Even More Mail from William!

Hey guys, Drew back here! It's been a very long week consisting of illness, stress, and school work. As most of you know, those three don't mix well, at all. However, I've been still active in the hobby, sending a few TTM's and making trades, more than I've done in certainly a while. I have a lot of stuff to share with you all, and I doubt you are any bit surprised that the first order of business is that of a package from my great friend William. William cracked open three jumbo boxes of the new 2012 Topps product, and was awesome enough to send over the Yankees cards he pulled to me! Take a look at those, as well as soon other cards he was nice enough to throw in: 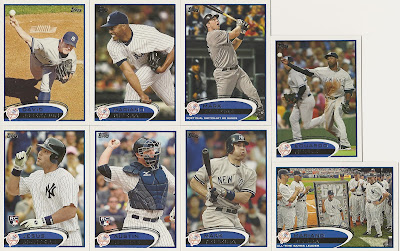 I really like the looks of the new Topps series from the small taste of it I've gotten here and there in the past two weeks. The design; while some people may disagree, looks very clean, simple, and does what most companies should try to do most- make the picture stand out. I feel like this is probably the most important part of building a strong overall design for a card: to focus more on the photograph than anything else. Some of the photograph selections in the past few years have been excellent, and a prime example of this is the honorary Mariano Rivera all time save leader card. It's a classy tribute to a classy player, without a doubt. 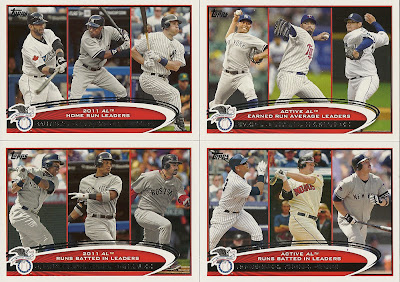 A special feature of the 2012 Topps set is that, along with the 2011 League Leaders subset, there is also the "Active League Leaders" subset, consisting of AL/NL players with the highest career batting averages; home runs; RBI's; Wins; ERA; and Strikeouts. I was kind of surprised to see that Jason Giambi has the 3rd Most RBI in the American League of any active players, with players such as David Ortiz and Paul Konerko still active. Then again, Giambi has seemed to be around forever, so I guess it's not that much of a surprise. I think the design on these cards could be improved, but they look better this year than they have in the past. 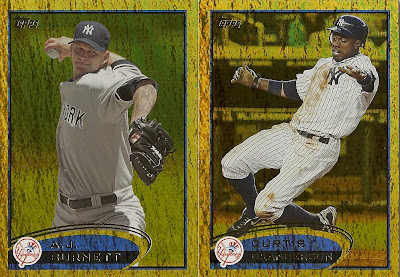 I didn't get a chance to share my opinions on the A.J. Burnett move, so I guess I'll take a little time out to do so. Well, the Yankees didn't certainly get a whole lot out of the deal, they DID get cap room, which they needed more than anything, to sign a left handed bat, which turned out to be Raul Ibanez. I'm glad to see him get an opportunity in a smaller city, because he certainly didn't shine under the New York City limelight. The Burnett signing just went to show that you have to be extremely careful before signing pitchers to big contracts. I watched the movie "Moneyball" today for the second time and without a doubt I can say that it's easy to find a pitcher to do just the job for much less money.

I really like the look of the golden parallels this year, although I do find it as a bit of a coincidence that Topps did away with the gold parallel cards the same year as the Golden theme occurred. I'm not upset or complaining though, because they were kind of just there most of the time. 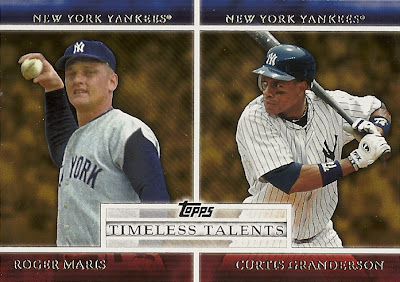 This set needs to be put to rest as soon as possible. Since 2010 from what I can remember, Topps has issued a set having to do with comparing two players. The idea died after the first year it was done in my opinion. There is no need to have a card comparing Maris and Granderson. However, with the shortage of Maris cards in the market, I still like to add his cards here and there. 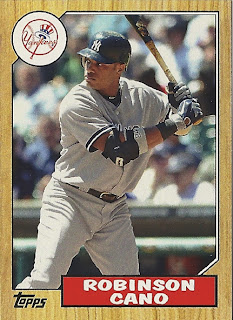 The last 2012 card William sent me between his two latest packages was this 1987 style mini of Robinson Cano, which will be added into my Robinson Cano collection! I kind of like this set, especially compared to the other inserts from this year's product. Cano is certainly going to be expected to have a big year, and I have no doubt in my mind that he will come through yet again. He is the best talent I've gotten the opportunity to watch on a day in-day out basis in my years watching baseball, without question. 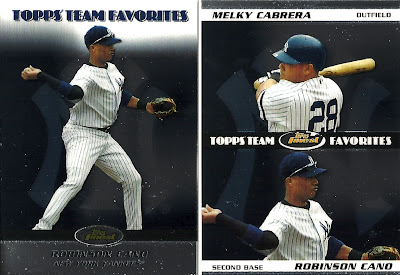 Speaking of Cano, William also sent a few other of his cards to fill holes in my collection, both of which from 2008 Topps Finest. I don't know if I'm the only person that feels this way, but doesn't seem like Topps Finest is always just there every year? It never necessarily seems to stand out, but it's never really completely forgotten. Anyway, I needed I believe both of these cards, so thanks for the help, man. 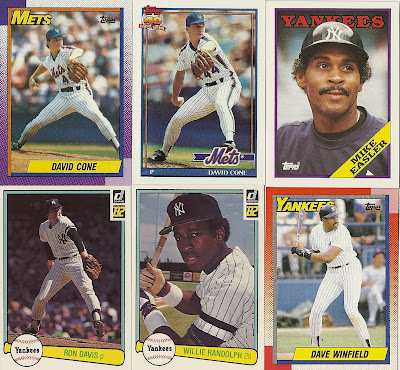 Finally, a few of the heroes from the junk wax era, such as Dave Winfield and David Cone. It's not common for someone to send me cards of great Yankee players on other teams, so I typically need them whenever they come my way. Or I have them somewhere deep within stacks of random binders, which really is a pain to go through. And of course, the legendary Ron Davis; also known as the guy whose autograph took forever to identify on my signed Mantle photo. Can't go wrong with that!

William, you are one heck of a guy, and I really do appreciate all that you do for me! I'm going to get you back one day, without a doubt! Thanks again!