Two More Tier One Relics for the Set!

Hey guys, Drew back here! A couple weeks back, I decided it was time to pick up a few more cards for my 2011 Topps Tier One set chase. I did well, only having to pay about $10 for the two, and a very cheap price for the first card! 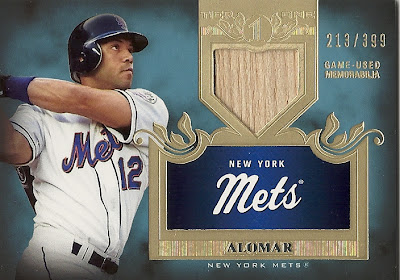 The first of two happened to be of recent Hall of Fame inductee Roberto Alomar! This card came in dirt cheap, at about a dollar plus shipping charges. I bought both cards from the same seller though, so there was combined shipping, which made it even better. This card is numbered out of 399 and features a piece of his bat, which is pretty cool if I must say. He was a very good player without a doubt, and it's only fair that he was included in the 50 card set. 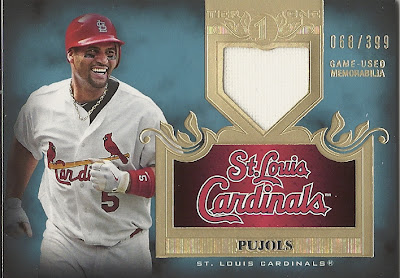 The second was of future Hall of Famer Albert Pujols! If this guy never has any suspicion of taking PED's in an era in which a good majority of baseball did, he could the best "Natural" player since Mickey Mantle. King Albert has a beautiful swing, a great glove, and an enormous fanbase that loves him to death. I'm certainly a fan of him, but I do kind of wish he stayed in St. Louis for the rest of his career. The money/business side of sports has been really killing the fun and tradition of the games. In a perfect world, Pujols would end his career as a Cardinal; Peyton Manning as a Colt; and Dwight Howard would remain a member of the Orlando Magic (given he does get traded at the deadline). Nonetheless, Pujols has helped given the Cardinals 3 pennants and 2 World Series titles during his tenure, so I don't think they should be too stubborn about his absence. They still have a great team and a very good chance at winning the Central this year. He wasn't the only defending champion, after all.
That will do it for me, but before I go, please check out my Tier One relic page, and if you have one of the cards not pictured, I would absolutely love to hear from you about a possible trade! Leave a comment or shoot me an email to yanks1996wsc@gmail.com! Thanks everyone!
See Ya!
Posted by Drew at 4:35 PM