Hey guys, Drew back here to finally wrap up the White Plains Card Show Review. Many bloggers seem to be able to pound out a whole show review within a few posts, but I prefer to go into depth on my pickups because it's not like I leave with a whole lot of money in my pocket, if any at all. The other day I thought about what my collection would be like without discovering these shows that take less than an hour to get to from here, and I couldn't even begin to tell you how much weaker it would be. I'm fortunate that I heard about them a few years back though, as I've gotten chances to meet players such as Don Mattingly, Dave Winfield, Ernie Banks, and even the whole Jets defensive line known as "The Sack Exchange"!

At this show, I was able to add two more legends to the list of people I've met, both of which have been enshrined into Cooperstown within the past ten years. I had an opportunity to meet recent inductee Roberto Alomar as well, but the price for an autograph wasn't very favorable to my show budget. Instead, I met a guy with over 3,000 hits on the back of his baseball card, and a guy who was one of the most feared power hitters of his era.
After waiting 2 hours in line for the free guys, I heard an announcement, saying it was the last call to meet one of the Hall of Famers I bought a ticket to meet. Dad had to take a few photos of the people in front and behind us in line with our camera because he had offered, since they didn't have cameras, and so following getting my Shantz and White autographs, he stayed there for a few moments getting their emails to send the pictures too. In the meantime, I took a mad dash through the show to try and make it before my player left, and fortunately enough by the time I got in the room, both Hall of Famers had absolutely NO line!
With Dad and the camera not being present at the time, it gave me a few extra moments to talk with third baseman Wade Boggs as he signed my photograph for me! Boggs wasn't just one of the best third basemen to ever live, but he was also the third baseman that helped bring my Yankees to the World Series in 1996- the year that I was born. "The Chicken Man" made 12 All Star teams, while nabbing a few gold gloves in his illustrious career, which resulted in 3,010 career hits and a .328 lifetime batting average! He was wearing his 1996 ring, which I complimented, and I also said thanks to him for helping bring New York Yankee baseball back on the map. He was grateful and kind, and signed my 16x20 photograph beautifully with one of the nicer inscriptions I own. 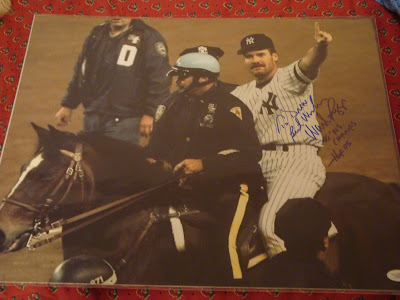 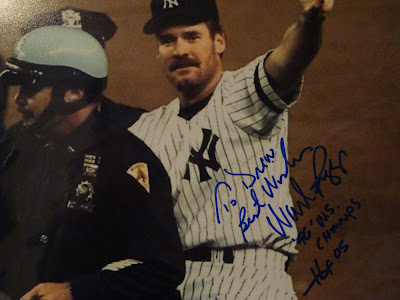 I couldn't come across any Boggs photo any more iconic than the one I was able to get signed, of him riding a horse after winning the World Series in 96'! The autograph came out beautiful, and the inscription reads: "To Drew, Best Wishes, Wade Boggs, '96' WS Champs, HOF 05". I just asked him to write it out to Drew, and then include whatever else he wished to include, and this went far beyond expectations. What an awesome experience. 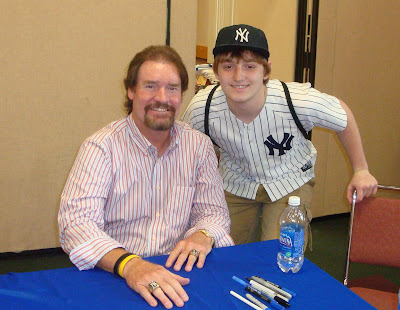 Dad ran into the side room where Boggs and I were a few minutes later, and was able to meet him and take this great picture of me with the 5 time batting title winner himself! After I met the next player, I went and got my picture certified for $6 from JSA, since they run discounts on the players signing at the shows. I can't wait to frame it up on the wall, especially because the picture was from my birth year!

The two of us then scurried through the Alomar line to meet another Hall of Famer with absolutely no line- Expos/Cubs great Andre Dawson! "The Hawk" charged the same price as Boggs, and while he was a little quieter, it was still well worth it. Dawson was elected into the Hall of Fame in 2010, in his 9th year of eligibility. With a career average of .279, with 2,774 hits and 438 home runs, this guy was by far one of the better all around players of his time. To add to his list of accolades, he also won the 1977 NL Rookie of the Year, as well as the 1987 NL MVP, to go along with 8 gold gloves and 8 All Star selections. So, to say he wasn't Cooperstown worthy is a tad bit ridiculous in my opinion. 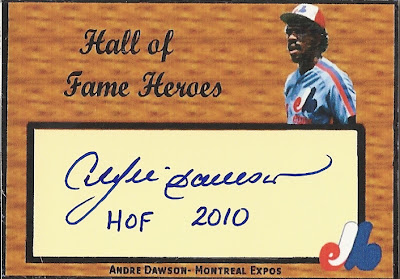 I had him sign a Hall of Fame custom for my set, which came out nice as always. He has one of the best signatures around, even though I don't necessarily understand why his 'd' in Andre drops down so low. Nonetheless, it looks really cool! The neat part about it, however, was that he signed the card sideways, and still managed a beautiful looking autograph! I've never seen anyone sign like that before, so I thought it was pretty cool. 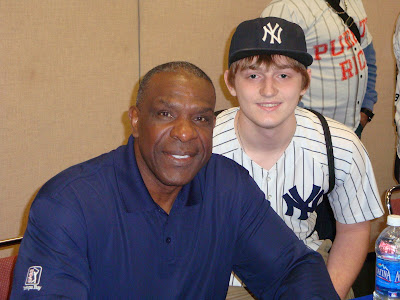 Dawson seemed like a very nice guy, and I was able to get this picture with him, which came out really good in my opinion. Dad is getting better at pictures every time, so I gotta give him props for that!

That will just about conclude my Card Show review post series. We didn't come home with any door prizes this time around, because we didn't necessarily see any need for the prizes, and we figured we would let someone else win this time! Dad and I had an awesome time without a doubt, and I just want to once again thank him for taking me and treating me with so many awesome cards to add to my sets! You're the best!