Mail from "Plaschke, Thy Sweater Is Argyle"!

Hey guys, Drew back here! Boy, am I taking my time with this whole "catching up" thing. I've got about 3 trades sitting on desk, along with a few TTM's, and some eBay pickups that haven't even posted yet. Oh well, I'll get to them eventually. First, I want to share my results of a trade I made with Greg from "Plaschke, Thy Sweater Is Argyle". Hopefully I will soon make enough trades with Greg that I will remember how to spell Plaschke without having to go to his blog. Anyways, Greg sent me all sorts of great stuff after I sent over my Russell Martin autograph, which he needed for his Martin collection. Take a look at what I got in return: 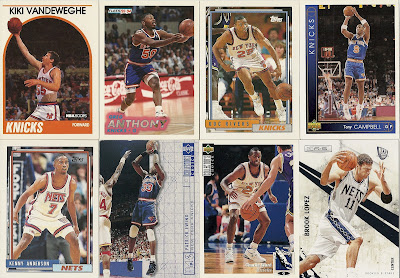 First off, Greg sent over a lot of very nice Knicks and Nets cards for my basketball collection! I prefer the Knicks over the Nets, but I am a big fan of Brook Lopez; and former Nets Vince Carter, Jason Kidd, Richard Jefferson, and Devin Harris! A lot of the players were out of my time period in this case, but I recognized most of the names, and its cool to see Celtics coach Doc Rivers on a card as a Knick! 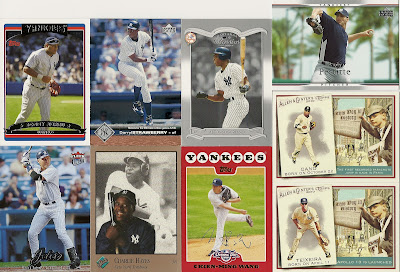 Getting back to my favorite sport, I was also sent a bunch of nice Yankees for my collection! I never saw the Daryl Strawberry and Alfonso Soriano cards before, so I'm glad I was able to finally add them. 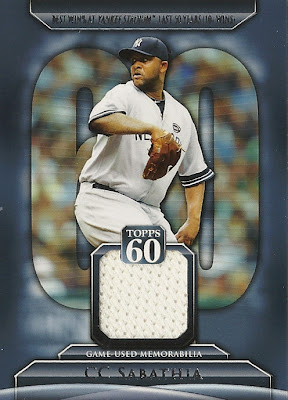 There is nothing more exciting than opening packages that contain multiple relics and autographs inside them! Greg sent 5 of which in this package! The first was this awesome 2011 Topps CC Sabathia relic card, which is just a really great card all around. The relic isn't the plain white jazz you always get these days, but instead looks to be a different part of the jersey. I'm not exactly sure where, or if this is even from his Yankees uniform (I'm guessing Brewers), but if anybody has a reasonable guess, please leave it in the comments because I'm very curious to find out where this is from! 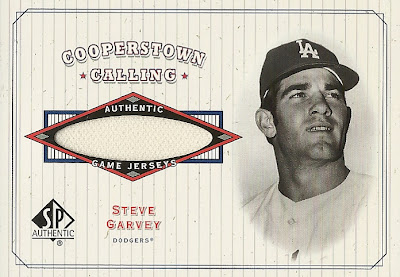 I doubt many of you have seen my "Secondary Collections" page, which contains a list of all of the other things I collect, and my current status at achieving Trifectas of as many people that I've met yet. If you can recall, I happened to meet Steve Garvey way back when, and after adding an autograph of his to the collection, I still was in need of a game used relic and a rookie card to complete his trifecta. While I'm still in need of the 1971 Topps Steve Garvey, Greg helped me out by sending over this 2001 SP Authentic "Cooperstown Calling" relic! Unfortunately, Garvey has never gotten a call from Cooperstown, but after looking back at his career statistics, he honestly deserved more of a chance. 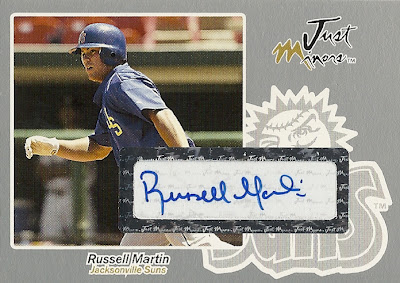 Hey, what do you know? It's a 2005 Just Minors autograph card of Russell Martin! If you remember correctly, I mentioned at the beginning of the post that I traded my Martin autograph in order for this trade to work out. It turned out that Greg is a big Russell Martin Supercollector, and he had duplicates of a rookie autograph of his that he could send over to me in exchange for the one I had, which he needed badly for his collection. I was fine with dealing my autograph, and I'm certainly content with this one here. It's numbered 75  out of 100, and while the design is lacking something in my opinion, the autograph is there which is all that matters. As a side note, I really like Martin's signature; in my opinion its one of the better ones in baseball today. 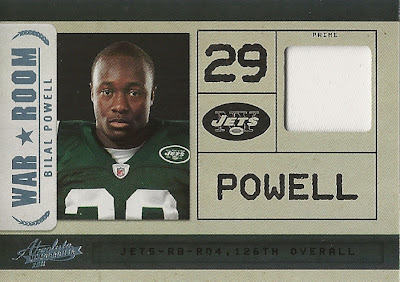 The final two cards were both of my beloved yet disappointing Jets. First up was this awesome "War Room" prime relic of rookie running back Bilal Powell. I don't know much about Powell, besides the fact that he was the 4th round pick last year and he didn't get much playing time last season. This card is supposedly a patch card, although no other colors are showing. It's also numbered very low, at 9/50! Hopefully he'll pan out someday! 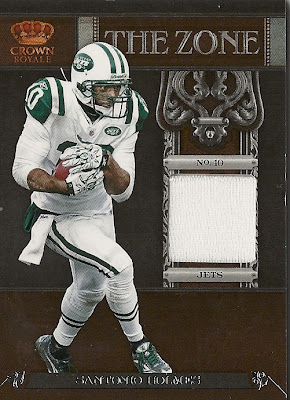 The final card was of everyone's favorite wide receiver who doesn't like to shut up, Santonio Holmes! Holmes has certainly had issues on and off the field during his entire NFL career, but somehow I still love watching him play. If people have a problem with him as a team captain, don't make him a captain then. Other players can fill the roles much better. He has a lot of talent but that doesn't translate into a good leader always. He already signed a lengthy contract with NY prior to last season, so he won't be going anywhere. I love watching him make great catches in clutch moments, and hopefully the best is yet to come! This career is numbered 2/99, out of 2011 Panini Crown Royale!
Thanks so much Greg for the trade! I really appreciate it and I hope to deal with you again! Everyone please go give his blog a look!
See Ya!
Posted by Drew at 12:12 PM