Hey everyone, Drew back here. For some odd reason baseball was cancelled today, perhaps because it got to be too nice out? Oh well, anyway, since I'm stuck here in my office room, I might as well continue on the card show review! We're now moving on to Part 4 of 6, dedicated to my experiences getting to meet two former players! Both of these players were free autograph signers for the day with paid admission into the show, and had by far the longest line I've ever seen at the County Center. I'm still stumped as to why, because both players weren't necessarily stars, but a free autograph is a free autograph without a doubt.

The first player I was able to meet was former All Star pitcher Bobby Shantz! Shantz is one of those old school players who is now in his upper 80's, but the coolest part about him was that he not only was a very good pitcher, but he had opportunities to face some players us fans idolize today, in Mantle, Mays, and Jackie Robinson. He was an 8 time Gold Glove winner, which really is a hard accomplishment to achieve in baseball for a pitcher. Also, adding to his remarkable list of accomplishments, he also won the 1952 American League MVP after winning 24 games! With a career record of 119-99, he was certainly one of the better pitchers of his era. I actually already got his autograph from a past TTM success, but with a chance to meet him for practically no cost was something I didn't want to pass up.

Unfortunately, I was stuck in line for an hour and a half, and that's just being nice. However, the wait was definitely worth it, as I was able to finally meet Shantz and have him sign a few things for me. I don't quite remember how it came up, but I was able to thank him for signing for me through the mail, and how appreciative I was of that. He seemed like a really nice man, without question. 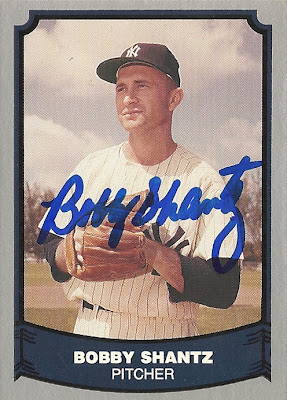 He first signed this very nice 1988 Pacific Baseball Legends card, from the same set I recently got a Roy Sievers autograph from. I discovered that I had quite a few of these cards laying around in my basement, so I decided to try and get some of them autographed, because they always seem to come out great. This was certainly no exception to that. Shantz has by far one of the nicest all around signatures I've seen.
For the other free ticket Dad and I had on us, I decided to do something pretty neat, at least from what I think. I bought a cheap 8x10 off of my favorite photo dealer at the show, and I paid the JP's Sports guys for an inscription. I asked Mr. Shantz if he could write a little something about the photo on it, and he went right ahead and did that for me, which was awesome. I thought it came out pretty darn good. 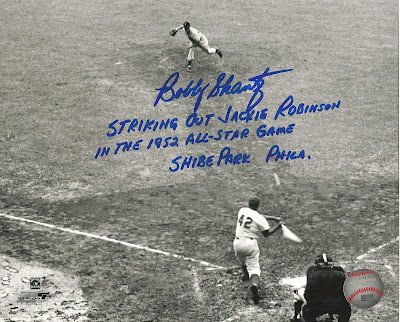 Yes, the photograph is from the 1952 All Star Game, where Shantz showed off in his MVP season, striking out three batters in a row- Whitey Lockman, Jackie Robinson, and Stan 'The Man' Musial! It shows Jackie swinging at the pitch in the at bat he struck out in, which was really something neat. It's rare to get a chance to meet someone who pitched against one of the biggest American icons, so I always wanted to remember the opportunity I had to meet him. I asked Shantz how difficult Jackie was to face, and he said that he was a very tough hitter, but he was able to get him in that at bat. 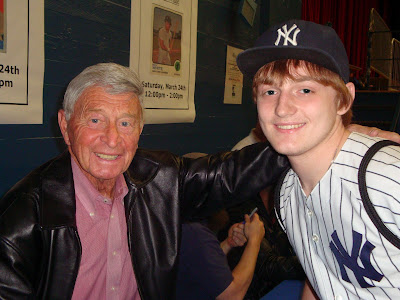 Without a doubt meeting Bobby was something I probably won't ever forget, and I'm glad I took advantage of the opportunity I was given. He was a class act, and I was able to take home some pretty darn awesome autographs! On a side note, he looks very good for 87 years old. God bless him.
Immediately following my encounter with the 1952 AL MVP, I moved right along to the next free signer, former Yankee Roy White. This wasn't the first time I met White, or even the second. This was the third time I've met him! I've always thought he was a class act guy and a good autograph to have, so I've taken advantage of getting to meet him in the past. In fact, back in 2006, he became the first Major League athlete I ever met. So, with this time around, besides picking up a nice autograph for Connor to give as a gift, I decided to do something special. The night before I met him, I decided not to have him sign my Mantle autographed photo just yet, because I had another idea in mind. 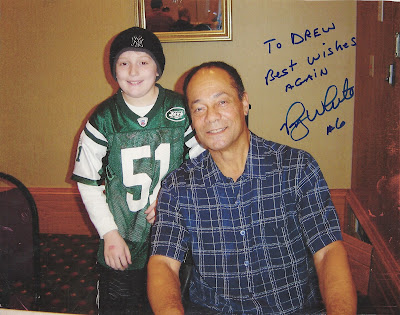 It came out a little smeared on the right side, but nobody has really noticed it too much until I point it out. The picture was absolutely fine until he signed it, so maybe his hands were greasy or something because there was a thumbprint on the side. Or I was just being stupid. Who knows. Anyways, I now own a signed photograph of my first encounter with a professional athlete, which was something I always thought about doing. He inscribed it out "To Drew, Best Wishes Again, Roy White #6". I have five or six of his autographs already, but this one shot right up to number one.
White seemed a little out of it that day, but he was still nice enough to add a nice personalization and what not. He's a good guy, but I'm sure he was sick of signing by that point, especially with the line that still awaited AFTER I was done waiting over an hour for them. 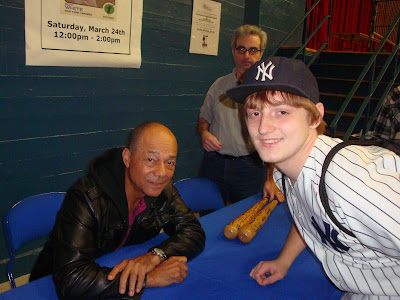 So, these two experiences already had made my day, but it only got better as I proceeded to meet 2 Hall of Famers! I'll post those signings tomorrow!
See Ya!
Posted by Drew at 7:16 PM