Hey guys, Drew back here! This is a bit of a quick post, especially since it's been so difficult to post on school nights, but I did want to share my final card I bought at the show, before I get into who I met and my experiences with them! I paid a decent amount of money for this card, but hopefully it will be well worth it in a few years. Take a look: 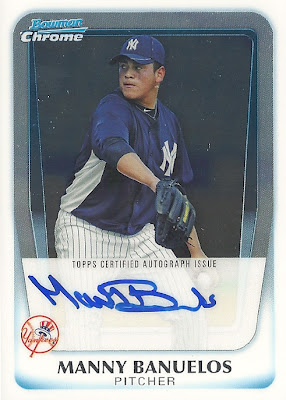 Out of 2011 Bowman Chrome, I picked up this beautiful Manny Banuelos chrome rookie autograph! I got a fairly solid deal on the card, and I've been meaning to add his autograph to my collection. Banuelos is the Yankees current top pitching prospect, and is the 13th best prospect in all of baseball according to the Scouting Book. He isn't a big guy by any means, but his fastball has consistently been at 93-94 mph while he has the ability to hit 97 as well. He may not be a household name for a few years, but with risk comes reward, and I was more than willing to take a chance on this guy for my Yankees collection.
What do you guys think of Banuelos? Good/Bad Buy as of Now? It won't offend me one bit if you disagree!
See Ya!
Posted by Drew at 8:27 PM