Hey guys, Drew back here. About a week ago I was really excited to get a package in the mail. It had been a few days between packages, so I was ecstatic to see more in the mail. Unfortunately, I got a little too excited, and a bit of the result of the TTM success was ripped in the process of opening it up. However, I was able to tape it up enough that it won't look all that bad, and I was able to preserve greatness at it's finest. The player signed two items for me, so I guess I'll start with the card he signed for me: 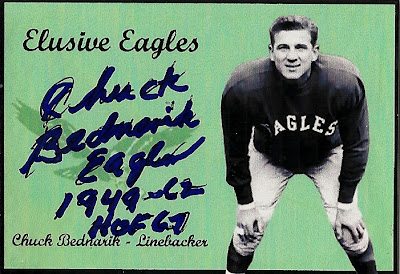 The success was from none other than Hall of Fame linebacker Chuck Bednarik! Bednarik was without a doubt one of the best defensive football players of all time, and he played an awful long time ago, as shown in his inscription, "Eagles, 1949-62"! It's noticeable that Chuck signed the card originally in pen, but then went over it in sharpie. I find it unreal to see how close he was to duplicating the signature perfectly. I guess after being perhaps the most renowned football TTM signer to Peyton Manning, your signature becomes almost robotic. I think this custom just came out great signed, and it gave me hope on my future TTM's I have out there. 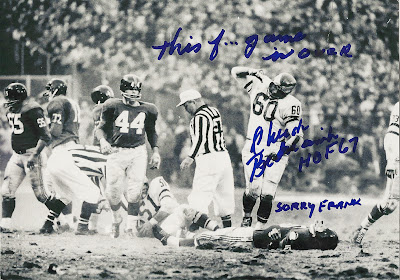 Unfortunately, this photograph got a little ripped, but nonetheless it looks unreal. This 5x7 photo is one of the more recognizable photographs in NFL history, showing the celebration following "Concrete Charlie's" knockout of football Hall of Famer Frank Gifford. The hit he put on Gifford knocked him out of football for a year and a half, hence the "Sorry Frank" inscription laying right above Gifford's face. On the top of the photo, he inscribed it "This f...ing game is over", which is not only hilarious but just really awesome in general! The first time I saw those inscriptions on someone's TTM success from him made me desire the same piece in my own collection. It came out way too perfect.

Bednarik not only played as a linebacker but also as a center on offense as well. He played in 15 seasons for Philadelphia before his retirement, while making 8 Pro Bowl's in the process! He was a member of the NFL's 75th Anniversary All Time team, and clearly one of the better defensive players who have ever lived. I sent this back in May of 2011, so it took an awful long time to receive back, but it was well worth the wait. If I can recall correctly, he was quite ill a little after I sent the picture, so I basically wrote it off, but when he recovered he must have found some time to sign for me!

So, if you're a football fan and you want to add a cool piece to your collection, I would highly recommend getting a copy of the photo and sending it off to Mr. Bednarik. If he gets you back, he will hook you up without a doubt!