Hey guys, Drew back here! Now that the show review is over and done with, I should probably catch up on all of the other cool stuff I've gotten in lately! I met young blogger Andrew through William, and him and I were able to work out our first trade. Take a look at what I got out of the deal: 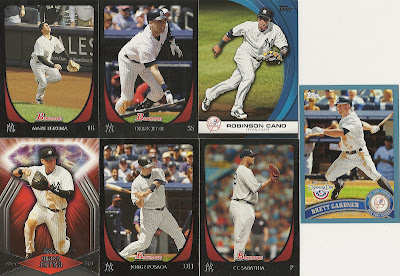 First were an awful lot of cards from last year that I didn't seem to have yet in my collection. I might've already gotten one or two of the Bowman cards in this scan, but outside of that, everything else was new to me! The Brett Gardner blue border is the 2011 Topps Opening Day parallel numbered out of 2011, and the Derek Jeter card is the retail diamond card (not the actual diamond anniversary set card). Also, the Robinson Cano card is one I would've never known existed had it not been for Andrew, and I'm still unaware of what set it's actually from. 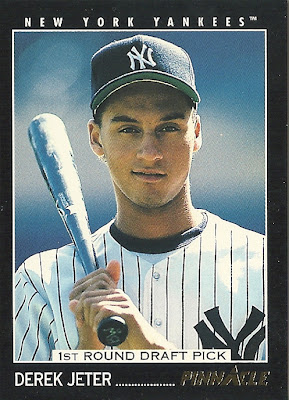 However, the centerpiece of the trade was most certainly this 1993 Pinnacle rookie card of "The Captain", Derek Jeter! I have a lot of various Jeter rookies, but somehow this one had managed to escape me for a long, long time until now. It is probably one of my favorites thus far, until I manage to get a hold of the SP Rookie, which will probably continue to haunt me for quite a while.

So, thank you Andrew for the awesome stuff! I really appreciate you giving up this rookie to help my collection, and I hope you enjoy the Cardinals I sent!