Hey guys, Drew back here! Well, it's about to be that time again, in which I spend many hours on the baseball diamond working to become a better player. Our school tryouts are on Monday, and I have to say I'm very worried about the overall ability and future outcome of our team. Our coach is a new guy in town and he doesn't know our talent well enough to be able to fairly cut players. To be honest, I don't think you can judge a player's ability by how they field ground balls on a hard wood floor. But it is what it is. Anyways, about a week ago I received one of the most unexpected TTM successes I've ever gotten back before. My 81st Through the Mail success just so happened to be of a player who did awfully darn well in the big leagues last year. Have a look see: 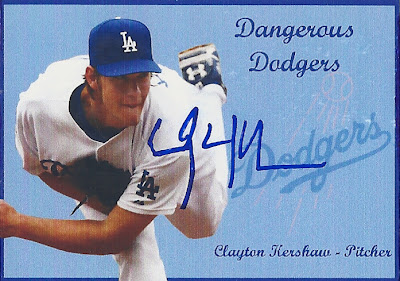 Behold, an autograph of the 2011 National League Cy Young award winner, Clayton Kershaw! Kershaw is turning into one fine young pitcher, and at the age of only 23, it's almost scary to see his numbers three or four years from now. Considering he was able to top Roy Halladay, Cliff Lee, Tim Lincecum, and the rest of the National League in wins, strikeouts, and ERA is just unreal. In the last 30 years, the only other pitcher that has done what Kershaw did at his age was Dwight Gooden back in 1985. He is without a doubt a special kid.

This success took roughly 380 days to get back. And no, there was not one typo in that last sentence. I sent it way back on February 7th of last year, to the Dodgers Spring Training complex. Apparently many collectors recently got back from him, so I wasn't alone, which is great to see in our hobby. I'm really happy with how the card came out, even though he doesn't seem to have the greatest of autographs. Can't complain one bit though.

Did any of you guys also hit jackpot with a Kershaw success?