Hey guys, Drew back here! After three days of tryouts, it is official that I made my school's JV team for the second year in a row! I was able to shine during batting practice and infield enough to earn myself a spot on the team, which without a doubt made my day. Anywho, I received a TTM success about a week or two ago from one of the older living baseball players. Take a look: 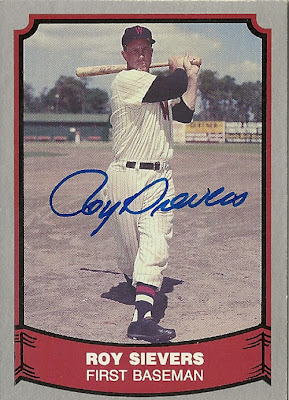 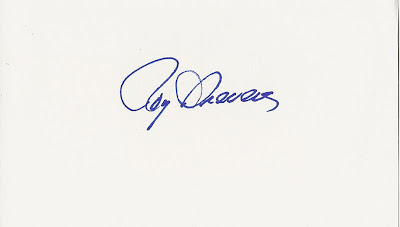 Former first baseman Roy Sievers signed both a card and an index card for my collection! Mr. Sievers was certainly one of the more underrated players through the decade he played in, playing for the Browns, Senators, White Sox, and Phillies. He started his career on a tear, batting .306 with 16 home runs and 75 RBI, en route to winning the 1949 American League Rookie of the Year award. He made 4 All Star teams (was selected to both games in 1959) in his 17 year career. In total, Sievers amassed 1703 career hits, 318 home runs, and a lifetime batting average of .267. Without a doubt, he was an above average player in the era in which he played.

Sievers took about a week to get back, which was very awesome. Both autographs came out very nice, especially the auto on the 1988 Pacific card.

Thank you Mr. Sievers! See Ya!

P.S. I recently opened up a new page dedicated to all of the "Trifectas" I could find in my collection! Check it out and leave a comment here letting me know what you think if you get a spare minute! Thanks everyone!
Posted by Drew at 8:20 PM