Mail from the Pirates Treasure Room!

Hey guys, Drew back here. Man, do I have a lot of stuff to post. This is about as good of a time to be a baseball card blogger right now, when you literally can hardly see your desk because it's so cluttered with stuff! One of such endless stacks of cardboard happened to come from a blog that is filled with Pittsburgh Pirates treasure! My good buddy Brian from "Pirates Treasure Room" and I hooked up for a pretty solid trade all around! Take a look at some of what I got in my side of the deal: 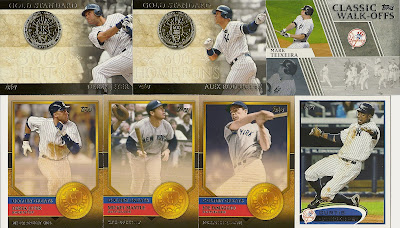 He kicked off the trade with some really awesome 2012 Topps cards! I haven't bought one single pack of the new Topps. Yeah, I feel like I'm breaking one of the card collecting commandments with that. But I'll get my hands on some eventually. I'll probably have most of the Yankees inserts by then, thanks to all the awesome bloggers sending me them, but that'll be perfectly fine with me! I have to say I love the Walk-offs Concept but the design sucks; I like the Gold Standards for the most part; and the Golden Greats are alright I guess. 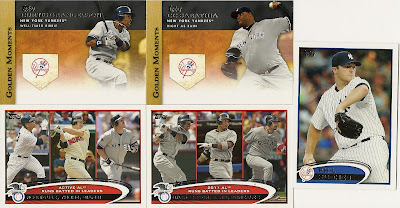 The inserts that shouldn't have ever happened were definitely the Golden Moments cards. For relics, I can see it. But for plain old boring inserts? Nah. Nonetheless I needed a good majority of the 2012 Topps cards he sent over so that was certainly appreciated an awful lot. 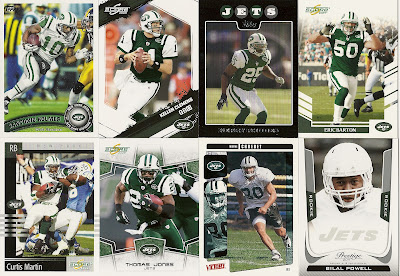 Brian also recognized my Jets collection, and sent over quite a few of them to me! As of what I've seen, 2011 was the year of Bilal Powell overload in football cards. While I like him, I can't see many others liking him all that much. After all, he is a 4th round pick, so it isn't all that intriguing to pull his autograph in practically every other pack. On a second note, I always love some Curtis Martin and Wayne Chrebet stuff, because they were two of the guys that got me into football in the first place! 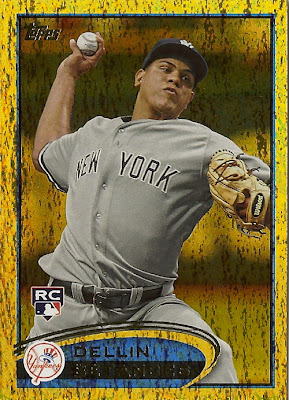 I absolutely love the heck out of this card! I mean, the diamond/gold subject does tend to get a little old after a while, but nonetheless I still find this to be an awesome looking card of an awesome up and comer in Betances! He showed a few signs at the end of last year when he was called up, so hopefully he has the potential to make the Yankees rotation one day. 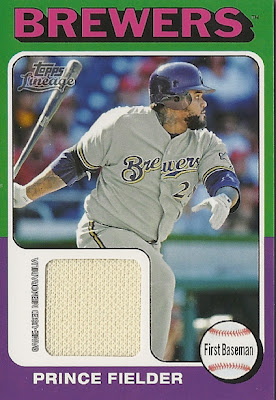 I've been wanting to get a hold of one of these Topps Lineage relics for a while now, and when I saw his Prince Fielder relic in his for trade bin, I had to ask. I'm definitely a big fan of Prince, and although I prefer him in that Brewers uniform, I'll continue to like him even if he steals all Teixeira's All Star votes! These are really cool looking cards though without a doubt. Certainly something new and inventive, which is nice to see in the hobby. 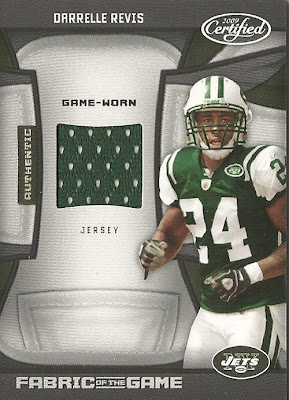 My favorite card of the trade, however, was this 2009 Panini Certified Darrelle Revis relic numbered out of 99. For a while I thought the future face of the Jets franchise would definitely be Mark Sanchez, but it seems like I guessed wrong! Considering there have been rumors flowing around about whether the Jets should go after Peyton Manning clearly shows the Jets don't believe all that much in the "Sanchise" either. Revis is one of the most talented athletes in the sport without question, and he sure is a talent to watch. Well, you don't see him often because he's never thrown towards by any quarterbacks. I don't blame them, because their completion percentage almost always only goes down when he's on the job. Anyways, the card is numbered out of 99 and I absolutely love the Jet-green relic. That color right there has always been my favorite color.

So, this was certainly an awesome trade. Thanks so much Brian for the all of the great stuff! Everyone please go give his blog a look, he's got some great stuff to show off!