A Great Unexpected Surprise From Dad!

Hey guys, Drew back here. Wow, has it been a while or what. I haven't even posted once yet this month until now, due to an enormously packed schedule, you know, my same old excuses. Anyway, I can't really promise to stick around a whole lot over the next three months, due to school ending and baseball heating up. My JV team is now 2-0, and we mercied our opponent 15-0 yesterday, so it's looking like it's going to be a great season for us! I'm having a great time with it, and hopefully we can keep up the run we're on.
Anyways, I don't think a whole lot happened around here while I was away, but I've still been able to add quite a few nice cards to my collection during my absence. Some of which were long overdue on here, like all of this for example. Before the card show, Dad came home one day from work with a bit of a gift for me. Why? I have no idea, I guess just because he's awesome. While I continue thinking about why he did all this for me, you guys can take a look at what he came home with this time around: 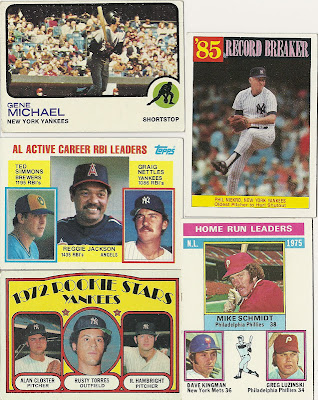 We start with a few solid cards from the 1970's and 80's, most featuring at least one Yankee on it. He told me he got all of this from a local store with collectibles that we haven't been to before. Speaking for the Active Career RBI Leaders card; I find it pretty darn hard to see Reggie in an Angels uniform. A's? Yes. But besides that, it just looks weird. PS, there's more of Reggie coming. 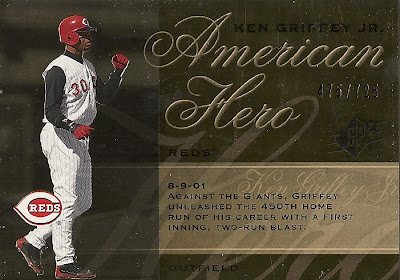 Next is out of 2008 UD SPx, from the Ken Griffey American Hero numbered insert set, which was probably one of the weaker insert sets from the past decade. I mean, Griffey was awesome, but I don't think any of these large insert sets of the same player ever seem to do well (see: Mantle Home Run History; DiMaggio Home Run History; A-Rod Home Run History; all of those 2007 Topps inserts). This card is about his 450th career home run against the Giants, which is pretty cool. 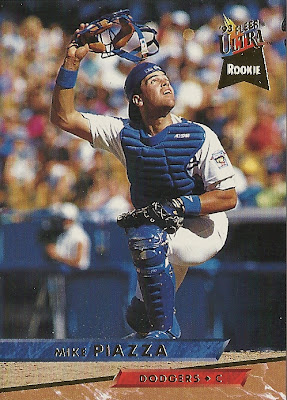 Following up is this 1993 Fleer Ultra rookie card of Mike Piazza. Piazza was a little out of my time frame, but he definitely showed that catchers sure did know how to smack a baseball into the stands. He certainly went down as one of the top catchers of history, although I'm not necessarily a big fan by any means. Still a good card to have. 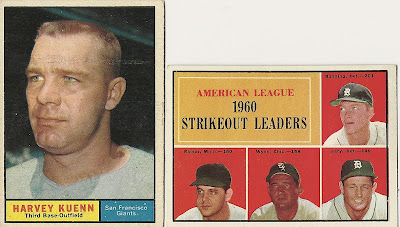 Following that were these two 1961 Topps cards going towards my set! I believe I didn't own the Harvey Kuenn card yet, but I know I had the leaders card, because I already knocked all of those off the list! Still I can put my doubles to good use, either by trading them or maybe even use them as fillers if they're nicer than my original. 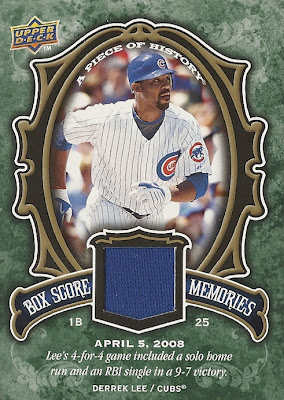 This 2009 UD Piece of History Derrek Lee starts off an awesome slew of relic cards to add to the collection. Lee certainly had a few monster seasons in his career, and I always thought he was a pretty solid player. This card is for trade, if anybody is interested in the card. 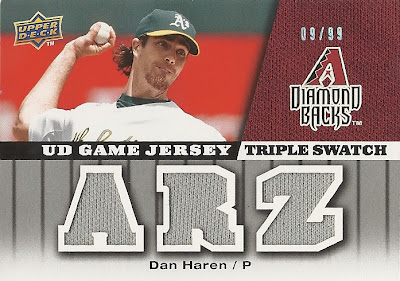 However, this 2009 Upper Deck Dan Haren triple relic numbered to 99 is not for trade! Instead, this sweet relic happened to finish off my Haren trifecta, which can be seen on my trifecta collection page! I've always liked him a lot, although not many people ever give him the credit he deserves. That Angels pitching staff sure is scary this season. 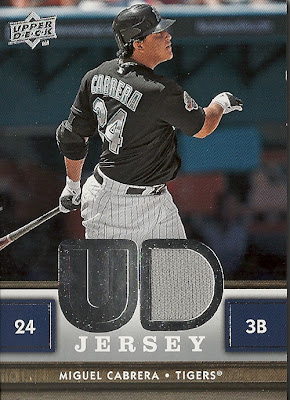 Speaking of scary teams, how about those Tigers? A lot of analysts are jumping all over Detroit's hot start to the season, some even taking them to win the Pennant. If their pitching holds up besides Verlander, and their big hitters stay healthy, they'll be a scary team to face in October, for sure. Here is a 2008 Upper Deck Miguel Cabrera relic! Cabrera has been perhaps the most consistent player in baseball for a few years, and now with Prince Fielder batting behind him; watch Miggy take home the MVP trophy this season. Coming from a Yankee fan. 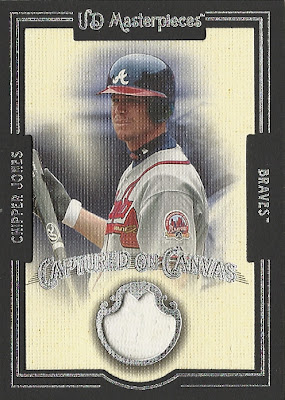 How about a relic of perhaps the classiest person in baseball these days, Chipper Jones. It's out of 2007 UD Masterpieces, which as I've said is one of my favorite sets from the past decade. I hardly get to watch Chipper play, but all I know is he's a certified Hall of Famer one day, and I doubt many hits I'll pull in the future will top the one I hit of his a few years back. 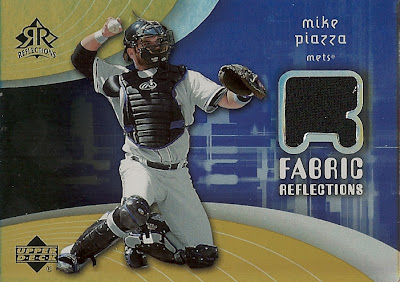 Getting back to Piazza, here's a nice relic of his, out of 2005 UD Reflections! Like I stated before, I really don't own much of Piazza's cards, and I'm not a diehard fan, but it's a neat card to own, for sure. I don't see any catcher in baseball today who hit with the power this guy hit with. Certainly a once in a blue moon kind of player. 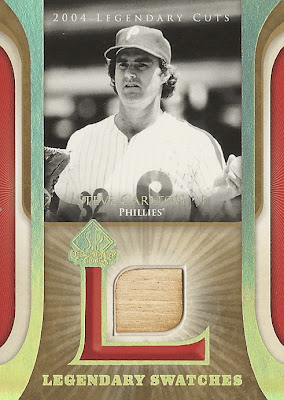 How about a bat card of one of the best pitchers to ever step on the field, Steve Carlton? Certainly a different idea by Upper Deck, although I've seen it before. National League pitchers do bat, remember. Sure, they're almost always an automatic out, but their bats still play a part in the result of the game. Most collectors I know would prefer a nice jersey with a Phillies pinstripe, but I like it. To go along with it, the it's very colorful and all around a good looking relic card. 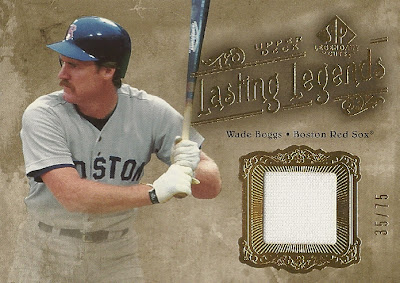 Iw. It's a Red Sox (sock?). But, fortunately, it's one of a player I actually like a lot, Wade Boggs! If you follow this blog well enough, I recently got the pleasure to meet Wade at a card show, which was really special for me. The photo he signed for me will soon be hung up on my wall in my room, and it will always be one of my favorites in my collection. This card here is out of 2005 SP Legendary Cuts, and numbered out of 75. Even though he's in that ugly Red Sox uniform, I guess I can deal with having it in the collection! 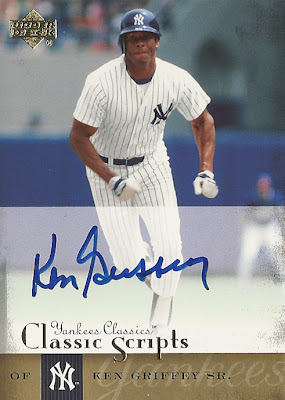 Finally, Dad was also able to pick up two awesome Yankees autographs. The first of the two was this slick looking Ken Griffey Sr. auto out of the Upper Deck Yankees Classics series! This isn't the first Griffey auto I've gotten before, but I definitely don't mind adding another! He certainly has great penmanship, which adds even more to how truly great this autographed set looks.
As great as that card, as well as the rest of these are, not only can top this one. I told you there was more to come from Mr. October right? Hmmm.... 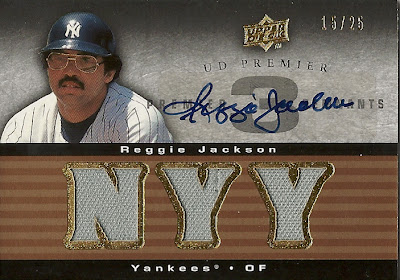 2008 Upper Deck Premier triple relic autograph, numbered 15 out of 25, of Reggie Jackson. THE Reggie Jackson, as in one of the best sluggers the game has ever seen! Dad must not have been completely content after getting me my first Jackson auto for Christmas, so he thought I could use this one as well! I feel so spoiled, but boy is this a heck of a card. It looks sweet in person, as do most of the cards from the Premier set. Besides Thurman Munson, Reggie is my second favorite player from the 1970's Yankees teams, with Goose Gossage and Sparky Lyle in a close tie for third and fourth. I doubt I'll be able to add a Munson autograph anytime soon, if ever, so getting more of Reggie is always cool.

So, for the billionth time since I began collecting, Dad spoiled me with awesomeness once again. I can't begin to describe how speechless I was when I opened this, and as I said before, I don't even know what I did to deserve all this. Thank you Dad, so much.