Hey guys, Drew back here. I haven't opened a pack or broken a box in ages, but thanks to eBay, I've been able to get a little taste of a lot of the new products. One of these products was the new Topps release, Museum Collection! It is yet another high end, clean, and top of the line release by Topps, and another I can dream of actually having the guts to buy a pack of. Nonetheless, for the singles collector that I am, this set is a major win for me. Take a look at the first two cards I've been able to add from this set: 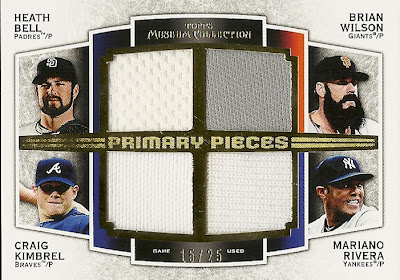 First, I was able to win the auction for this quad "Primary Pieces" relic numbered only out of 25 of 4 of the better closers in baseball: Heath Bell; Brian Wilson; Craig Kimbrel; and Mariano Rivera! Granted, Bell has blown 3 save opportunities, and Wilson is unfortunately shelved for all of 2012, but over the past few years they have both been as dominant as can be! Kimbrel had an unreal rookie season, and he's off to a great start in 2012, and well, everyone knows Mariano and how much of a legend he is. It's a good looking card all around, and it'll go into my Yankees PC due to the Rivera jersey swatch being included on the card. 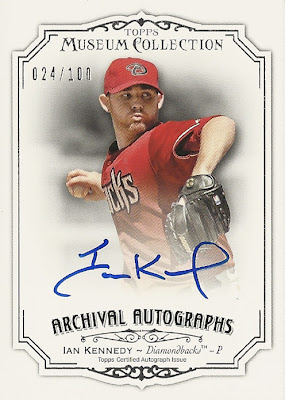 Second, and finally, I added this "Archival Autographs" card numbered 24 of 100 of Diamondbacks stud Ian Kennedy! Kennedy started his career in the Yankees system, and I'm not going to lie, I was really glad they traded him off when they did, as a part of the Curtis Granderson deal two years ago. Fortunately for Kennedy's sake, getting out of the AL East was a blessing from the skies, as he went on to show why he was a top prospect last season, winning 21 games and only losing 4! He finished 4th in Cy Young voting and had most Yankee fans, including myself, completely stumped. This season he's gotten off to another solid start, winning 3 games in his first 5 starts, without a loss.

It's safe to say the Diamondbacks really lucked out with this guy. I've always wanted to see him succeed, and although he couldn't do it in New York (which not everyone can), I'm glad he was able to put it all together and show off his potential. I picked up this beauty for about $10, and I thought it was worth every penny.

What do you guys think of Museum Collection? See Ya!
Posted by Drew at 3:56 PM