Mail from my buddy Andrew!

Hey guys, Drew back here! It's been a very busy month for me, maybe not so much on this website but in all other aspects of my life, time is flying. Sophomore year is coming down the home stretch, and before I know it I'm going to be awaiting junior year while soaking up the sun on a cruise over summer vacation! All is going well here, and I'd like to once again thank each and every one of you readers for taking out the time to check what I've got to say. I just received surpassed 100,000 page views (not including my own), and it is something that really does mean a lot to me, not because of the number, but because I'm proud of how I've made somewhat of an impact towards other collectors. The goal all along was not only to show off what I've been able to add to my personal collection, but to share my love of the hobby in hopes to spread the love of the game of baseball.

One thing I've always enjoyed doing in this hobby is trading, and although I haven't been on top of my trades very well of late, my new good friend Andrew has certainly tried to bounce me back into my flow. We worked out our second trade a few weeks ago, and this was what I got in exchange for a Cardinals autograph: 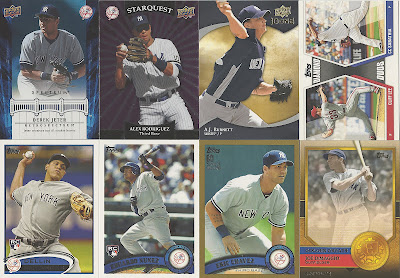 Here are a few of my favorites of the Yankees cards he sent. I love the 2012 Dellin Betances Topps rookie, and I'm definitely going to have to pick up a few more to stockpile up on him. He's not doing very well in the minors from what I've heard, but he has a heck of a lot of potential. I didn't have the A-Rod starquest surprisingly enough, but I'm glad Andrew sent it my way. Also, that Eric Chavez gold parallel is pretty nice as well. 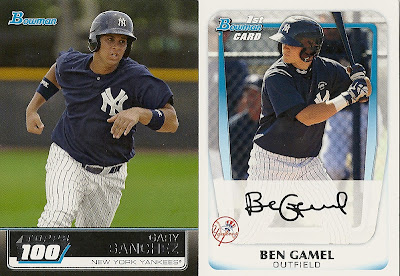 Next are a few well known Yankee prospects, in Gary Sanchez and Ben Gamel! Sanchez has perhaps the most potential in their entire farm system right now, and because of that, they thought dealing Jesus Montero would be a smart move. I understand that thought process, but I really think we could've done better than Michael Pineda with what we have to offer. I'm very disappointed in Pineda thus far, but he's extremely young with a lot of potential so I'm just going to give him some time first before making final decisions. Gamel, on the other hand, has bounced around quite a bit in his few years in the Yankee system. He had a very good 2011 season in the Staten Island, so hopefully he can carry that into his 2012 campaign. 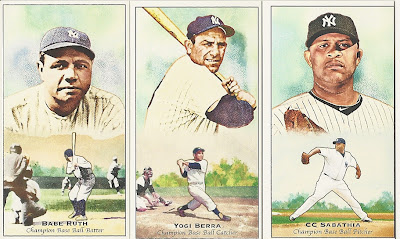 Finally, some Kimball Champions topped off the deal! I've made this very clear on here before, but I'll say it again: I LOVE these inserts. Why? I really don't know, they're just appealing to me. I probably have these same three minis somewhere in my basement, but I'll take every single one you guys have! Maybe one day I'll go after the whole set. For now, here are the Ruth, Berra, and Sabathia minis.

So, thank you so much for the trade Andrew, I really appreciate all the attention you've given towards my collection the past few weeks. Everyone please go out and give his site a look, because believe me, everyone loves a new blog to read, right?