The Man Who Ruined Fenway's 100th Joins My PC!

Hey guys, Drew back here! Yesterday, my JV coach gave us all a break from practice, because we've played so much of late. While I absolutely love playing baseball, I was glad we got this break because not only was I extremely exhausted but also the Red Sox vs. Yankees game was an earlier one and I wanted to catch the game! It was certainly a special day in Fenway Park, as the Sox honored their past and present greats in celebration of their stadium's 100th anniversary. While being a Yankee fan, I thought it was really nice what they did for the fans, because no matter who you are, you have to respect the tradition and greatness of Fenway Park. I would love to go there sometime just to see what it's like, but all that is for another post. When gametime came, it was all about my Yankees ruining the party!

They most certainly did ruin the party, knocking Clay Buchholz around for 6 runs, 5 of which coming from home runs! Ivan Nova won his 15th straight decision, which is unreal for a guy as young as he is to accomplish, by a final of 6-2. The game would've been much closer if it wasn't for their backup 3rd baseman, experienced veteran Eric Chavez, who hit two solo home runs en route to the victory! I happened to just recently pick up an autograph of Chavez, so it was only fitting that he did so well the other night. Take a look: 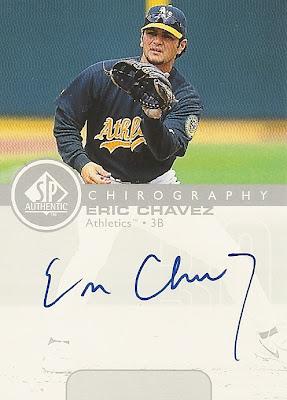 This Chavez auto came out of 1999 SP Authentic's "Chirography" subset, which was made during his best years of his career. The 6 time Gold Glove winning 3rd baseman has hit 232 home runs in his very solid 15 year career. He won't be considered one of the best of the best when he's all said and done, but he has been a pretty solid all around player for a long time, which has to say something. Another thing I like about him is that he was one of the better players on that "Moneyball" team, which I have to say was one heck of a good movie. I was surprised that Brad Pitt would be able to pull off a baseball movie that well!

With this very cheap addition to my collection, I now own an autograph of about 17 of the current Yankees rosters' autographs. Rivera and A-Rod will be the most expensive, but I'm making it a goal to at least get one of the 2 this year at some point.