Hey guys, Drew back here. Today we continue the mini series of White Plains card show pickups that I got last Sunday. This time I'm going to show you some of the newer cards I picked up as well as sharing the stories behind them! 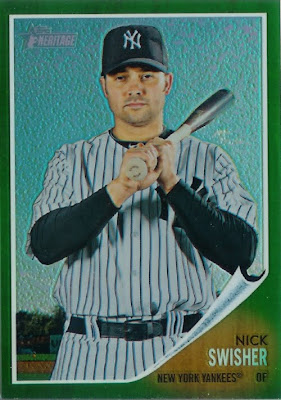 2011 Topps Heritage Nick Swisher Green Refractor SP
This card cost me $5, which I thought at first was very steep for an insert card. However, I looked at some of the listings for this card, and it seems like the price I paid was somewhat fair. This was my only Swisher pickup at this show, but its a really nice card. Sometimes picking up a card without a bat or jersey relic or a scribble turns out nicer. 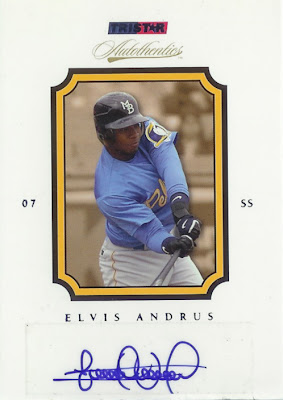 2007 Tristar Autothentics Blue Elvis Andrus Auto /250
I bought this card as well as the next card from the same seller. He seemed like a fairly nice guy, so I wanted to buy a little off of him. Andrus may not be Jeter, but he's turning out to be a great young shortstop. Plus, he has a really cool autograph! From counting, I think there's a good 17 or 18 loops in that entire autograph, and I feel bad for him because signing like that so many times has to hurt after a while! This is a nice card in person, but if it was on card I would like it more, since the sticker auto seems to be dirty on the corners and takes away from the appearance of the card. 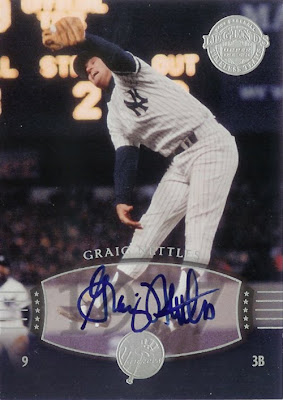 2004 Upper Deck Legends Graig Nettles Autograph
Over the years, I've managed to pick up quite a few Yankees autographs, especially of players from the 1970's era. However, a few always eluded me, and this was one of them. Graig Nettles is one of those Yankees that should have been given more of an opportunity at the Hall of Fame. Had Brooks Robinson, possibly THE best 3rd baseman of all time, not scooped up all the Gold Gloves at the time, Nettles would've won a few Gold Gloves more than the 2 he owns today. He was an All Star, a Yankee captain, a strong power hitter, and a World Series champion, and I'm happy to finally add his auto to my collection, especially on a card that describes him so much. 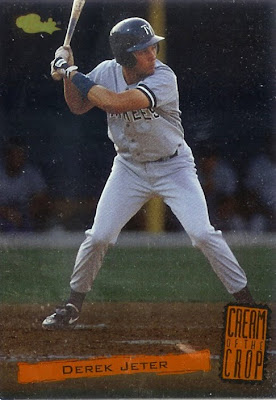 1994 Classic Cream of the Crop Derek Jeter RC
The seller who sold me the previous 2 cards threw this in for free, and while it's not overly valuable and comparable to his top rookies, its a nice card of Derek Jeter before he began to make millions of bucks. The countdown to 3,000 hits begins Thursday, and I never could be more excited for the newest season! 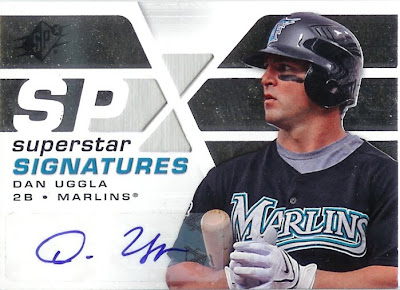 2008 UD SPX Dan Uggla Autograph
Dan Uggla's been one of those players I've grown a lot of appreciation for over the past couple of seasons. I took him on both of my fantasy baseball teams this year, after he hit an incredible year last year for my team. He hits a lot of home runs and drives in a lot of runs, which is rare to find in a second baseman. He might not be as good as Robby Cano, but I think with one more good season Chase Utley will no longer be the 2nd best second baseman in the game. 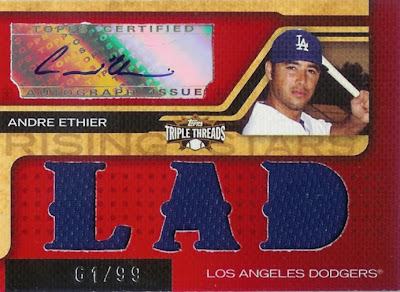 2008 Topps Triple Threads Andre Ethier Triple Relic Auto /99
When this guy is healthy, he sure can hit! He was on my fantasy team last year, and when games counted, he always showed up. If he can limit injuries and stay consistent, he could have an excellent season this year! His autograph sure is atrocious but the card looks nice, and is only numbered to 99. It's been a while since I got a card from this set, so I felt like it was about time to get another. 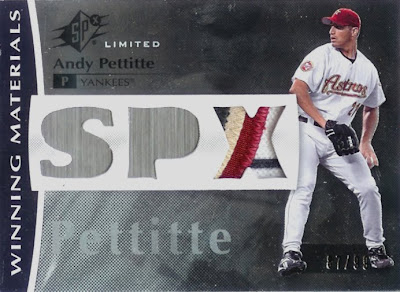 2008 UD SPX Andy Pettitte Patch /99
Mike had a really fun time at the show, especially when it came to patches. He bought 2 patches himself and hopefully I can get a picture of them to show off on here. But, this one I had to claim dibs on, and I'm so happy I did. For a nice price of $8 from my favorite dealer at the entire show, a guy named Hunter, I got this 3 color patch of Andy along with a small jersey piece with a pinstripe! Talk about all in one! Even though he's not shown as a Yankee and the patch is clearly from an Astros uniform, it will safely rest in my Yankees collection! 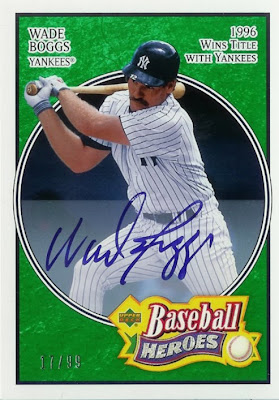 2005 Upper Deck Heroes Wade Boggs Auto /99
My final pickup of the day was a good one. It took me literally an hour of pacing around the show with about $30 on me, trying to decipher what I wanted most. This Wade Boggs autograph was the one I walked home with, and I couldn't be happier. Again, I bought the card from Hunter, my favorite seller of all of the ones I've dealt with, and I couldn't have found a better place to give my money to. Boggs was an outstanding player, maybe more notably for Boston, but he won a World Series with the Yankees in 1996, something the Red Sox could never deliver their All Star. He retired with over 3,000 hits, and was inducted into the Hall of Fame in 2005 along with Cubs second baseman Ryne Sandberg.

What do you think of my/dad's pickups? We've got a little more to come still, so stay tuned for that!