Hey guys, Drew back here. So, I've been very busy lately with practice and getting equipment for the JV team as well as town league, but I didn't forget you guys! In fact, I have a lot of things I want to show you as always! In fact, about a week from right now I'll be coming home with a bag full of cards that I bought earlier that day at the March White Plains Card Show! I'm so excited! I'll have more information about the show as the week goes on, so keep posted. Anyway, got a TTM that I got last week that I waited to show, so is the success: 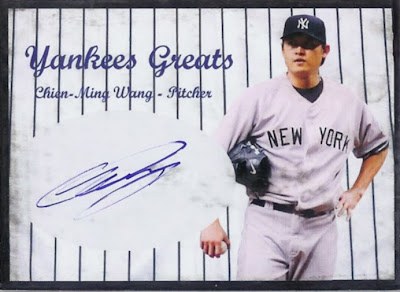 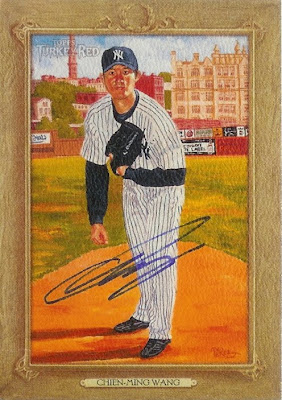 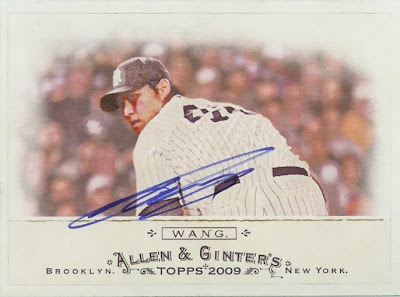 Former Yankees ace Chien-Ming Wang signed not 1, not 2, but 3 cards for my Yankees collection! The first one, a custom, came out a little damaged as always, so I'm a little disappointed, but I'm gonna keep it regardless. The second was a 2007 Turkey Red card, which looks amazing on the front, but the damage from the custom absolutely destroyed the back of the card. Lastly, the final card he signed was from 2009 Allen & Ginter. This card has very little back damage, so it's my favorite of the bunch.

Wang has an awful signature, but he was very hard to get when he was virtually unhittable with the Yankees. He went 38-13 between 2006 and 2007, and was extremely fun to watch. Unfortunately, injuries occurred, and the best way to sum it up now, is that he's struggling to win a pitching spot on the Nationals. Some turnaround huh?

Anyway, he signed the cards in 34 days, and I wanna thank him for doing so! Someone had the guts from Spring Training to sign Drew's Cards! Let's see some more courageous players do the same!