Hey guys, Drew back here, and this pickup today was one of the greatest I may have ever gotten. A few days ago, my dad found a listing on Craigslist that really shocked me. He emailed the dealer and found out that the person selling it actually has worked not in the same area, but in the same building as my dad for many years! Dad bought the baseball without me knowing anything about the reply to the listing, and gave it to me today! 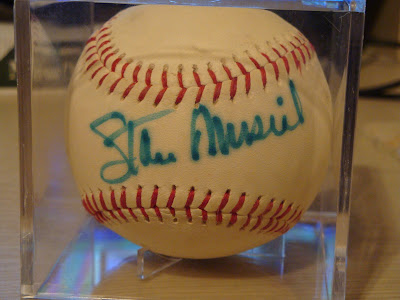 Stan. The. Man. Stan Musial, if you've been reading my blog for the last few months you may know that Musial has been the "white whale" of my collection for a long time. I've tried him twice through the mail, first time getting a postcard, but not even the famous signed one he gives out, an unsigned one. The second time I sent $40 and I got my money back as well as my custom. Thankfully, the wait has finally ended. I own a Stan Musial autograph.

In case you don't know just how good the Cardinals great was, let me explain. 24 Time All Star. 3 Time NL MVP. 3 Time World Series Champion. 3,630 hits, .331 career batting average, 475 home runs, and 1,951 RBI. He was inducted into the Hall of Fame in 1969 on the first ballot, and was also inducted onto the All Century Team! To top it off, he missed a year right in his prime to serve for our country in World War II. He is one of the most beloved baseball players of all time, and maybe the greatest living Hall of Famer out there! 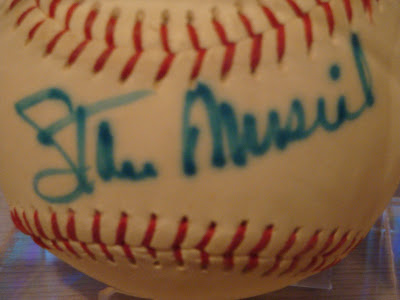 As for the autograph, there's one downfall. It was signed in sharpie. However, the dealer did a great job of preserving the auto because he told my dad that he met Musial and got this ball signed in the 1980's at a card show in Detroit. The dealer recalled that Musial must've been having a bad day and he wanted to just get it over with and get a drink afterwards. That's not the Stan Musial I usually have heard about, but I'm still delighted to own this piece. I'm going to take precautionary methods and get this ball preserved from any future fading, because as of right now, it looks fantastic. Better than any of his more recent autos now that he's 90 years old and supposedly in hospice care.

I'm planning on taking it to the White Plains card show later this March to get it authenticated, and it will 99.9% pass the authentication process. 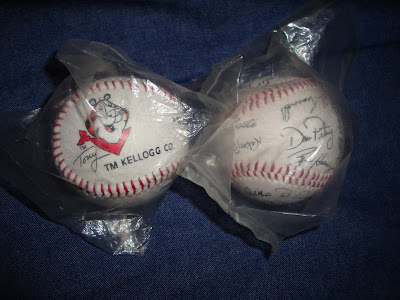 The guy also included 2 more baseballs. The left one is of Tony the Tiger, some Kelloggs baseball that you got when you ate a certain amount of cereal. Pretty unusual I've gotta say. To the right is a stamped baseball of the 1984 World Champion Detroit Tigers, which is pretty cool. I have a few stamped balls, even one of one of the late 70's Yankees teams. I'm still not much of a baseball collector but this Musial auto has been the second ball I've gotten in the last couple months, and while I wasn't there to make the stories, the stories behind the 2 baseballs I've gotten recently are great.

Thanks so much Dad for getting this for me, I really appreciate it!