Hey guys, Drew back here. I've gotten a few TTM's back recently, but haven't been too excited in showing them. Due to some reason in which I have no idea, most of my recent customs are coming back damaged. I've needed to resend to many players due to this, and it's starting to get ridiculous. My dad brought up an idea that the glue I've been using to glue the cards to the card stock might be causing the front to smear, as well as possible roller marks. Well, hopefully I can make an adjustment and they will start coming back mint again like the good old days.

Getting to the successes. All 4 were of good players, so let's check them out! 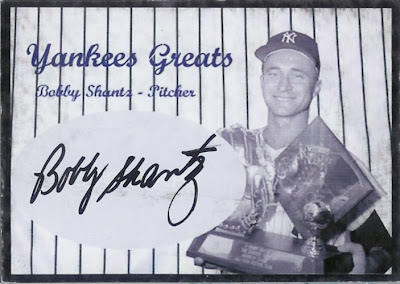 The first success from the past week was from former Yankee Bobby Shantz. Shantz was a great pitcher, and one of the first pitchers to start their career as a starter and end it as a reliever. He did the transition really well and was one of the top relievers in the game during his time in baseball. Not only was he good reliever, but he also won the 1952 AL MVP as a starter, with a record of 24-7 with a 2.48 ERA. He won 8 gold gloves too, due to his prolific fielding at the pitcher position, and also won the 1958 World Series with the Yankees. His career record was 119-99 with a career ERA of 3.38. In my opinion, he should have been considered for the Hall of Fame more, not saying he would get in but at least be a borderline player.

Shantz signed my custom nicely on the autograph section. He only took 5 days too! But as I mentioned earlier, many customs were wrecked in the mail, and this was one of them. It would have looked great too, but unfortunately, I'm going back to the drawing board on these things. 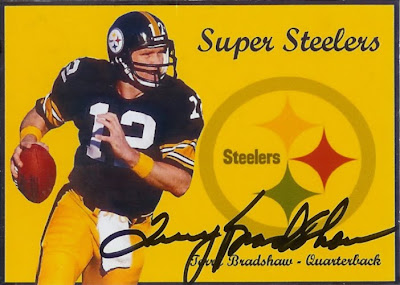 Out of the 4 successes, this was the best. Not only did I pretty much write it off recently, but it wasn't damaged! Pro Football Hall of Famer Terry Bradshaw signed a custom for me! I've been seeing a lot of his successes lately, so he must've been catching up on his mail. Bradshaw was the 1st player picked in the 1970 NFL draft, and the Steelers really made a fantastic pick. He was the face of their franchise for his 14 years in the NFL, and his Steelers team won 4 Super Bowls during his tenure with the team! His statistics weren't ridiculous, but he was a fierce competitor and a winner. He also made it to 3 Pro Bowls throughout the 1980's, and currently serves on Fox NFL Sunday.

Bradshaw took 117 days to sign the card for me. Not too long, but I had a feeling that he was starting to stop signing. Patience is the key to happiness in the TTM collecting hobby though, and I'm really happy I got this one. Stories have been told of a possibility of a ghost signer, but the signature does compare to certified autographs, so I'm going to assume it's real for now. 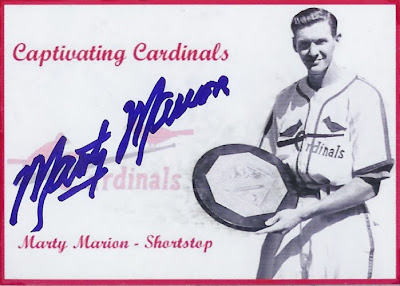 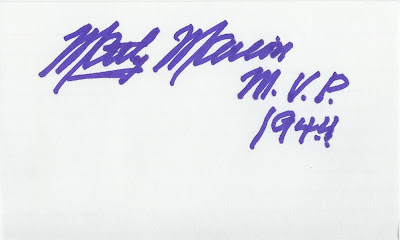 The next success was of former St. Louis Cardinals/Browns shortstop Marty Marion! Marion signed a custom and an index card for me in only 8 days. Marion played 13 seasons in St. Louis along with legends Stan Musial and Red Schoendienst, and was one of the more underrated players on that team at the time. He was the 1944 NL MVP as you see on the inscription on the index card, after posting a .267 batting average, 6 home runs, and 63 RBI. How he won the MVP that year I really don't know, since Stan Musial hit .348 that same season with 12 home runs and 94 RBI. However, he was a very good shortstop throughout his career, being elected to 8 All Star Games, and helping the Cardinals win 3 World Series titles.

Again, the custom has been damaged around the trophy Marion is holding on the custom, but otherwise it came out good. I love his signature! 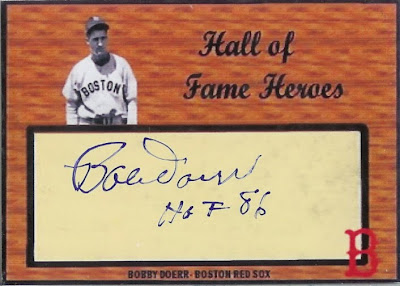 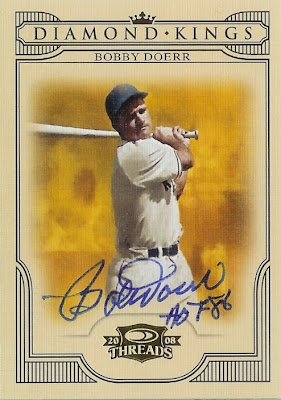 My last success up to now is from Bobby Doerr. Doerr is probably one of the, if not the greatest through the mail signer of all time. I even got his autograph a while back, when I used to make custom cards on filler cards. But since then, I've transitioned to a thick art paper of some sorts, so I thought it would be strange to have a set with 1 card thicker than the rest. OCD Alert. Anyway, Doerr signed a new custom that was damaged a little bit as well, but what else is new, and he also signed an insert from 2008 Donruss Threads in 8 days. I actually picked up the card for the reason of sending it to Mr. Doerr to get it signed, so I'm glad I finally got off my lazy butt and sent it to him. It came out outstanding!

Thanks so much to all 4 of the guys that signed for me! Outside of the damage and having to resend to Mr. Shantz, I'm pretty happy with these successes!