Mail from Around The Blogosphere!

Hey guys, Drew back here. This week's edition of my most recent maildays feature Coot Veal and the Vealtones, a future commodity in Canton, and a guy that could absolutely crush the ball! Let's get started!

First off, I got a package from my new trading buddy Dustin over at the new "Coot Veal and the Vealtones". The blog recently started, and so far, so good! Everyone please do me a favor and go check it out and give him a new subscriber, because he'd really appreciate new readers! Dustin asked if I was interested in a card and it picked up into a solid trade. He sent me a bunch of cards of my "PC" players, so check them out: 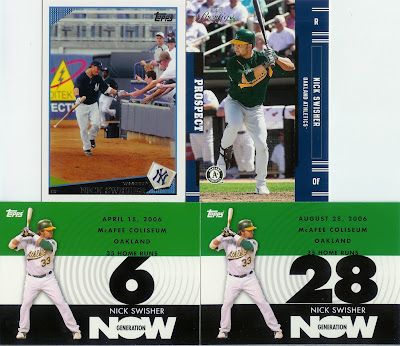 Nick Swisher
Four cards of Swisher arrived in the package, and 3 of them I needed! I really like the rookie card from Playoff Prestige, and I'm glad it was added to my collection. 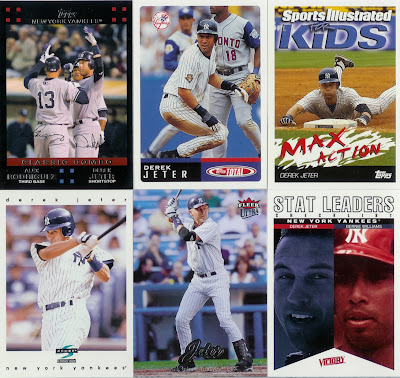 Derek Jeter
I'm almost positive that I needed at least half of these cards, including the Victory Stat Leaders card with Bernie Williams. For some reason I really like that card. 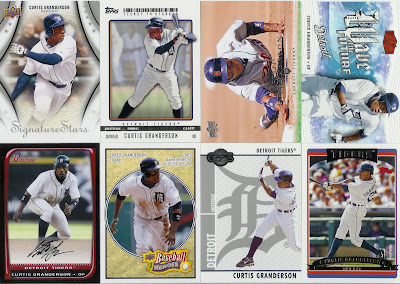 Curtis Granderson
I recently decided to collect Curtis after I received stacks of his cards from Grand Cards. Now, I'm going to try to pick up a ton of his cards, because he's fairly affordable. I think I needed most of these ones here. 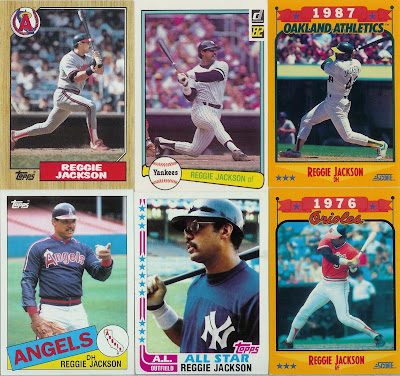 Reggie Jackson
You gotta love Reggie as a Yankees fan especially. Sure, he's cocky, but he enjoyed the game, and was just a real cool guy. Some nice additions to that collection for sure. 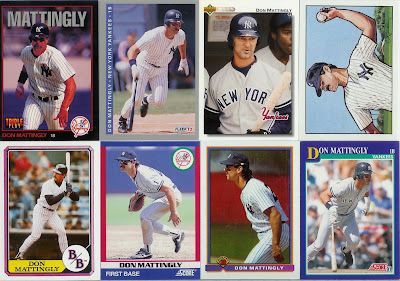 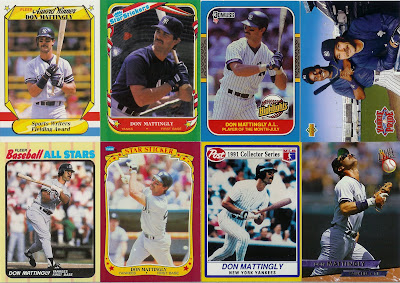 Don Mattingly
I got about 21 Mattingly cards in this package. I'm sure I have some of them, but it's weird to me since I have so many cards of him from his playing days yet new cards I didn't own previously are still being sent to me of his! Always nice to add some cards of a Yankee captain and one of my favorites to my collection. 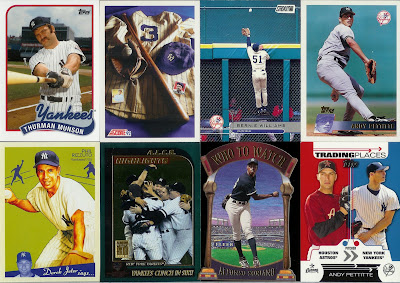 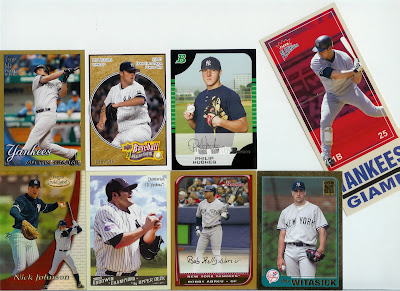 Some mixed Yankees were also included, including a lot of nice cards I didn't have. I've never seen the Giambi ticket like card, it opens up and shows Giambi on the ticket, which is pretty cool. The two Phil Hughes cards in the second scan are sweet too, both very needed for the small Hughes collection. 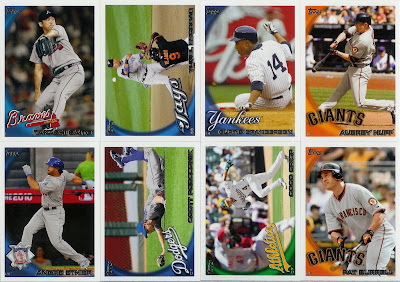 Also he sent 9 cards I needed for the 2010 Topps Updates and Highlights set. I'm still trugging along with that set, thanks a lot Topps for providing me with a nice 200 doubles in my box. I'll remember that one. The final card to show off for now from Dustin was this 2004 Fleer Platinum Jason Giambi relic card. I don't own an awful lot of Giambi cards, and I was always a fan of his in a way. I didn't like that he used steroids but I'm happy he admitted it and moved forward. He was pretty fun to watch back in his day though.

Thanks so much Dustin for all the nice cards! Next up is a package I got for absolutely nothing from a nice guy on the Blowout Cards Forum. I haven't done a whole lot on there lately, so I surfed around one day and found a card I was interested in. I PM'ed the guy, PackAttack419, and he told me that I could have it for $5. After he forgot to ship it out, he told me I could have it for free! Here is the card: It's a 2010 Panini Certified Curtis Martin Mirror Red Immortals relic numbered to only 100! Curtis is one of my favorite Jets players of all time, and he does not have a whole lot in cards to chase. Whenever they put him in a new product, it's a great thing. The more and more I've seen from this product, the more I like it. One day I want to open a box of the stuff! 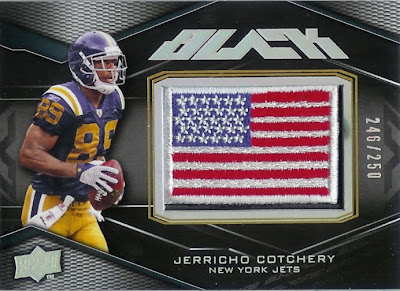 He also threw in this Jerricho Cotchery flag patch base card from 2009 Upper Deck Black, of Jerricho Cotchery. I haven't gotten a single card from this high end product yet, due to the price you pay for a grand total of 4 cards. I don't see the point in opening those products, but sometimes you can hit big I guess. This card is numbered to 250, of one of the more underrated wide receivers in my opinion right now.

Thanks so much to Mr. PackAttack419 if you're reading this, I really appreciated the kind gesture and it means a lot to me! Finally, the last card I have to show for the week was from eBay. I've been wanting an autograph of this guy for a while now, and finally I was able to pull the trigger on one, and I got a great price in the process! 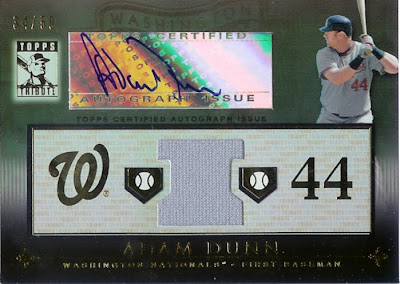 For a little less than $10, I was able to buy this 2010 Topps Tribute Adam Dunn jersey autograph numbered to only 50! If you've been reading this blog long enough, you'd know I have a knack for picking up a lot of cards from this product, because I really like the design. For the pack price, no thank you, but when you can get a card like this for under $10, it's a great deal.

I think that Dunn is one of the most underrated players in baseball right now. Probably the reason for this is that he hasn't played for any contenders yet and hasn't gotten a chance to prove himself in October. He's only made 1 All Star team way back in 2002, but that's mainly because he only has 1 of the five tools, and that is power. And boy does he have that! He's only 31 years old right now, and he has hit 354 home runs! I bet he'll hit 500 at some point in his career, if he continues the consistent 40 home runs seasons. When I think of Adam Dunn, I think of Jim Thome. They seem to go hand in hand to me. Now he's on the White Sox, so we'll see how heading to the American League will do for him.

Thanks again to everyone that made this post possible, and See Ya!
Posted by Drew at 9:35 PM