Revealing the Mysterious Binder... A Little at a Time... Sandy Koufax & The LA Dodgers Edition 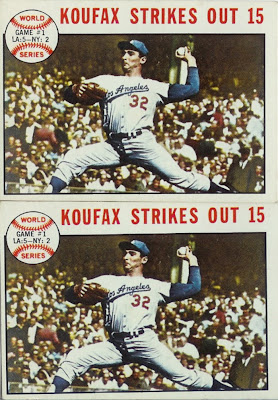 First, we have two cards from the 1964 set, from the 1963 World Series Highlights subset! They show Koufax and his famous powerful windup, with the headline above proclaiming his 15 strikeouts in Game 1 of that series against the Yankees. This is an unfortunate card for Yankees fans, because following this game they managed to get swept by the Dodgers. Oh well, you can't win them all, and it's always nice to see different teams win outside of the Red Sox. 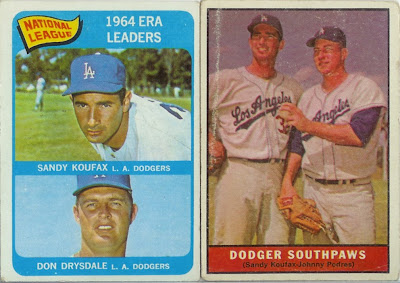 These final two cards of Sandy Koufax feature some of his great pitching teammates, Don Drysdale and Johnny Padres. The card to the left is a 1965 Topps NL ERA leaders, and I find the card to be really cool. Two teammates on the same leader card really shows the dominance of their pitching staff at the time. Koufax won the Cy Young award in 1965 after going 26-8 with a 2.04 ERA and 382 strikeouts. Nobody can even come close to those numbers nowadays, because they are completely unheard of! On the right card, Koufax and former pitching great Johnny Padres are displayed as "Dodger Southpaws". This card is really knicked up, but I still really like it, because anything with Sandy on it is a great one.

Sandy Koufax won only 165 games in his career, mainly due to the fact that he only played 12 seasons because of an arthritis condition that ended his career. His career ERA is 2.76, and he struck out 2396 batters. He made 7 All Star teams, won 3 Cy Youngs, 4 World Series championships, and 3 pitching Triple Crowns. Wow. Had he pitched longer, you can make more of a case that he is the greatest pitcher to ever take the mound.

These cards from this binder so far have been unreal. You could only imagine the look on my face when I uncovered this from the ruins of 1989 Topps and 1990 Donruss! Thanks so much again to the nice lady who gave me the cards! And for the rest of you, stay tuned for the next installment of the series!