Hey guys, Drew back here. From this point forward, I don't think we'll have to deal with as much damage on customs over here at drewscards! I picked up a new kind of glue, a liquidy kind as opposed to the glue sticks I was using. Keep in mind, that glue sticks are the worst idea ever for gluing customs to the card stock. Don't do it. Anyway, after I received a damaged custom from this guy, I decided to try him once more, and hope for the best. 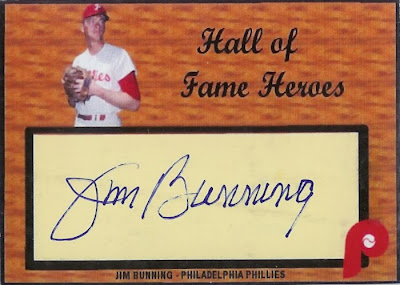 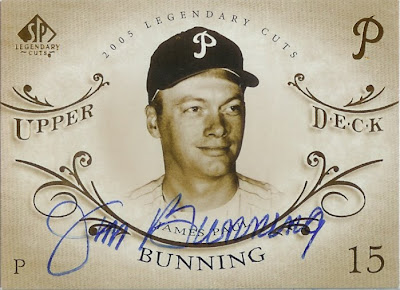 I got Hall of Fame pitcher Jim Bunning to sign not only my custom, but also sign a 2005 Upper Deck Legendary Cuts card! First off, I got the bottom card as part of the 2005 Legendary Cuts set, way back when I went to Cooperstown a few years ago. Since I got the set it's basically been sitting around in my special Hall of Fame box, until I found it and decided to try it TTM. The autograph looks incredible on the bonus and I'm very happy to own another auto of Bunning's. As for the custom, while it's not in mint condition damage wise, it's not in bad shape at all, and I can definitely live with this one! I sent this out prior to getting the new glue, so I hoped and prayed it wouldn't come back damaged. It would've had it stayed attached to its card stock, but fortunately I opened the SASE to find the stock completely seperated from the card itself. This success came back about a week ago, and it took about 15 days to come back.

Bunning had a very successful career. While he's not a top tier Hall of Fame, he still deserves his plaque in the Hall of Fame. He mainly pitched for the Tigers and Phillies but also played 2 seasons with the Pirates and Dodgers. Winning 224 games with a ERA of 3.27, as well as 2,855 strikeouts (the second highest in MLB history at the time of his retirement, behind only Walter Johnson), he was one of the top pitchers of his time. Not to mention he also threw a perfect game on June 21st, 1964 against the Mets, one of only 20 pitchers to ever accomplish the difficult feat.

Along with his baseball career, he was the senator of Kentucky from 1999 to 2011, when he just recently announced his retirement. Since then, he's been a great through the mail signer. If you like your Hall of Famer autographs like I do, then I highly recommend you send a card or two out to him! You'll definitely be satisfied!

A big thanks goes out to Mr. Bunning for signing for me again after the last card came home wrecked! What do you think of the cards?