Hey everyone, Drew back here! Today, as I mentioned in my previous post, I went to the White Plains card show. Mike, Joemama, and I made the trip to the Westchester County Center, to meet some players, spend some money, and have a great time. We did all 3. Well, the day had its ups and downs, but majority were certainly ups. Over the next week or so, I'm going to highlight to you some of the things I got at the show. I'll start small with pack breaks, and end big with the players I got the opportunity to meet! For now, between Dad and I's pickups, here are some of the packs we bought: 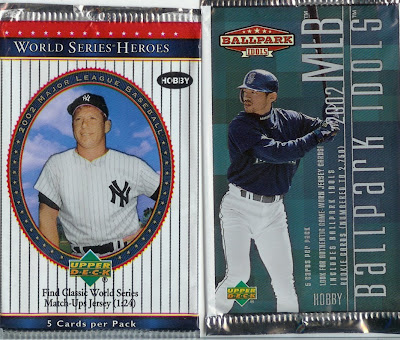 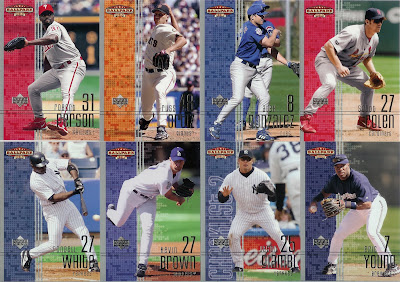 The cards not shown in the scan are Kevin Appier and Brandon Duckworth. Overall I've never seen this set, pretty much since it was mixed in with the thousands of random releases Upper Deck made around this time. For $1 each you really can't go wrong but there really was nothing exciting in these. Again, not shown are Jose Rijo and Matt Williams. Click on the scan if you're curious to see a closer up shot of the cards. Anyway, from the 2002 World Series set, here are 8 fantastic cards of some great players. I've always liked this set, but never got much of it. Rickey Henderson and David Wells' cards are my favorite of the ones I pulled though. 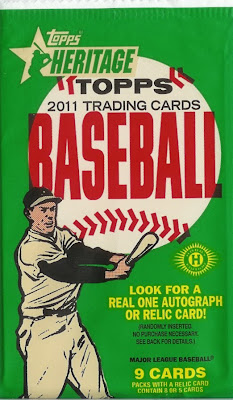 After those 4 packs, I also bought myself 3 packs of the all new 2011 Topps Heritage baseball series. I've seen too much of this stuff already and I'm really liking the way Topps went about the set this year. One thing I've noticed is that the disgusting gum you normally get in these packs are resting in peace for the year which is an improvement, especially when they added one more card per each pack as a replacement. 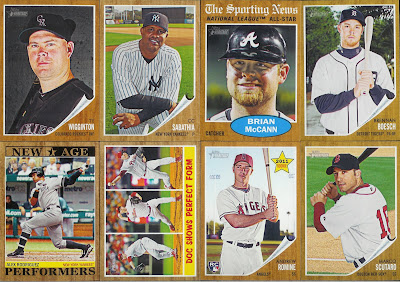 Pack 1 was a great pack in my opinion. The 1 card not shown was of David Aardsma, but none of you guys care about him so I figured you didn't have to see his bald head. While I like the CC Sabathia and Brian McCann cards, my favorites of the pack are the A-Rod New Age Performers card and the Halladay Perfect game highlight card. I really think Topps hit a home run with the way they did the inserts this year, because they look great. 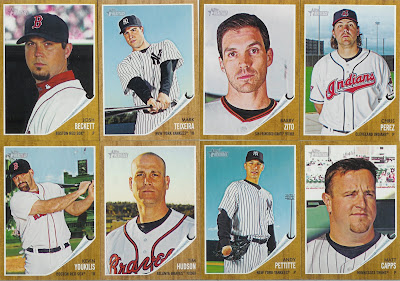 Pack 2 didn't have the insert flair of Pack 1, but I'm still happy because I got 2 more Yankees for the collection, in Andy Pettitte and Mark Teixeira. I also like Chris Perez now since he spent some of his contract money to buy the cut autograph booklet card of the 1927 Yankees team recently found in 2010 Topps Tribute. 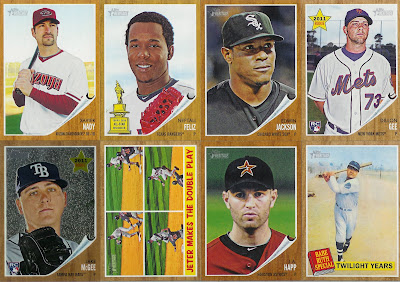 The final pack contained some more very nice cards. It was thicker because I ended up pulling a Jake McGee chrome rookie card numbered to 1962, which I liked a lot. Also got a Jeter insert as well as one of those cool Babe Ruth special cards. The card highlights his time spent with the Dodgers as a coach before his retirement. Ruth apparently always wanted to manage a team, but he never got the opportunity in his life.

The final part of this post, is about some mystery packs I bought from one seller. He was selling $3 packs, each containing one auto or game used card and some other cards alongside the hit. I bought 1, and dad bought 5 of them, for $10. Let me tell you, we could have done a lot better, and I'm not going to bother show anything but the 6 relics we ended up pulling. 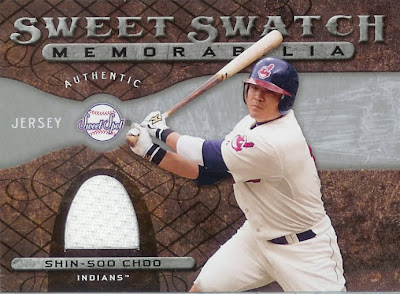 First off was this Shin-Soo Choo jersey relic from 2009 Upper Deck Sweet Spot. In my opinion, he could be the most underrated player in baseball, since hardly anyone knows how good he actually is. Last year, he batted .300 with 22 home runs and 90 RBI. Shin-Soo WHO? 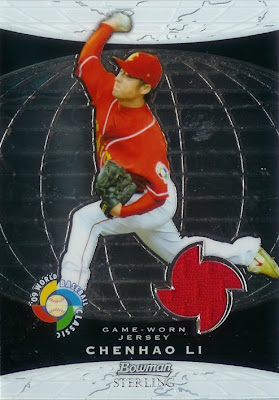 This guy pitched for China in the World Baseball Classic. And theres a piece of his jersey. Wooo. 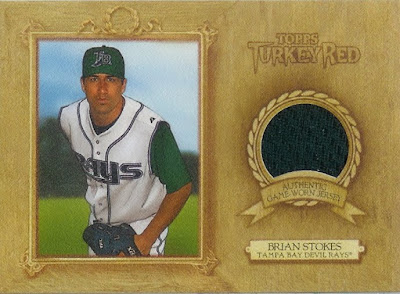 Next was a Brian Stokes relic. He was a Met after his stint with the Rays, and then became a free agent. I hope that explains the jist of how good he is. 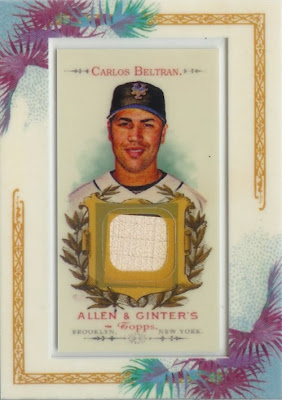 Now we have Carlos Beltran. He was good, but now he's old and the Mets really shouldn't be relying on him this year to play in their lineup. We'll see though. By the way, I love Allen & Ginter, in case you didn't know! 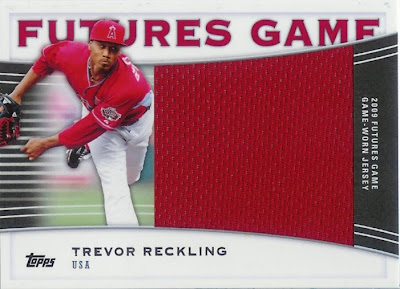 From 2010 Topps Pro Debut, here's a Trevor Reckling jersey card. This has to be the largest swatch I've ever gotten in my collection, and it's numbered to 139. He's a pitcher in the Angels organization, and I don't know much else about him. Still a cool card though. 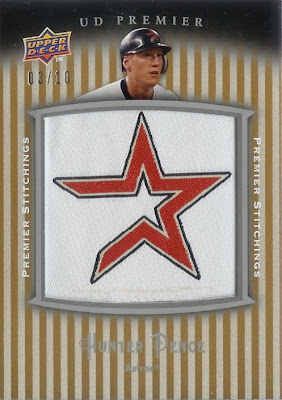 The final card was my 1 hit in my bag, a Hunter Pence manufactured patch numbered to only 10! The guy is convinced that the thing is a real jersey, but anyone that knows anything about Upper Deck Premier knows that this thing is fake. It's a really nice card though, my first from the set.

Well, that'll just about do it for the first post in the series! Stay tuned for the second part, coming soon to drewscards!