Revealing the Mysterious Binder... A Little at a Time... Yogi Edition!

Hey guys, Drew back here. As I promised, you guys will get an occasional glance into the binder of brilliance, which is by far now the greatest piece of my entire collection! It may take months, years, or even millenniums to get this binder done and showed off, but I want to tribute all of the fantastic players that took part in building the holy grail of my collection. First, we showed Stan the Man, and now, it's on to one of my all time favorite players, Yogi Berra! 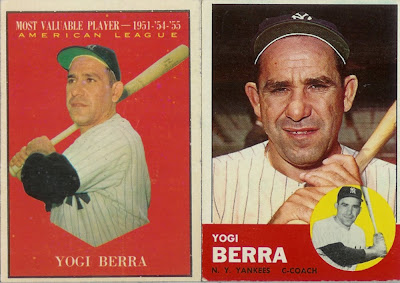 The binder contained 2 cards of Yogi from his playing days, becoming the 1st 2 vintage cards I ever owned of his. The first card is from 1961 Topps, an SP for that matter, that dedicates his MVP awards in 1951, 1954, and 1955, and on the back it mentions that he held the record for most home runs by a catcher. He since has been surpassed by Johnny Bench, Carlton Fisk, and Mike Piazza in that category. It also states that he is a great clutch hitter. In his 14 World Series he's played in, he hit 12 home runs, including 3 in the 1956 Fall Classic.

The second card is card number 340 in the 1963 Topps set, a set that I don't a whole lot of. 1963 was Yogi's final season as a Yankee. He was 38 years old that year, and only played in 64 games, but I think the card does a great job in honoring one of arguably the greatest catcher to ever step behind the plate. It also says that he was a coach that year, and he took over as Yankees manager the next season. In 1964, he led the Yankees all the way to the 7th game of the World Series until the Cardinals beat them in the final game, which led to Yogi's firing.

Yogi is by far the most revered Yankee alive to this day, and god bless him. Eighty five years old, falling on his butt, but still managing to get by.