Hey guys, Drew back here. Before I get into this post, I just wanted to once again thank all of the great guys out there who congratulated me based on my last post, and if you haven't read that yet, please do. Also, for all of you I'm currently trading with, sorry about the delays, I'm going to try to get everything ready and out as soon as I can. Tryouts did get in the way for a while, so hopefully it's ok that I'm taking a little long with this. Anyway, I've gotten a few more successes recently, but I'm going to spread them out a little. Here are the next two successes, numbers 52 and 53 for me! 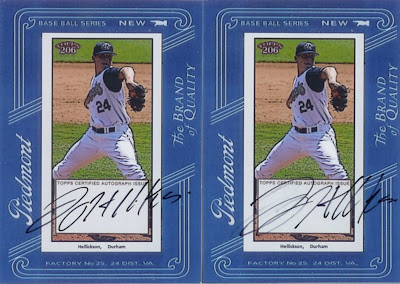 First, Rays rookie pitcher Jeremy Hellickson signed 2 customs for me! I have sent to this guy twice now, the first being these two cards back in last August, and then again in Spring Training this year. The customs were made for me by Mike over at Bad Wax, who offered me a small trade for me to use the cards for. Thanks again Mike for letting me use them! The cards use the design of the framed autographs from 2009 Topps 206, and he made many big name prospects.

Hellickson is one of those guys that I plan on following throughout his entire career. I very well may have seen him pitch in 2006 when he was on the single A Hudson Valley Renegades team, my local favorite minor league team. I wouldn't know because I never wrote down when I went, because I was a young kid at the time. However, when I got into some of the prospects, this guys name came up, and I recognized it. I looked him up and saw that in 2006 he pitched in 15 games for the Renegades, with a record of 4-3 and an ERA of 2.43! When he made his Major League debut on August 2nd of last year, I was a fan! Until the end of the season, while being called up and down often, Hellickson pitched in 4 games, and won 4 games. He was dominant, and many people think this will carry over into this year, when he has a chance to win Rookie of the Year as a starting pitcher for the Rays.

Hellickson took 196 days to return this one, and I had to say I was very surprised and pleased that it came back! Also, it ended my streak of damaged customs, which was very good to take a break from. If any of you are looking to trade anything you have of him I'd be really happy to take them off your hands! 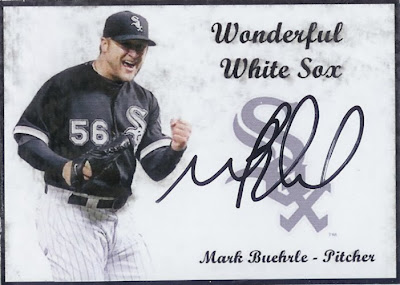 Well, it could've been a lot better, but Mark Buehrle signed a custom for me in 29 days c/o Spring Training! The card was one of the most damaged customs I've gotten back yet, so I'm really disappointed with this return. I'm crossing my fingers that more of the customs don't come back this damaged, because the glue I used is just completely destroying the cards. I'm going to try a new glue soon, so hopefully the situation will be solved soon. One idea I've had with this is that I could attempt to cut the auto out and make a cut autograph, but I'm not sure if that would be a good idea or not. He's very hard to get to sign cards, because he tends to sign more of the larger items with TTM's. I also sent to him back in July last year and I'm still waiting on that.

Buehrle has had an impressive career, and I'm not sure how many people have noticed it. Going into his 12th year in the big leagues, he's sported a 148-110 Win-Loss record with a 3.85 ERA. He's made 4 All Star Teams, won 2 Gold Gloves, and won the World Series in 2005! He also pitched a no-hitter in 2007 and a perfect game in 2009. Plus, he owns the MLB record for most consecutive batters retired, with 45. He's been one of the most consistent and underrated pitchers in baseball in the last decade, so I'm glad to own his auto, even if it's destroyed.

Does anybody know a good way to get rid of all the damage on the cards? See Ya!
Posted by Drew at 12:41 PM