Outstanding Gift from a Craigslist Dealer!

Hey guys, Drew back here. Dad has been on an awesome roll lately with Craigslist, and this is just the next installment of what we've found now. A month or so ago I posted some of the highlights from a large box of cards given to me by my dad. A little while later, that same seller decided to ask my dad if I would be interested in more of her now deceased father's collection! Dad was shocked from the offer and told me about it, and I was really excited! He came home just a few days ago with an enormous tub full of binders and various bits and pieces from the man's collection. It's going to be so hard to put all of it in one post, so for your sake I'll just post a few of the pictures from the binders: 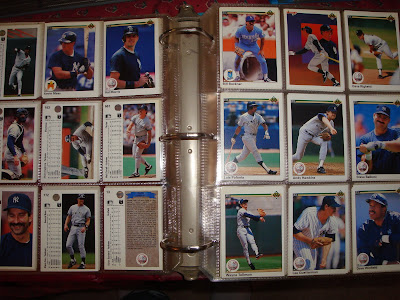 One of the binders contained most of if not all of the 1990 Upper Deck set. Early Upper Deck was very nice, and some of the top rookies from this set are Tino Martinez, Juan Gonzalez, Sammy Sosa, Deion Sanders, and Robin Ventura. I wish the binder could've been 1989 Upper Deck so I would have a chance at landing my 2nd Griffey Jr. rookie from the historical set, but hey, you can't be mad when you got the cards as almost a gift! 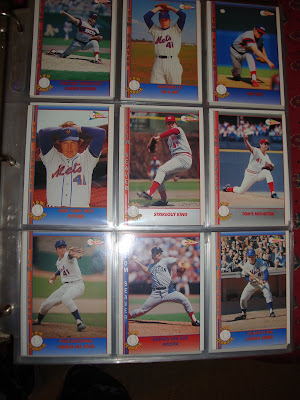 The next binder contained a variety of some sorts. It started with some 1992 McDonalds cards, the best being a rookie card of Jeff Bagwell. Next were some 1992 Pinnacle, followed by the shown Pacific card set of Tom Seaver. 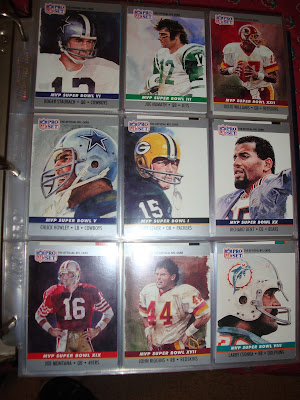 After some 1991 Upper Deck, I found these sweet painting cards from 1990 Pro Set football! Boy do I love that Namath card! 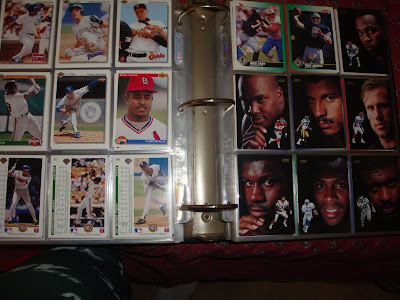 I never saw these 1991 Score football cards on the right side of the binder, and I was pretty impressed. They certainly looked pretty cool! The binder ended with more various baseball cards from that time, my favorite being a 1989 Topps Griffey rookie card. I could never have enough of those! 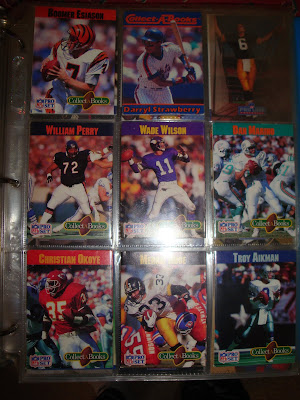 In the following binder, we discovered a lot more football, including the Collect a Books above. However, my favorite card on the page is definitely the Daryl Strawberry book card, the lone baseball player on the page. 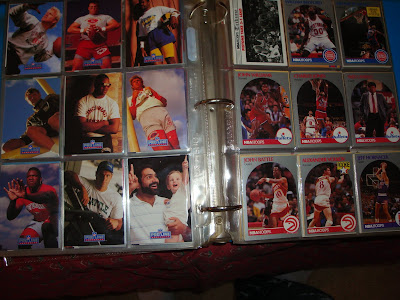 After the flip book cards came a ton of the stylish and mind blowing 1991 Pro Line portraits cards. Those cards definitely describe how awful the fashion statement was back in the early 90's, with basic sweatshirts, sweet shades, short shorts, jump suits, and zebra pants. Some basketball cards followed, as well as some more baseball as always. 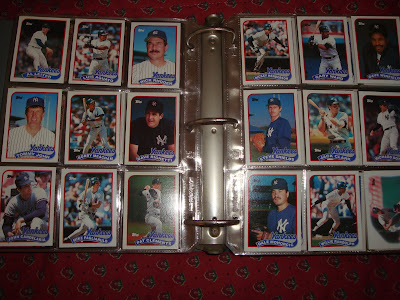 Binder #4 had pretty much the entire 1989 Topps set, featuring the best of the junk wax era, with rookies of Gary Sheffield, Randy Johnson, Ken Griffey Jr., John Smoltz, Craig Biggio, Jim Abbott, and of course, the big bust, Gregg Jeffries. I'm not sure if I own this set but I probably do. 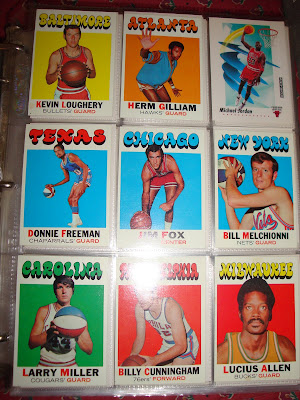 The next binder contained mostly all 1990's basketball cards, but among the Michael Jordan's and Larry Birds were these 8 1971-1972 Topps basketball cards. None of the players were incredible from my understanding with the exception of Billy Cunningham, but they are by far the oldest basketball cards I own so that's pretty cool. 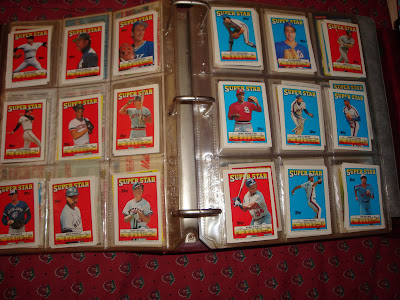 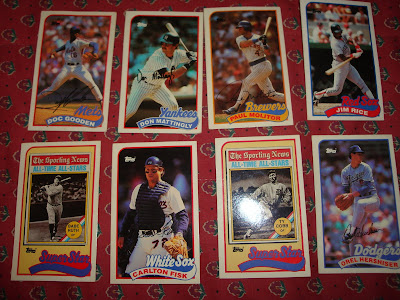 Also assorted below the binders at the bottom of the tub were these 1989 Topps big cards. I'ved never seen them before but they're pretty nice I have to say. The problem as always with these, though, is the challenge of finding ways to store them. 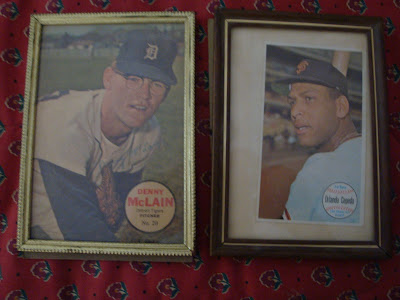 Along with the big 1989 cards, we found 2 framed cards hiding below it all in the box. One was an Orlando Cepeda card from some time in the 1960's, and also a huge Denny McLain card. McLain of course as you know had an enormous year in 1968, becoming the last pitcher in MLB History to win more than 3o games in a single season! 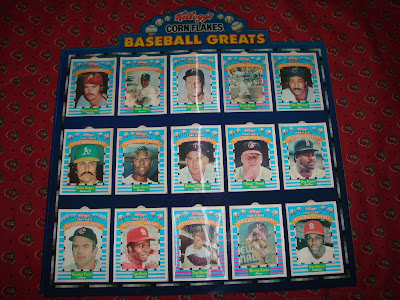 Laying on top of the tub was this Kelloggs Corn Flakes Baseball Greats poster thing, featuring cards from their Baseball Greats sets. This is a really cool piece and has some very impressive names on it! 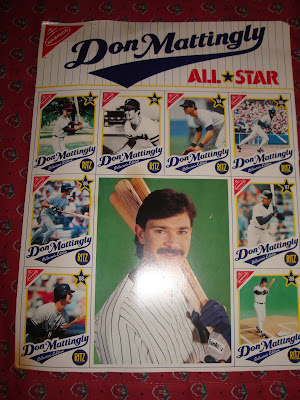 Next was a Nabisco 1989 poster of Don Mattingly! I'm pretty sure the photos surrounding the close up shot of the Hitman are cards, but I'm not cutting them out. I think the poster looks great as is, and i want to hang it up sometime. 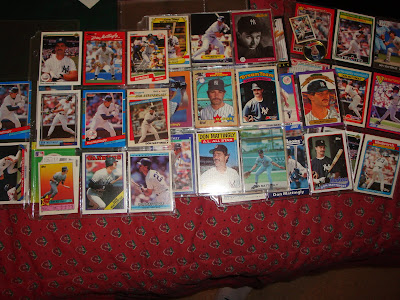 There was also a mini binder filled up with page after page of Don Mattingly cards. As you may know I collect him so it was really cool to have a bunch of his cards show up in the tub. One of these days I'll put together a list of what I have of Mattingly so that you guys can help me achieve my future goal of getting most of his older cards as well as a lot of his newer cards as well. 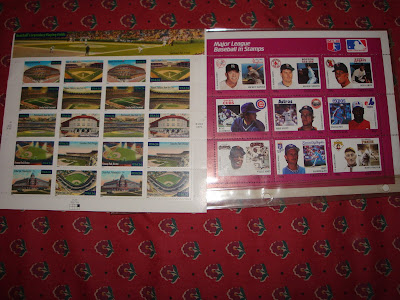 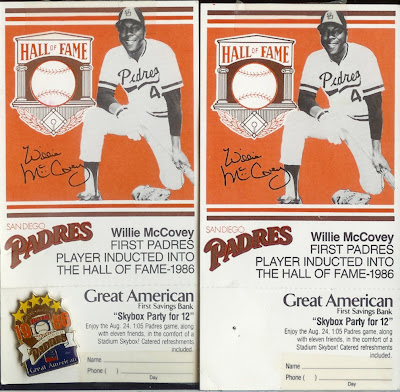 There were also some very assorted stuff. Ticket stubs from old Mets games, pins, and stamps were the coolest in my opinion of the various non-card items found. I don't know a lot about vintage stamps but I must say they're pretty cool to own. The pin commemorates Willie McCovey's induction into the Hall of Fame, becoming the first Padre to make it in. Real cool.

But that was just the beginning of amazing things to come! You'll see in an upcoming post!

Unfortunately, I might not have much time this week to post, because after school each day there will be JV/Varsity school tryouts. As you may know I've gotten cut from school ball 2 straight years and I really deserved to make it each year, and the same coach from those teams is moving up to coach JV. I'm going to have to prove myself and play to the best of my ability in order to make this team, and I feel like I can definitely make it if I play my heart out. Wish me luck everyone!