We Now Interrupt Your Regular Hobby Card Talk... With a Story

Today, billions of people flick on the TV, and sit in front of a "Fox 5" or "CBS 2" News show. The typical suspects seen on the screen nowadays are fire, the tragic earthquake/tsunami in Japan, an attempt at changing our world, and Charlie Sheen. It's a rarity when you actually find something, you know, not depressing on today's news. But it's the sad truth. Millions of people are unemployed, disease takes away thousands of lives regularly, natural disasters often occur, and people hurt other people just because they think they're superior to them.

Well, I want to tell you and share to you that there's always a dream to chase, no matter how poor, destroyed, or corrupted our world is. Maybe this situation doesn't compare to the severity of the examples I previously mentioned, but it's much nicer to read about then a man charged with murder or the future possibilities of nuclear bombings.

About a year ago now, I came home from school in tears. I tell myself that I'm a tough guy, and I feel weird when I do cry, but this was so natural to me. Ever since I was about 8 years old, I started to follow and play baseball. It became my life. Just take a look at my room, and if you find something that isn't furniture that is not sports related, it would be a major surprise. After I began my baseball career in 3rd grade, after I moved to a new school, I was caught on for life. I played in that same town league for 3 years, until it folded when more and more kids decided leaving America's Pastime for Lacrosse was a great idea. I joined another league and learned more about the game then I ever had. I wasn't the best player, but I was up there at least.

When I was in 7th grade, I decided to try out for my school modified baseball team in the spring. The coach was a young guy who taught at another school and apparently had quite a bit of knowledge of baseball. I played my heart out as I always try to do, but it wasn't enough. I didn't get past 1st cuts. I joined the same town league I was in the past year, and had a very good season. My team even finished in 2nd and I made a lot of new friends! But with school, I quickly developed a bit of a grudge on the coach. I felt like I didn't deserve to get cut, and while I don't try to be cocky, I always am confident in my ability.

So, as I was saying, about a year ago I came home more upset than I may have ever been in my life. I called mom and dad earlier that day, so when I got home, mom was right there for me, as well as dad when he got home from work. I had just been cut, by the same coach, for the 2nd year in a row. You may remember my angry rant post that had been removed shortly after I posted it, but I followed up with a more mellow post concerning the fact that I had been cut again. It was a complete shock to me and my friends that I was cut, and my dad emailed the coach asking what I did wrong. He said I wasn't hitting and fielding well enough and provided one or two suggestions to improve the next year. A huge grudge began to form on the coach, and I did not want to even look at the players on the team that year. It was a complete let down, and killed my confidence.

As I did the past 2 years, I joined my town league again and improved even more. I read through all of your comments and suggestions as to how to improve and worked extremely hard that season. Our team did really well again and I had a fun year even without making the school team.

Going into 2011, I decided that it was right for me to give it another shot. This year however, I added a new weapon to my arsenal, and decided to pitch. I had last pitched in 6th grade, so I'm pretty unexperienced to say the least, but I threw hard and when I focused I had great control. I figured it would give me more of a chance to make the team, and I was going to do anything I could to make it. However, the JV coach had left for another school, so the coaching slot was open. Four coaches were interviewed in late February, and the job went to, of course, the same coach who had cut me in the past 2 years. My confidence started to completely shatter, but I kept my composure and tried to be as positive as I could be about the team. I attended all of the pitcher/catcher open gym events the school had, and tryouts suddenly appeared right in front of my eyes.

I gave the tryouts a different approach this year, by basically removing the coach from my head and just playing the game I know and love. I threw well on the mound and in the infield, batted well enough, and ran like my pants were on fire. That's where running on the track team came into play! The coach came up to me during one of the open gyms, patted me on the back, and told me he was glad I returned to try again. After that day of tryouts, he came up to me again and said I did exactly what he said I needed to improve on, and he was really impressed with my play. My confidence rose to new heights, and I went through the next days having a great time playing baseball!

But today, was the big day. Yesterday, coach explained that cuts may not appear, but a good 4 or 5 players would have to be on a practice squad. Before he said that, I was confident because only a complete jerk would praise you like that and then cut you after, and I wanted to think that he wasn't a jerk. No matter what I thought, all of those thoughts didn't matter. The only thing that mattered was the slip of paper in front of the athletic director's office that told me how my future would play out.

My entire morning was in slow motion today, and it was awful hard to pay attention in class. Of course I ended up with a test just minutes before the slip was revealed, so that was extremely hard to focus on, but I got through it. I went to my next class, and right after that, on my way to the list before I got to lunch, my friend Mike ran up behind me and said to me and my friend Schuyler, "Guess who's not on the practice squad? All 3 of us!" He brought me over to prove it, and I was shocked. Finally, after years of waiting, it was my time to show that coach that all along I deserved to be on those teams, and to bring my school as far as I can personally bring it! It was a sigh of relief and a time to celebrate in my mind, except for the fact that I still had more classes after lunch. I went to practice tonight, and officially became a member of the team!

My message to all of you, young or old, athletic or not, whoever you could be, is to never, ever, give up! In middle/high school, it's so difficult to keep going with something after you fail to meet the expectations. You overhear people saying you suck at things, and you become the center of all jokes. But if you love what you're doing the way I love baseball, you can't let any of that affect you. Anyone has a chance at anything at any given time, but you need to work towards it to get to your goal! You just need to fight on, and if you do that I guarantee to you that a moment like this will happen to you. And if you don't think it's worth it, trust me, it is. I've never been happier in my life! Proof? 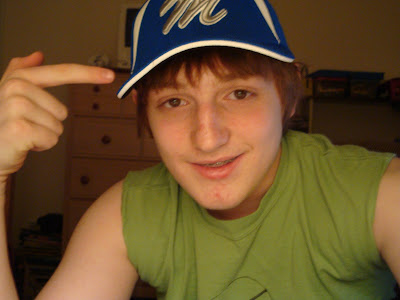 Excuse me for my pajama shirt, it's pretty late, and I need to get some good sleep so I can be all ready to go at practice tomorrow night!

Before I end this post, I want to thank all of my friends and family for helping me through the struggles I faced in the past with baseball. I could not have had the confidence to continue my dreams without you! That goes for all of you bloggers too out there! You aren't just friends, your like a second family to me, and with all the advice you've given me, I can't leave without even touching on how much of an impact you've all made on my life. Thank you so much everyone!

And to everyone that has trouble making a team or event, KEEP YOUR HEAD UP!

Labels: Advice, drewscards, Finally, I MADE IT, Storytime, Tryouts