Revealing the Mysterious Binder... A Little at a Time... Stan the Man Edition Hey guys, Drew back here! Remember that binder? Yeah, a few posts ago I showed off some of the highlights of an enormous tub full of cards given to me by a very nice lady whose father recently passed away. Well, there was 1 binder in the tub that stood above it all. It was so impressive that we actually have to start a new series to show off all of the good stuff and give them the respect they deserve! Let's kick off this series with these 2 cards: 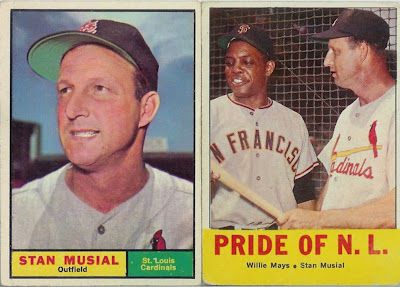 Today we dedicate the 1st post of the series to Cardinals legend Stan Musial, as well as an appearance by Giants great Willie Mays! On the left is an actual 1961 Topps Stan Musial card, and on the right is a 1963 Topps "Pride of N.L." Willie Mays and Stan Musial card. Without actually explaining the book value of these cards, let's just let stats do the talking as always.

Stan Musial, as I recently explained when I was able to pick up an autographed baseball of his a week or so ago, was a heck of a player. The guy was voted into 24 All Star Games! You might not think of him along the lines of Ruth, Gehrig, Mays, and Aaron, but honestly, you should. With his amount of All Star appearances, he is tied with Willie Mays and Hank Aaron for the most All Star appearances EVER. Granted, for about a four year stretch in the late 1950's-early 1960's, 2 All Star games were played a year, and all 3 of them did get some bonus appearances due to that. But that is a very special number in my mind.

He also not only won 1, not even 2, but 3 National League MVP's! To top it off, he even missed a year in the service. It truly shows how legendary of a player he was when you see him with another American Icon Willie Mays on the same card. Those two men hit 1,135 home runs between them. Oh yeah, these cards are THAT good. And the condition you ask? A little wear but they look amazing!

Trust me, there's more of what that came from! Stay tuned for the next installment, so you can see what other treats we found in this binder!