Hey guys, Drew back here, after taking a trip to a local mall today, I found some packs at a sports store and got a nice card! I'm giving you a little more time on yesterday's question, you gotta still get the last player!

So I found a binder full of some random inserts and such, most from one of my sets I need to complete, 2008 UD Goudey. I found 5 cards, and I didn't notice I already had one (the Tony Perez card, FT) but the other 4 I needed for the set (30- Youk, 32-Billy Williams, 145- Ashburn, 162- Cepeda). So they are crossed off now. If you want to see what I need from that set, check out this link.

I am a stupid kid at times. I have not had any luck with this next set all year, except earlier when I pulled a nice Victor Martinez patch (Red Sox-Jo!). Today I bought 2 packs of the aftermath of one of my favorite sets, A Piece of History, here's the recap:

Pack 2 (non hit pack, I bought it after I pulled the nice card, this isn't as sweet)
-Brandon Webb (the 1st card in the set)
-Carlos Zambrano (a fat dude that likes to knock over water coolers)
-Hanley Ramirez/Dan Uggla/Hermida Franchise Members 3 Blue #ed/999 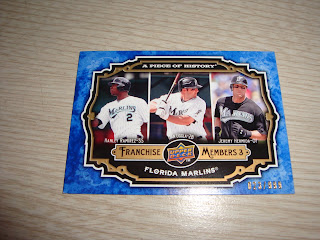 -20th Anniversary Kentucky beats Syracuse (I have so many stinkin Kentucky Wildcats 20th anniversary cards!)
-Josh Geer RC (He looks 40 already)
-Historical Moment Elevator Invented (I wish I had an elevator in my house, I'd go up and down all day!)
-Luis Cruz RC (scrub)

The Good Pack
-Jake Peavy (Why is he in the American league?)
-Alex Rodriguez (NICE, I need it. You don't)
-Ian Kinsler (NICE, you need it. I don't)
-Historical Moments Discovery of New York (A pizza guy named Giovanni found it)
-Travis Snider RC (Slowly and steadily I end up with one of all his cards!)
-Historical Moments Pearl Harbor (Yawn, I feel like I'm in Social Studies)

And the big mojo hit of the day: 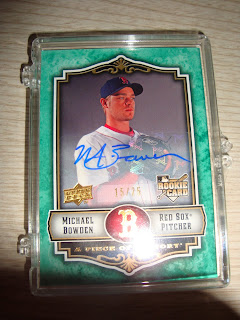 
Yeah more Red Sox-Jo! I could always use a card of the next Yankee killer! Seriously though this is a pretty nice pull, very low numbered, and it books from $25-30 bucks (I'm assuming). Thanks for reading, and vote on that poll! See Ya!
Posted by Drew at 4:00 PM