Hey guys, Drew back here with the first installment of the my new series, the Baseball Card Hall of Fame (BCHOF). In this segment I will select a fan friendlly famous baseball card that has made a difference in the hobby. It doesn't have to be an old card, it can be new, and if it is new it doesn't have to be an autograph, jersey, or whatever. It can be anything, and you the fans will decide on what you think belongs in the Hall. One card is going to be elected today, and here we go!

So, this card is the most famous baseball card of all time, we can all agree. It has sold for over 1 million in the past, mostly because of how old and scarce it is. There are only 40 or so copies rumored to exist. Back in the late 1800's, baseball cards were included when you purchased cigarettes or tobacco. Companies like Allen & Ginter and Goodwin Champions were behind these cards, and many kids wanted a card of their idols. So, the kids would buy this stuff, and this player didn't want to be included in the set due to this issue. So, they cut off print run for the cards, and some like recent cards have leaked out into the public.

This is a 1909 T206 Honus Wagner baseball card, and this has made Honus more legendary than he would be today. Wagner is one of the best players of all time, and his baseball card is in my opinion, the best! So, without further due, I present Honus Wagner to you:

I got to see this card in person once at the Baseball Hall of Fame this spring, here's a picture of it (and me!!!) 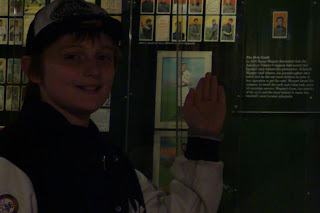 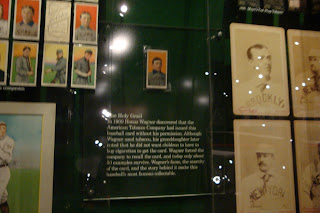 So, guys, please leave a comment below on what you think should be the second card voted into the BCHOF. For a card to get in it has to get at least 3 votes so think about it, there is one that you all can agree on! See Ya!
Posted by Drew at 8:33 PM