Hey guys, here's part 3 of our card show breakdown, the last of the night! More will be posted tomorrow!

Well, I bought a TON of game used cards at this show, here is the list of the cards I bought:

Leon Washington 2006 SPX Rookie Jersey Auto!
This is an awesome card! It features an "event worn" game used piece, stupid rookie premiere, but with the addition of his autograph, this makes out to be a sweet card! I got this for like $10 bucks! It is also numbered 953/1650! Sick Card overall!

Patrick Willis 2007 Bowman Chrome RC Refractor #ed/1079!
This one came for free, along with the next one, in a great deal that I think we stole from this guy! 18 bucks for 5 sweet cards, and this is an awesome freebie! He was selling this card for $25 and I got it for free!

Tony Hunt 2007 Bowman Chrome RC Refractor #ed/1079!
Like the last mentioned, this one I got for free! Hunt apparently is a decent full back for the Eagles right now. That wraps up the football purchases, time for baseball! 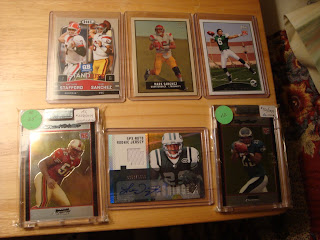 2003 Upper Deck Play Ball Joe Dimaggio 1956 Game Hitting Streak Card!
This is an interesting odd ball sort of card I bought for $4. There is a thick card of the box score for each game in Dimaggio's hit streak! This is game #43 of the streak, in a 7-2 win over the Red Sox! Sweet! Joe D was 2-4 in this game with an RBI. It's a tough card to explain but you'll see in the pictures! For $4, a card of Joe D, you can't go wrong!

1992 Bowman Mariano Rivera Rookie Card
This is a card I hunted down for a while, and I finally have it! This now makes my Yankee rookie card PC a lot easier, with 4 guys I need right now that would cost a dollar or less to buy! I got this for $20, I consider it a bargain! I'm lovin this one, a huge piece of my Yankee collection!

2005 Donruss Greats Yankee Clippings Mickey Rivers Jersey Card!
You saw Mickey and you thought Mantle I betcha, well, you're wrong. A Mick the Quick jersey card definitely was a nice addition, especially for $5. A nice deal and a sweet card, especially the jersey piece in the shape of the Yankees logo!

2001 Fleer Platinum National Patch Time Dave Winfield Relic w/pinstripe!
This guy seriously made my day, and I'll explain that tomorrow, getting to see him was great! He is a huge guy! This card is sweet and would be sweeter signed. But an $100 autograph, I'll pass. So I got this card for $10, not too shabby! Sweet!

2007 Upper Deck Sweet Spot Classic Memorabilia Don Mattingly Jersey Relic!
A very sweet Donnie baseball jersey, that I got for $7.50, a pretty nice deal! So I got a Mattingly jersey to go along with the Winfield, or the opposite way around, and this is a card I've wanted! I need his autograph to get the Triple Play of cards: a rookie card, auto, and jersey card! I know I've completed that for Cano, but not sure who else. So, the money has added up and total I spent $175, but there is more!

2007 Upper Deck Sweet Spot Classic Memorabilia Goose Gossage Relic w/pinstripe!
Another cool jersey card from a Yankee! Goose was awesome, and hopefully someday I could meet him! I picked this one up in that deal I mentioned in the football section, so another Hall of Famer in the books! I love Sweet Spot Classic!

2008 Upper Deck SP Legendary Cuts Nolan Ryan Legendary Memorabilia #ed 26/34!
Well, I saved the best one for last! This was also in that deal, 18.00 for the Leon Washington auto jersey, this, the Goose, and the 2 chrome rookies for free! This is a sick card, a highlight in my collection! Please tell me did I get an amazing deal at that vender or what? Overall I was pleased by the huge selection of game used, and although I didn't see it all, it was cool!
So, tomorrow I hopefully will have up Chapters 4,5, & 6 in my masterpiece book only availible on drewscards! See Ya!

Chapter 4: Wantlists
Chapter 5: All Star Autos!
Chapter 6: What did I win?

click to enlarge photos
Posted by Drew at 9:03 PM