Hey guys, Drew back here, great news coming up but 1st, some mail I got today, from William of foul bunt. I want to say this 1st that he is a really good guy and you should really check his blog out! Anyway, he sent me some nice stuff, here's what I sent him, and here's what he sent me: 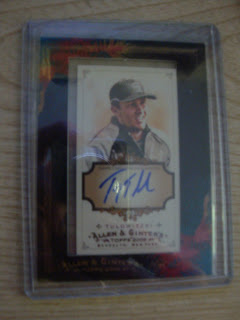 This is basically a replacement for my Rich Hill Ginter auto, and it is sweet! We finalized the trade just before Tulo hit for the cycle (for MY fantasy team!!!), and before we had the Tulo question in the Grandpa Roy Column. It's an awesome card, the only one I knew I was getting from him. I told him to send me some Yanks and we had a deal, here are those cards: 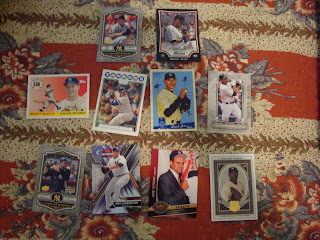 1: 2009 UD Piece of History Phil Coke RC: This is a much needed sweet card of Mr. Coke, one of the Yankees top relievers currently (other than the other Phil)!

2: 2009 Bowman Derek Jeter: One of my favorite Jeter cards I own already. Just that picture, other than the boring Bowman design, makes this card. It shows Jeter being a great dude, signing autographs for the fans, and it's a nice summer day in the picture, and it shows him in those pinstripes! Overall, a great card!

3: 2006 Topps Mickey Mantle Home Run History #506: For some reason, I typically forget about this set, even though it's a Yankee set! One of the best players of all time, and is my favorite vintage Yankee (that could be Yogi sometime soon). The sad thing about this one is that it isn't this. Cool still

4: 2008 Topps A-Rod MVP Insert Thing: This is one of the cards I liked the most about 2008 Topps. A nice daytime photo (you notice how I like daytime pics better than night time, they make the card alive!) of the MVP (not this year) loading back about to crush one out of the park.

5: 2008 UD Goudey Mariano Rivera: This is a very cool card of Mo. (Notice the title of this post) I really enjoyed opening this product last year, definitely one of my favorites, but this year, iw and more iwwww! I am a huge fan of this set and card especially!

6: 2008 UD Piece of History A-Rod: The 2nd of 2 A-Rods in the lot, a very cool card. This is arguably my favorite set of 2008 along with Baseball Heroes, A&G, and Goudey, and this card is sweet! I've busted 2 boxes of this and haven't gotten the full set yet, I'll have to post a wantlist (speaking of wantlists, I'll post about it some other time, Lazy Me!)

7: 2009 UD Piece of History Francisco Cervelli RC: I really needed a rookie card of this guy, I haven't gotten one yet! So I can cross him off my Yankee Rookie Card PC list thankfully, the only rookie I haven't pulled yet I assume. Similar with my issues of pulling Longoria rookies last year, he's all over my packs this year! So this is from the new and completely un-improved Piece of History, which looks very nice, but, exactly like last year.

8: 2009 UD SPX Joba Chamberlain: One of those 09 X sets. Joba has had a pretty good year, it seems if he pitches 6 innings and gives up 3 runs than its the end of the year in New York. I'm sure any team (ahem, Indians) could use those innings. Remember New Yorkers: This guy isn't our ace, he's our 4th best pitcher (Andy does get the nod at 3). No comment on the huge X's though, and if you really need a comment, check this post out!

9: 2009 UD 20th Anniversary Set Joe Torre: Sweet card! I definitely needed one of these! My conversation with the Torre card:

10: 2009 UD SP Legendary Cuts C.C. Sabathia: The best Yankee card out of the bunch, I love this one. I want to tell you that I love studio shots, oh no, you all hate me now! In fact a couple years ago I would go to mlb.com right before the season and check out all the stars profile pics, and I even made tiny paper cards of them (with those pictures!) Anyway this is an awesome card in a non Legendary player Legendary Cut set! These cards are cool though I will say!

So, thanks for the trade dude, and see ya later!