Hey guys, Drew back here with my favorite part all day! Here is the next chapter in my 6 chapter mini series!

Al Oliver. Bill Madlock. Dave Parker. Cecil Fielder. Steve Carlton. Dave Winfield. Orlando Cepeda. An all star lineup indeed, including 3 hall of famers. Also WWE superstar Rick Flair and TV Reality Show "Hells Kitchen" contestant Chef Robert Hesse were there signing, but I didn't bother with them. The hall of famers were more expensive, $100 for Winfield, $45 for Carlton (which I wish I did), and $30 for Cepeda (I wish I did this one too). Instead I bought my tickets for Fielder, Oliver (freebie), Madlock (freebie), and Dave Parker! So no Hall of Famers for me, wait hold up on that!

My dad & I were walking around looking for the next vender to hit when all of a sudden I spotted out a HUGE guy in the crowd, sticking up at least a foot above everyone one. Even from the back side, I recognized who it was! Dave Winfield! So he was going to Nathans to get a hot dog, and I hate to say it but we stalked him there. Although we weren't ordering food, we walked behind him in line, and my dad called out "Mr. Winfield! I'd like you to meet my son!" He turned around saw me, and we shook hands, my favorite moment of the day. I asked to get at least a picture taken with him, but he told me "Hang on, I gotta get me somethin to eat!" I'm still hanging on apparently. Heres a picture of him getting mustard on his hot dog. This picture will be a moment in my life I'll never forget! 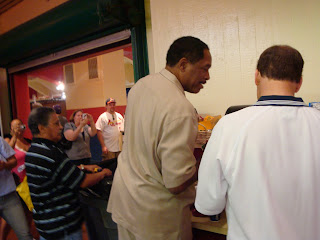 We left him alone after that, so we didn't bother him while he ate. So, we left Mr. Winfield in the Nathans room and we went to meet Al Oliver next! So after a pretty long line, talking to a guy that was dropping f bombs every second right in front of my face! But eventually we got to see Mr. Oliver, and he was an awesome guy. Here is a quick slideshow of me & him:

Next up was Bill Madlock, and eventually we got to get to meet him and get his autograph! He was a cool guy, and he signed both of our cards. This was truly a Pirates week, and I met another one later that day! Here's a slideshow of me & Mad Dog: (not my bat)

Well the next guy I saw was a little later, after picking up some singles, was Dave Parker. I only got 1 picture with him, so here is me & Mr. Parker, along with the picture of the cards I got signed! 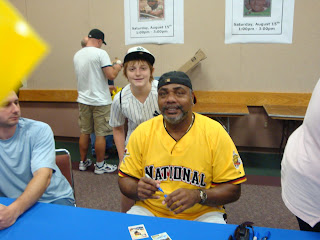 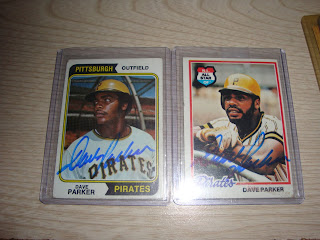 He was a nice guy too! Although I only had 1 ticket for him, he still signed both cards! Man, if he didn't use drugs heavily, we could've had another 500 homer run hitter and a new Hall of Fame member!

Lastly, was my favorite guy of the day, Cecil Fielder. Mr. Fielder was kind enough to sign 2 cards and an 8 x 10 with 2 tickets (1 ticket was given to me after he found it on the ground and he didn't feel like waiting in line)! So I now have 4 8 x 10's of Yankees (Bruney, Roy White, Chris Chambliss, Cecil, all 4 have certificates)! Here are the pictures with Cecil!

So obviously my favorite part of the day. Thanks for looking and see ya!
Posted by Drew at 7:23 AM