Hey guys, Drew back here. I've been kinda busy lately, had my 1st game last night and CCD tonight (Only 4 more classes w00t!!!). In my game I went 1-2 with a line drive double way over the center fielders head and I walked as well. 2 RBI's, 2 Runs, that's the way I roll. I also made a gold glove caliber play at the hot corner (third), stabbed and caught a line drive to my side. I got the game ball, and being the first game for me on the big field, I was pumped. Anyway, I recently worked out a trade with my Awards helper and 2009 Trader of the Year Alfredo, who has the blog My Past Time... I Love It!! It's a great blog, and he is certainly one of the more generous guys in the community. I only scanned my favorites, because I've decided to do that now, it's hard to post everything! Anyway, here goes... 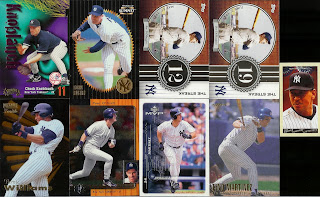 Wicked sent me a bunch of 90's Yanks, which is good because 1) I don't have many of them, and 2) they were awesome back then. The Paul O'Neill card is an instant favorite and I really like the Bernie too. I actually bought Bernie's first CD, he does a jazz thing and it's pretty good though I can't stand jazz music, kinda boring. I've never seen the 1996 Fleer cards, they feel really cheap, but they're nice. He also included some more modern stuff, and the DiMaggio's are really cool. 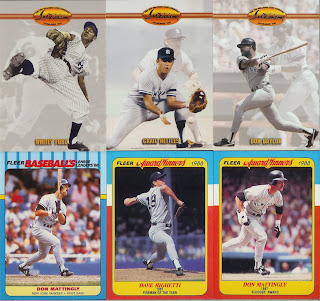 Ted Williams Cards are pretty nice. He included 3 of them here, Ford, Nettles, and Don Baylor. The Baylor will be great for a through the mail, since I don't have much of him. Also, some cool Fleer inserts, including 2 Mattinglys I needed. Cool! 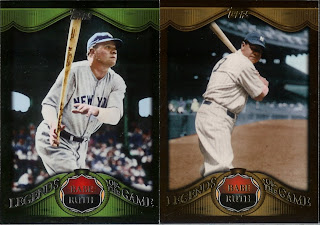 I requested these off his trade bait posts and they are really sharp cards. I have many of the 09 Topps Legends of the Games but these 2 slipped by. What are the brown borders from? Target? Walmart? Let me know, just curious. 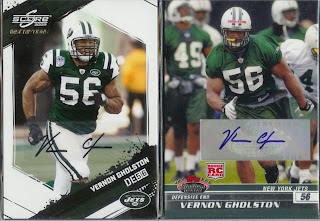 The 1st two of 4 hits were Vernon Gholston autographs. Vernon certainly hasn't looked very good in the NFL so far, but I figured since I need him for the Jets Auto PC I should get them from him. The left one is from 2009 Score Inscriptions and the right is from 2008 Stadium Club. The Score is numbered /199, and I like that one more to be honest. I'm not a huge fan of Topps stickers, especially the way this one was placed. 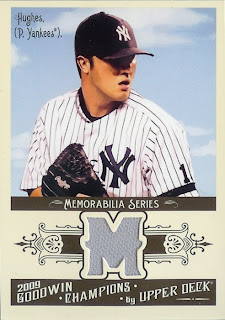 The next is a relic from 2009 Goodwin Champions of Phil Hughes. I now own 4 of the Yankee relics from this set (Wang, Posada, Nettles, Hughes), and I plan on more. They are really nice looking, and the set is very neat looking compared next to each other. Phil is starting tomorrow, and I hope he does well. Maybe he'll replace the worst starter so far, Javy Vazquez. Hopefully Javier can pull it together though. But yeah, Go Hughes! 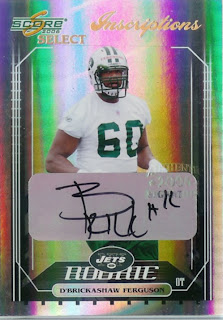 The last card is I think my favorite. An auto of D'Brickashaw Ferguson. First off, when this dude was drafted by the Jets a few years ago, I had no clue who he is and what kind of name D'Brickashaw was. He kinda stunk it up at left tackle for the first few years, but he's gotten much better now and I like him. He made the 2009 Pro Bowl and is one of many strong parts of the Jets O Line. This card is a rookie auto from 2006 Score Select Inscriptions, and it's numbered 025/250. His auto spells out Brick and he added number 11, which must have been his college number.

Overall, an awesome package from Wicked, everyone please work out a trade with him, shouldn't be hard with tons of cards for trade that he posted recently. Here is a link.

One more thing, we have 22 guys in the bracket so far, and we need more. We've done well so far, but I know there are some terrible autos just waiting to be added to the list. If you have any ideas, email me or leave a comment here or on a recent post. I have 3 people who volunteered so far to take a region, so I should be set. Just need like 40 more for the list, haha!!!