Hey guys, Drew back here, with a very nice mailday. First, on Friday I came home from NYC to find a box waiting for me in the mailbox. Tigre, or Wax Pack Relapse, likes to send boxes of cards to people out of fun now, and I was one of the first to receive one of these packages. He put a little stack of cards that could have been shipped for $2.00 or so in a box of 2009 Topps Sterling! I am probably never going to open a box of Sterling unless A) I win the lottery (when I'm able to do the lottery that is), B) It's not my box, or C) I make some bad decisions when I'm older. Sterling is nice, but hardly often do you get the value that you could get for $250 or whatever the price is. Sticker autos in like every OTHER box is a ripoff too, there should be an auto in every box and maybe, a nice high quality patch. Ok, so that's my quick rant on Topps Sterling. Moving on. 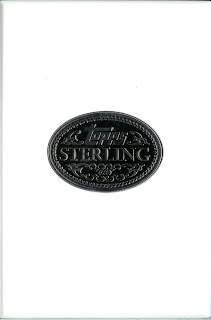 Did I mention the boxes look and feel amazing though? ANYWAY...

Mr. Relapse sent me a handful of numbered Yankees and inserts and stuff, let's get this party started yall. 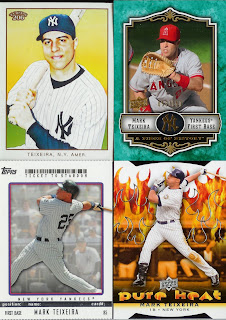 4 Mark Teixeira's. Nice! I don't have much of Tex, but these 4 cards help. I now have the base, blue, green, and Cut From the Same Cloth cards of Tex from 2009 Piece of History, so I guess that's pretty good. The bottom left is a perforated card from Ticket to Stardom, which should be the base card since it is a ticket set and all. The bottom right card is the Pure Heat insert, which are pretty cool looking I have to admit. And, the Topps 206 is the short print back, with just the name, so that's cool too. 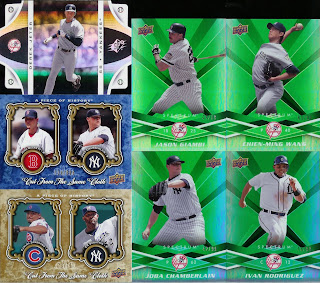 Wow, look at that color! 4 2009 Spectrum Greens numbered to 99, of Pudge, Joba, Giambi, and Wang. Only Joba is still here and sucking in New York. The Piece of Historys are nice too, except I can't stand when they pair Yankees with Red Sox, they don't want a Yankee on it and we don't want a Sock on it. But they are very nice looking cards. The Sabathia one is numbered to 75 and the Joba one is to 999. Lastly is a 2008 SPX Jeter base, and those are really cool looking, my 1st one of those. 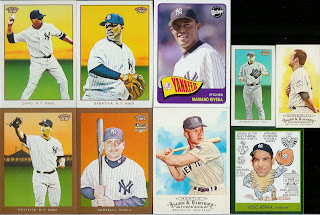 Here are some retro style cards, Cano and Sabathia base from Topps 206, thanks for the Cano, do have it but everything is appreciated. 2 "bronze" parallel cards of Pettitte and Cervelli, are these 206 cards getting suddenly popular in packages? I think I have close to the whole team bronze set! Also, this Rivera card is coming from everywhere too! I've gotten at least 3 of them in the past 2 weeks, after not seeing it ever before. It is a really nice card nonetheless. Mantle base and Joba mini from A&G, very nice, a Joba 206 mini, also cool, and a very sweet Yogi Berra 2009 Goudey mini green border! 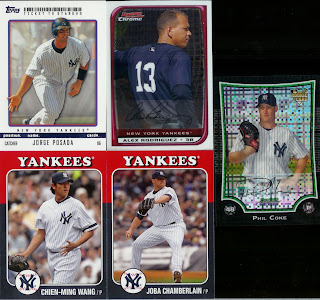 2 Upper Deck Retro Parallels of Wang and Joba, I didn't have either so that's cool. Also a 2008 Bowman Chrome A-Rod, a 2009 Bowman Chrome Phil Coke rookie x-fractor /250 too. He's gonna be good, I sent him a TTM in the spring but got a RTS (wrong address, my bad), I wish he was on the Yanks still though, Chan Ho Park and Joba looked terrible last night. Lastly a Posada numbered 20/99, an eBay 1/1!!! Well, I would celebrate that if I was 2 years old, grow up youtube fools! It's the blue parallel of the Ticket to Stardom set, and I really like it! 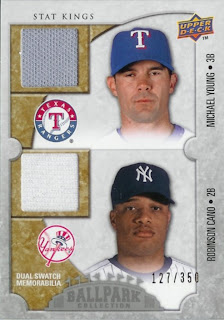 And... that is a pretty sweet card for the PC! It's from 09 Ballpark of Cano and Michael Young numbered to 350! Now I have 3 of his 5 different duals, need the one with Posada and the one with Damon. This is a very nice card, and I really appreciate you sending it dude!

Thanks SO much for the awesome cards and the Sterling box! Everyone check out his blog!

Lastly, a card I picked up on eBay for a nice price... 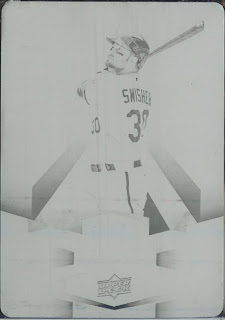 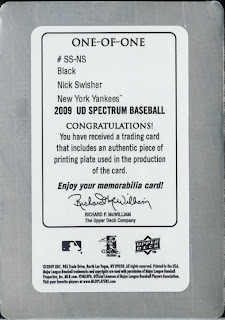 Thanks for reading, and See Ya!
Posted by Drew at 6:38 PM