Hey guys, Drew back here. I went to NYC yesterday, didn't do too much, went to the ESPN Zone which was awesome, and went to Strawberry Fields. I'll have some pictures up soon, but for now, here is some mail I got from reader Chris. Chris had some 2010 Topps I needed and we worked out a deal, and here is what I got: 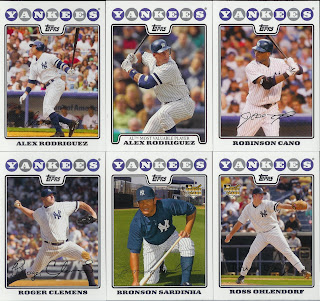 He just broke a blaster of this stuff so he sent some to me. I needed the A-Rod regular, the Sardinha, and the Ohlendorf so that's good. 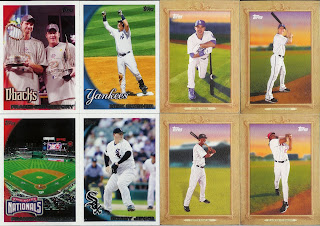 I didn't need the Swisher but it's appreciated. I finished cards 1-330 with the other 3 base though! Got about 1 1/2 months to wait for Series 2, but I do need inserts. These 4 Turkey Reds helped but I still need 28 of them, so please check my wantlist on the side bar and let me know if you have any I need. 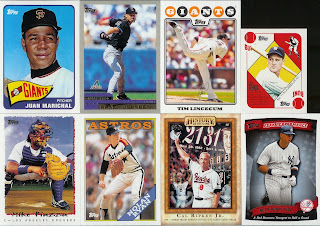 Wow! I'm not collecting the Target minis but I do collect Yankees, so the Gehrig is an awesome card! I needed the 5 Cards Your Mom Threw Out inserts which brings me to need 25 of them, so I have exactly half. Again, check the wantlist and let me know if you have any. I only need 3 History of the Games now to complete the set, numbers 9, 14, and 19, so let me know if you have any of those. Lastly, I really like the A-Rod, not sure if I'll collect this set all the way or not but I'm trying, I need about 30 of them so I'm still not sure. 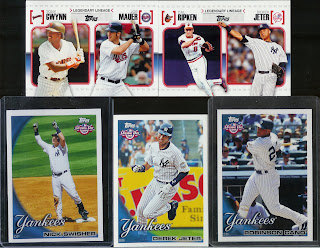 Well, no need to buy 2010 Opening Day. I got my 3 favorite baseball players so I'm happy that I don't have to buy any of it, unless I get it somehow. The Jeter picture is pretty nice and same with the Cano, I'm assuming those will be the pictures for Series 2. For Legendary Lineage, I need 10 more cards, again, check the wantlist and let me know if you have any.