Hey guys, Drew back here. I have had so much work and other things going on in school lately that I haven't had much time to post. I had a project due yesterday, an essay, a quiz, and a test, not to mention the final day of the 3rd quarter. There is no way I could post through that mess. Anyway, I got this blaster for Easter from my parents, and we were hoping that we wouldn't have to deal with this again. Speaking of, no word from Upper Deck yet, but I understand why. Here is the break, check it out: 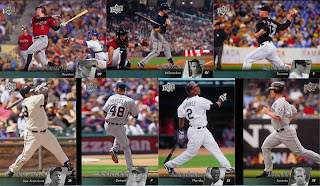 First, just a few base highlights. Only 1 Yankee was pulled in this entire box, and since it was Jonathan Albaledejo, that is pretty pathetic. Got Pence (who is sucking it up for my fantasy team so far), Braun, Halladay, Kung Fu Panda, Porcello, Han-Ram, and Aaron Hill. Not too bad, especially since most Upper Deck blasters have a ton of nobodies.

A few checklists and Ballparks. Got Wrigley and Fenway, 2 stadiums I want to visit at some point. Nothing much interesting else here. 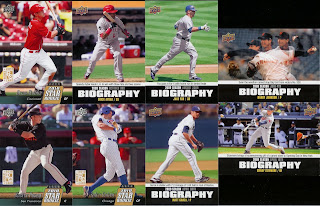 Star rookies of Buster Posey, Drew Stubbs, and Tyler Colvin is a nice group. I am starting to like the Biographies, UD used good photos and they selected some cool things. The Randy Johnson one is awesome! 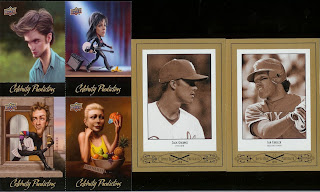 Wow, so far I think I've opened 20 retail packs and 2 hobby packs of this stuff, and the SAME Celebrity Predictors keep popping up. I now have 2 Chris Martin/Paltrow cards, and 2 Pattinson/Stewart junkies too. The Vintage cards are pretty nice though, Greinke and Kinsler aren't bad pulls by any means.

These inserts are pretty nice. Pure Heat is cool, the Beckett is most certainly for trade, but yeah, it's a pretty cool design. The Supremes are ok, I'm kinda so-so on these, kinda boring looking, even if it's shiny and scans horribly. And All World is really nice, I like these the best out of the 3. All 3 of these are for trade as well as almost everything in this break (not the hit). Speaking of hits......

Nice! King Felix jersey swatch! That's pretty cool, especially since he's a star on both of my fantasy teams. Even if it's gray, at least there is a relic this time, and he's an awesome pitcher.

Much better quality in this blaster, though not really many Yankees to add to the collection. See Ya!
Posted by Drew at 4:57 PM