Check Out My Cards Purchase Part 1

Hey guys, Drew back here, with a nice new shipment of sweetness in my mailbox, I am a happy guy. Especially after spending my $60 Easter cash on Check Out My Cards! I've bought from this site I think 3 or 4 times now, and it is one of the best websites ever invented.

Today in school, we had our retreat. The sports were fun even though a fight broke out during Capture the Flag, and the guest speaker was really cool. Duane Brooks, Defensive Line Coach from Yale, spoke to us about his life, he played for the Patriots, Redskins, and Saints, but didn't do anything major. I don't think he even has a card, after checking Beckett I got nothing. Just wanted to tell you all about that, he was really cool.

Anyway, getting back to the first part of my shipment, pretty sweet stuff especially when there is much better stuff in the next part, stay tuned for that possibly tomorrow or Sunday! Here they are: 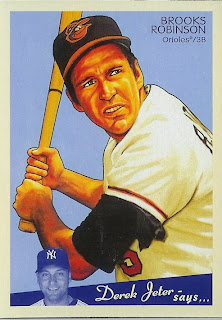 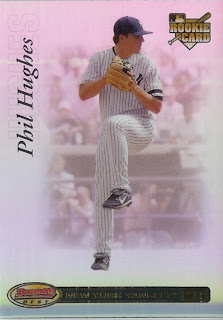 2007 Bowman's Best #55 Phil Hughes RC /799
Considering adding Hughes to the PC list, not major but I'll try to get some of his over time. This card is numbered and awesome, Bowman's Best is a favorite of mine and it was a must have for 2 bucks. 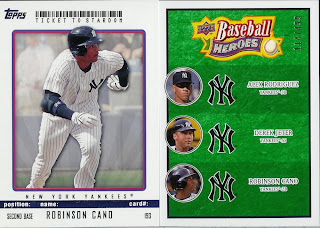 2 Robinson Cano's:
- 2009 Ticket to Stardom #193 Blue Parallel /99
- 2008 UD Heroes A-Rod/Jeter/Cano #188 Emerald Parallel /499
I want to complete the Ticket to Stardom rainbow, I have the base, the blue now out of 99, and the red out of 1. It's kinda pointless because only 2 things change between every parallel, maybe a color border would be nicer. I also wanna chase the Heroes parallels, unfortunately I've only gotten parallels of the above card, I think I have the base and 3 other numbered parallels of that, so that's good. 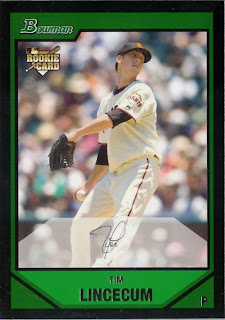 2007 Bowman Draft #BDP11 Tim Lincecum RC
I got this for like 2 dollars, a steal in my opinion, especially when this guy is done. Lincecum is becoming a favorite of mine, he is a freak! 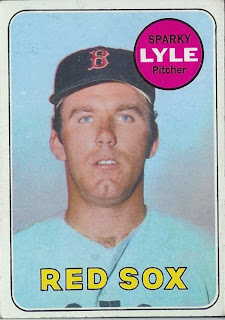 1969 Topps Sparky Lyle RC
The last card of part 1 belongs to one of the more underrated relievers in baseball history, Sparky Lyle. I think I got this for 3 or 4 dollars, and it's a nice add although he was a filthy sock. Every order I am making I'm trying to add at least 1 vintage card from pre 1970, since my Pop Popps gives me a ton of 70's cards. This card isn't mint at all, it's pretty worn but it's nice overall.

Well, that's it for part 1, part 2 will be awesome, so stay tuned for that. Before I go, one quick update on the Bracket.

I have 39 guys on the list right now, about 60% filled. But, there is still 40% to go, so I need your help. I've added some on my own, and I think I have one more in mind that will be on the list soon, so, just try to think of some players and let me know. Thanks!