Hey guys, Drew back here. I just got my report card, and I saw an instant replay of exactly what happened last quarter, I came .375 of 1 point short of Principal's List, which really should be rounded up and it's extremely ridiculous. Anyway, I got back from Upper Deck yesterday, and I'll have that posted soon, but for now, the last 5 cards in my Check Out My Cards purchase. Let's see what Drew bought shall we? 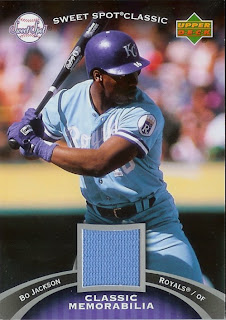 2007 Sweet Spot Classic Bo Jackson Jersey
This card is very nice. I got it for I think 2 or 3 dollars, and the baby blue jersey doesn't really fit Bo Jackson, which makes me laugh. I love the Sweet Spot relics, and I'm considering getting even more! I have an Al Oliver, Goose Gossage, Don Mattingly, Reggie Jackson, and I think Dave Parker too, so I admit I'm hooked to these! 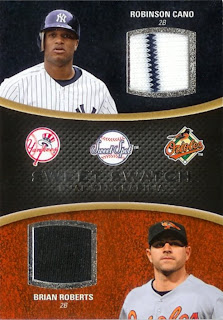 2008 Sweet Spot Robinson Cano/Brian Roberts Dual Jersey
Now this is an awesome card! I like Brian Roberts and I also really like unique jerseys! This is a nice add to the Cano collection, and I gotta try to find the patch version. 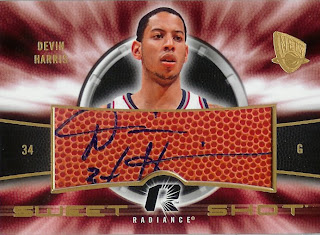 2008-09 UD Radiance Devin Harris Sweet Shot Autograph
I'm not a basketball collector, but I do watch and love to play basketball. You may remember WAY back on this blog when I went to a Nets game, and from that day on, Devin Harris became my favorite basketball player, ahead of LeBron, Kobe, and Dwayne Wade. So, when I saw this auto at a cheap price on COMC, I rushed to buy it. It's really cool, similar to Sweet Spot. 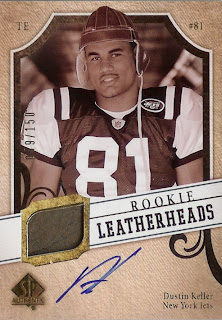 2008 SP Authentic Dustin Keller Rookie Leatherheads Auto /150
One of the big 2 cards in this purchase was this one. I got it for $10, and I wanted it from the second I saw it. It's monster thick, about the thickness of the Sweet Spot autos, and I really liked the concept of the cards. Now, if they didn't have autographs I wouldn't have wanted it, and even though Keller will most likely be a candidate for the Worst Auto tournament, it adds more to the card and it looks really nice. Plus there are only 150 of them. 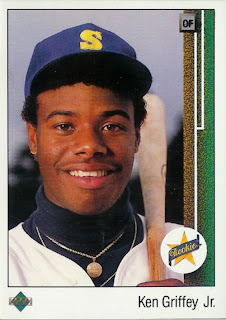 1989 Upper Deck #1 Ken Griffey Jr. Rookie Card
Even as a diehard Yankee fan, I love to expand my collection into some of my other favorites too. Some of my favorite non Yankees are Felix Hernandez, Justin Verlander, Tim Lincecum, Prince Fielder, Vladimir Guerrero, Albert Pujols, and definitely Griffey. I didn't get this card because I like Griffey, well, that is partly the reason, but the other part is that it is a monumental card. It's the only card in the BCHOF that I could afford so far, and I needed to try to get it. Now, 20 dollars later (a steal in my opinion), I now am holding possibly the most famous baseball card of all time (ok, second to Honus).

I think I made out well for $60 on Check Out My Cards, and after my good report card, I earned myself a trip to the next White Plains card show in May. That's what a 94.675 overall average (and 100 in Spanish) gets me! Anyway, I had a disappoint yesterday courtesy of The Man, Stan Musial. I sent him my custom card, and was hoping I wouldn't get one of those postcard things. So, I got it back yesterday, and not only was the custom sticking out of the side of the S.A.S.E, bent in half, and unsigned, but he included a post card. Take a look at it: 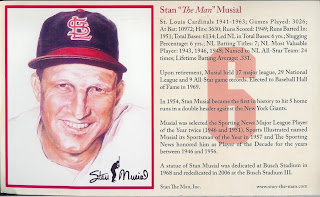 Nope, that isn't a signature. It's a biography with a picture. Yay. Now I can read about what I missed out on. I think either A) He'll give you a signed postcard if you include $, or B) he ran out of signed ones and wouldn't sign more. He is 90. This isn't as bad as the Whitey Ford disappointment but I'm mad about what happened here.