Hey guys, Drew back here. I had a game today following a CCD retreat day instead of school that was a legal absence for Confirmation, and an orthodontists appointment. Well, in my game I was late so I was benched for innings 1, 2, and 3, but following that I struck out and reached on an error. I missed another steal sign (I suck at those) and threw a horrible ball over the 1st baseman's head at third. Not a great day for me, but we won 3-2 despite. Ok, enough of me, onto the Upper Deck mail.

It's been a few months since I had my little incident of receiving this in my blaster, 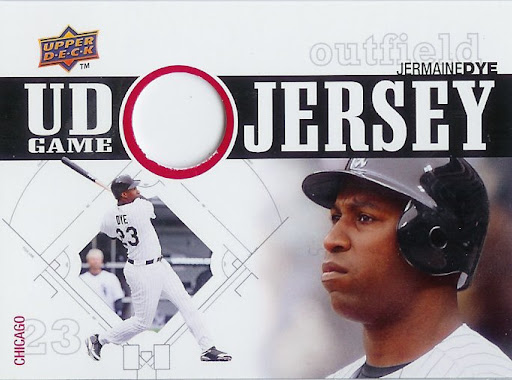 I finally got back from Upper Deck on Saturday. They included a letter of apology, and if you're bored, you can read it here: 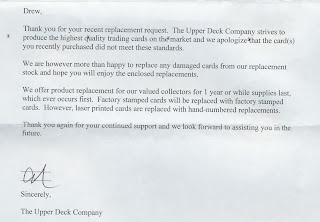 (you can click on it to make it bigger)

So, they included 2 hobby packs of 2010 Upper Deck, and here are the highlights of them... 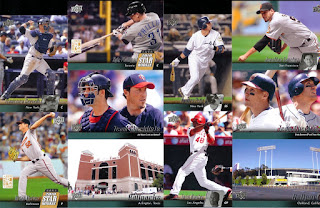 Nothing special in base but a Brian Matusz rookie, Ramiro Pena and Cervelli were my 3 highlights. 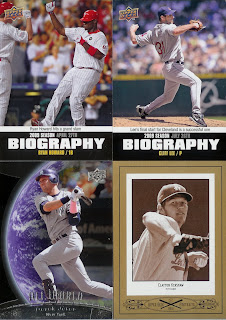 The inserts were nice, and I'm really happy about the Jeter since I didn't have it yet. The Kershaw is for trade but it is really nice, I think I know someone who may want it. I have 2 of the Cliff Lee's now too so that is for trade as well, but I like the Howard so I'll probably keep that. 2 Real Jerseys!!! And yes, there is something on the Dye this time, and a Derrek Lee too! I like that card especially with the blue jersey, yet they are both for trade (anyone have the Cano???).

Thanks Upper Deck! Now moving on to the last part for now, I got a nice TTM in today so that will most likely be up tomorrow as well as some Grandpa Roy Column stuff if I have the time. I bought this on eBay recently for $20 and I really like it! It's not a Cano or Swisher, but it is 3 great pitchers from the 70's-80's for the Yanks, and here it is. 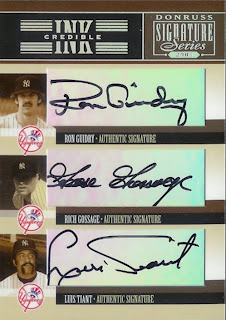 2005 Donruss Signature Series Inkredible Triple Auto
Ron Guidry/Goose Gossage/Luis Tiant!!!
This is an awesome card, and it looks fantastic. Tiant has a wild signature, but it looks pretty nice all in all. The stickers actually help the design, and the rainbow look is by far the BEST looking stickers I've ever seen. These actually look nice to be honest! You can't go wrong with a Hall of Fame auto and a borderline Hall of Famer in Guidry. This is my 1st Goose and Tiant, and 2nd Guidry auto so far in my collection. I love this card and it looks great in the collection!