Hey guys, Drew back here, and I am off ALL next week! WOOOOOO!!!! I'm really happy, and I also know that I can't slouch here because I have piles of cards just waiting to be posted. Let's start things off with some A-Rod and others. Dad picked these up for me for $10 last weekend and I swear he is more addicted to the hobby than I am! It's crazy how much he gets for me, and I really appreciate everything if you're reading. This is what it looks like when MANY 1990's A-Rod inserts collide: 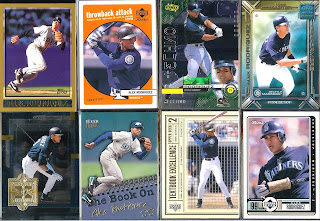 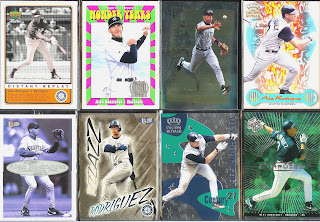 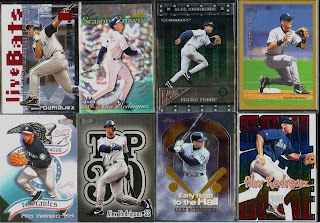 The 90's seemed so confusing. I'm curious to know if these are inserts anyway, due to the crazy base designs. It's all a blur, but there were some sweet looking cards back then and that's all I care about. 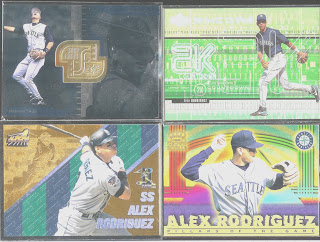 Here's just a few more, just horizontal ones. I have a pet peeve of scanning horizontal and vertical cards in seperate scans. I have several pet peeves, but I can't get into that now. 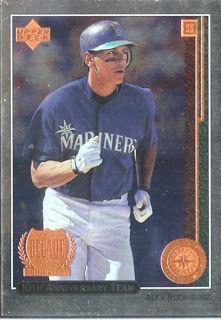 The "highlight" of this crazy assortment of A-Rod is this one portraying the old school Upper Deck designs. It's numbered to only 4000 copies! Now that is one limited card! Why not just put 0000000001/a lot on the back of the card! It's a really nice card but serial numbering was pretty pointless in the 90's. I basically ignore it. There were also a few more cards in this lot and here they are: 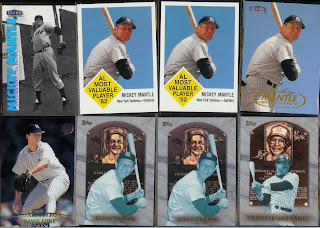 So I got lazy in this scan with the crookedness. Don't mind me being tired. So there are some Musial's, some Reggie's, a Cone and 4 Mickey Mantles. Nice! I've never seen the picture that is on the 3 Mantle cards, but it's nice. I wish we had more pictures of players, many guys are sick and tired of seeing that Ichiro pose over and over again ya know? It was pretty funny, the Cone was stuck inside the penny sleeve so I had to tug it to get it out. Thank god for chrome! 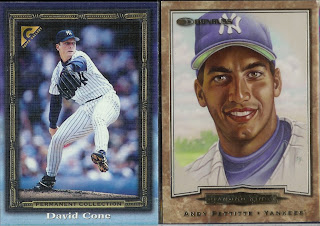 Last are 2 more numbered cards. I'll start with Coney. It's from 1998 Topps Gallery I believe, and it's some sort of parallel numbered to... 125! That's pretty low I'd say. It's got a canvas feel to it similar to Masterpieces and is a nice card overall. Next is a 1998 Diamond King Andy Pettitte I believe. Or is that David Ortiz? I think the skin tone is just a little dark here, and it's kinda creepy looking. Don't get me wrong the design is nice and the picture would be nice, but Donruss, Andy's face is almost pure white!!! This is numbered to only 10,000 copies! Lovely.

Thanks again Dad and I'll check yall later! See Ya!
Posted by Drew at 8:27 PM