Hey guys, Drew back here. The next package in the overhaul from last week was from Marvin of Trade Bait... The Great Chase. He currently needs only 9 more relics for the entire relic set from 09 Goodwin Champions, so if you have any he needs please help him out. If I have have anything he needs it's Yankee PC, so I wouldn't wanna really get rid of them. Anyway, Marvin sent me a ton of needs off the wantlist, and surprised me with what was coming. Here are the cards: 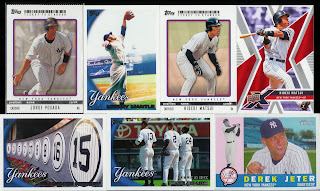 First off, a few Yankees out of many he sent. A bunch of 2010 Topps, which basically gives me a full Yankee set I think, I have doubles of most of the cards. I really like the A-Rod/Jeter/Cano card in the set, it's nice. The Jeter Heritage is cool, when it's not destroyed by that disgusting Sox logo. He also included a few cards from Ticket to Stardom, a Posada perforated and a regular Matsui. Those are nice. 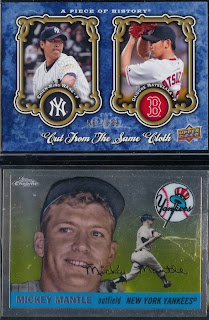 Next are a few more nice Yanks. A sweet Wang/Matsusaka Cut From the Same Cloth /999 parallel, and a Mickey Mantle chrome. The Mantles are always nice, just they produced WAY too many of him. 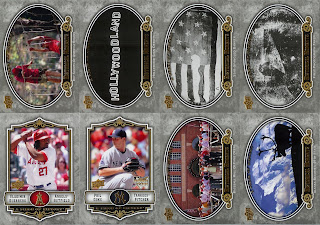 This is now the second time somebody sent me cards from the 2009 Piece of History set. I'm collecting the 2008 set, and if I ever get that finished I may decide to do the 2009 set. Still, cool cards! 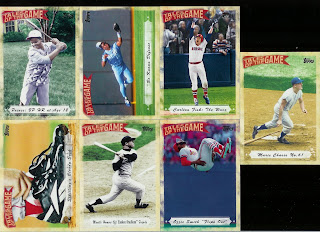 Next are a few insert wantlist cards, including a bunch of Tales of the Game... 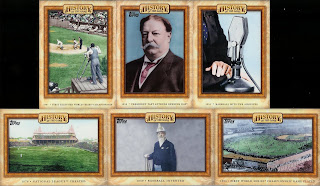 And History of the Game.... 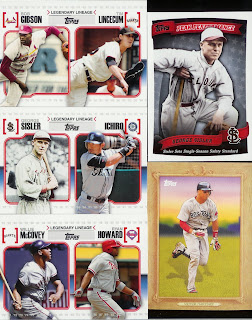 And a few others. He also sent a few duplicates of these, so they are for trade for any others I need. (Tales of the Game= 13, 18, History of the Game= 1) I really like the Gibson/Lincecum Legendary Lineage, did I mention I really like Bob Gibson before, haha? 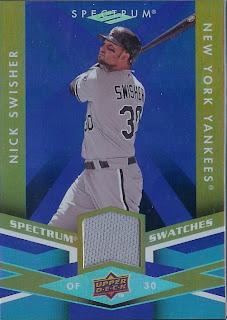 And lastly, he sent a Swisher that I didn't have, and actually, I didn't even have it on the wantlist. Whoops. It's from 2009 Spectrum, and it's a pants relic of my man, Nick Swisher. Next weekend if I'm caught up I'll post my Swisher collection. It's not nearly as nice as Cano, but still kinda cool. Thanks for recognizing the hole in the wantlist dude!

Thanks so much dude for the cards, I really appreciate it, and I'll get you a package out ASAP!!! Be sure to check out his blog, he is one heck of a set collector!

I wanted to put one more card in this post, I bought this off eBay for about $15, which is not bad, and this happened days before the Jets released Thomas Jones, which in my opinion was a terrible decision, leaving this 2nd year back alone with no help: 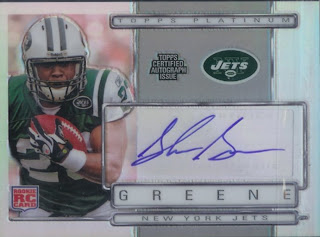 Shonn Greene. He's an awesome back I'm tellin ya. But honestly, I think we should keep the 1400+ yard rusher on the team for now, at least as a backup. You can't just let a guy of that caliber loose that easy. So far, I'm very unimpressed with the offseason, although we did trade for Cromartie, which should boster our corner backing crew. We dropped Thomas Jones, traded Kerry Rhodes for some draft picks, and really have made moves that didn't need to be made.

Back to the card, it's from 2009 Topps Platinum football, and it's the refractor version of the autograph. They have many variations in this product like every other product these days, and this is numbered to 550. It's a really nice card, and looks great when you tilt it. It's a sticker auto, which is the one thing I don't like about the card, but it doesn't look too bad there. I'm definitely hanging on to this one, this guy should be good, let's hope he doesn't get hurt.

Ok, I think that's it for today. Have 1 more package to post, but he said he is sending more so I'm gonna wait and post it all in one. Also have a TTM return to post, that should be up tomorrow. See Ya!
Posted by Drew at 7:12 PM