Hey guys, Drew back here, with the next package of I believe 11 packages this week. My mailbox is exploding this week because of the need for 2010 Topps, and I'm actually pretty close to finishing the base set, just 4 more cards (218, 242, 249, 264). The insert sets, however, will take some work. But I have until May to worry about those things, when Series 2 comes out. This trade I made with Cameron of Cardboard Heaven was made just before the hype began with 2010 Topps, and here are the cards he sent me: 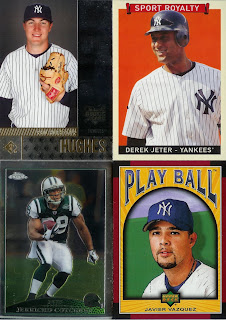 The trade was originally a 1 for 2 deal, him getting 2 and me getting 1, but we both included a few extras in the packages. Here are 4 of the extras he sent, a sweet Phil Hughes RC I needed, a Jeter Sport Royalty I needed, a Cotchery 09 Topps Chrome I needed, and a nice Javier Vazquez Play Ball card I needed. I may eventually extend my 2008 Goudey wantlist, I really like the Black & White player variations, so that means I should also try the Sport Royalties and Presidents. Only 11 more Legend SP's!!! 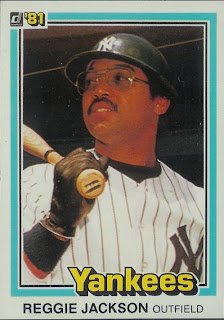 Cameron included this 1981 Donruss Reggie as well. I really like Reggie and I may soon throw him up on the PC's list too. He seemed to have his own world, but not as crazy as what's going on in Ozzie Guillen & Manny's heads! I needed this card as well, people are finding ways to send me cards I don't have, which is awesome. 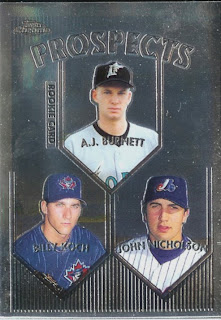 Just when I thought this couldn't get better, I saw this 1999 Topps Chrome A.J. Burnett rookie card! I have 1 of Burnett already but this one is much nicer, so it will be the replacement for Burnett in the rookie card hunt. This card is really nice, and Burnett has had a very successful career so far, in a quiet manner, well, except for the Pies in the Face. 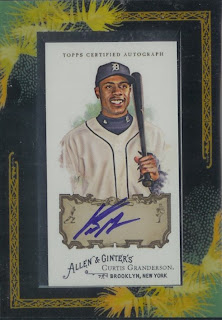 And lastly, the card I traded for, a 2008 Allen & Ginter Grandy auto! This isn't my first auto of Mr. Granderson, last year I got a TTM back from him, and he signed a postcard thing for me, and he had to bend it to fit it in the SASE. Anyway, this is an awesome looking card and a sweet upgrade for me! I hope Grandy has a big year this year and that the Yanks can go all the way... again!

Thanks Cameron a lot for the cards, See Ya!
Posted by Drew at 5:41 PM