Hey guys, Drew back here. I am very disappointed that not one person (other than William) has went out of their way to vote for me and try to win cards. I guess I won't win, which isn't a big deal I guess, I am happy I was nominated in the 1st place, but since we're still in March, I was hoping to be the Cinderella story of the awards, I guess that won't happen though. Well, moving on. Here are 3 recent packages I got in. The first one is my group break loot from the Troll. Marck almost forgot about mine, but since he included extras than I don't care, and I really enjoyed the package. Here is what came out of package #1: 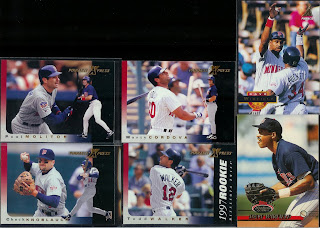 Since I got in late in his group break, the Yankees were already taken by Nico (where are you by the way?), so I took the Twins and Angels. I've always sort of liked both of these teams plus they had some good players. In the picture above there are some of my favorite Twins in the package, 2 sweet Winfields, a Molitor, a Knoblauch, a Todd Walker rookie card, and a Marty Cordova. 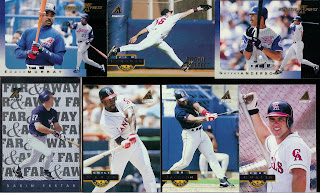 Here are a few of the Angels I liked. There is a really cool looking Darin Erstad insert, a Chili Davis, a Bo Jackson, a Chad Curtis, Eddie Murray, Garret Anderson, and a very nice Jim Edmonds rookie. I never knew some of these guys even played for the Angels, so it's cool to see them in different uniforms. 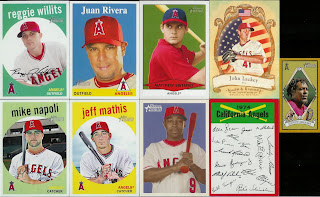 Here are a few more recent-ish Angels (all except one) that he included. 3 2008 Heritages, Willits, Napoli, and Mathis. The colors in the 2008 set made the cards look very nice. Next is a 2007 Topps Heritage Juan Rivera. Juan is a very underrated player and should be good this year. My favorite one in this picture is the mini of Vlad, which looks nice with my similar Joba Chamberlain mini. Those are some cool looking cards! 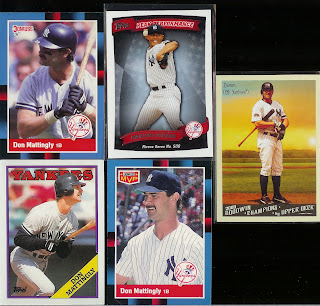 Here are some Yankees he threw in. A few needed Mattinglys, a 2010 Peak Performace Rivera, and a Goodwin Damon. Awesome! 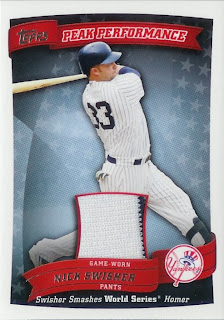 This last card completely took me by surprise. It's a 2010 Peak Performace jersey card with a small pinstripe sign of Nick Swisher! I've been close to buying these before and have gotten sniped, maybe by the Troll, haha! This is a very nice card and looks good in the Swisher collection. But, I am a little uncomfortable that these are part of his pants. I may not wanna touch it!

Thanks so much Troll! Everyone not only check out his regular blog, but also his new blog the Nitty Gritty! On to the next one, as Jay-Z says, this one from William of foul bunt. Yeah, he seems to make some sort of appearance on my blog every single week. He sends me so much stuff and I appreciate everything that he's done for me. He's trying to help me get some votes too, although we are a little too late. Here are the cards he sent me that I got on Saturday: 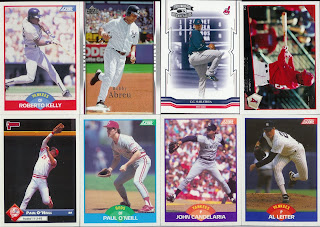 He put in some non Yankees stuff of guys that were/are Yankees, some old school Paul O'Neills, an Abreu, and a Sabathia all in different unis. The Al Leiter card is cool, haven't seen it before. 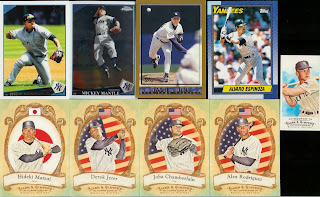 Next are some A&G National Prides. I have the complete set of those plus some of the extra Yankees too, so that's nice. I like the Mantle mini from 09 A&G, it's a very nice picture, one of the better ones I've seen. 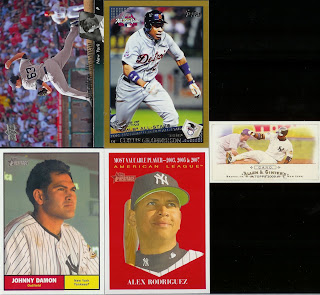 And the best for last! Some 2010 Heritage, A-Rod SP and Damon, awesome! A 2010 Upper Deck Jonathan Albaledejo, someone I barely even know is on the team, and a 2009 Topps Updates and Highlights Grandy Gold /2009. I have big expectations for Curtis, and I hope he does well. Lastly, a card I actually needed for the Cano PC, a mini from 2009 Allen & Ginter! Just the regular one, which makes me only need the A&G back and the No Number mini. Are the no numbers extremely rare or something because I hardly ever see them out there?

Thanks again dude, I really appreciate it! On to the last one.... from Tunguska of Long Fly Ball to Because. I never traded with him before until I asked for some 2010 Topps inserts. We worked out a deal and he came through! Here are the inserts, although you've seen them all 100 times already: 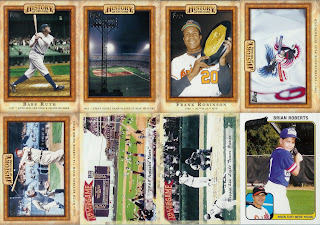 I only need 3 more History of the Games now, with 1 more coming soon, numbers 9, 14, and 19 are needed. For Tales of the Game I need 8 more cards, numbers 4, 7, 10, 14, 22, 23, 24, 25. I really like the Reggie Jackson hitting the light tower card, that's a really cool story. I did pull the Roberts When They Were Young yesterday so I'm going to offer it up first to anybody that has any of these players from this set that I need: Aaron Poreda, David Wright, Gordon Beckham, Jason Berken, Justin Verlander, and Russell Martin. If nobody is interested than a certain O's fan may get it if he doesn't have it yet. 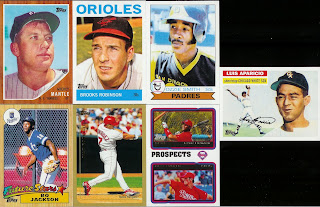 My Momma Never Threw Out these cards, but I do have 2 of the actual cards! I still need quite a few of these, check my wantlist on the sidebar and let me know if you have any I need. 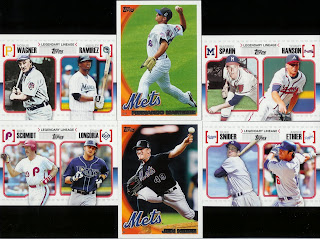 2 base cards I needed at the time were Mets. I pulled the F-Mart yesterday so that's for trade, but I did need the Niese, so that's good. I am closing in on the base set, someone is trading me the rest of them so that'll be good. I can collect inserts for the next 2 months until Series 2 comes out and I start over again. Speaking of inserts, he sent 4 Legendary Lineages too. Pretty solid matchups I guess, although Longoria will never be Mike Schmidt, Andre Ethier will never be Duke Snider, Hanley will never be Honus Wagner, and Tommy Hanson will never be Warren Spahn. I'd be amazed if that happens. 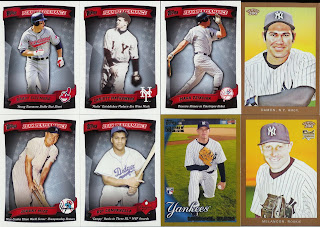 Ugh, Peak Performance. What a bland set, and I still need 30 of them! I hope I can just get it done, but if I can't then I'll just not complete it. I do like the Yanks however so Tex and Johnny Mize are cool. He sent me a gold border of Michael Dunn too, numbered out of 2010. He's not even a Yankee anymore, but it's still cool. The last 3 cards he sent were 3 bronze parallels from 2009 Topps 206, Mark Melancon, Johnny Damon, and the Frankenstein at the bottom of the post.

Thanks Tunguska! Your cards will be out tomorrow or Thursday! See Ya! 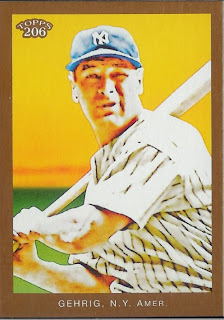 I don't know why Topps chose a photo
of Lou Gehrig getting kicked in the crotch :(
Posted by Drew at 7:34 PM