A Lot of Sand has piled into my house!

Hey guys, Drew back here, and on Thursday I got an amazing package from Joe M. of The Sandlot. He just started this blog and it's pretty cool so far. He's a Mets fan, so if you have any cards for him he is an excellent trader. He sent me stuff once before but nothing this crazy. Check out just some of the cards he sent in this jumbo package: 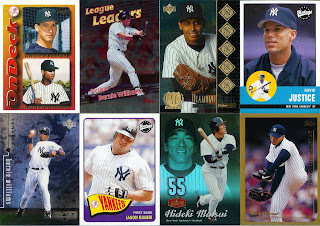 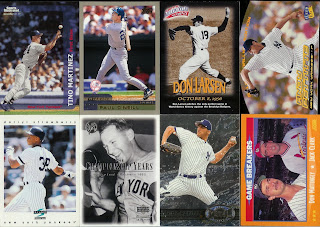 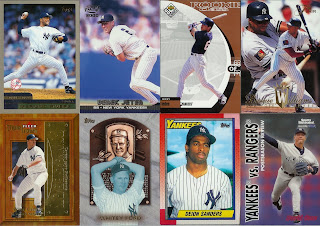 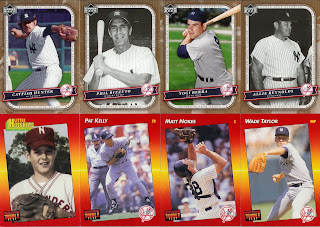 First, here's close to 30 Yanks, including a 95 Topps Pettitte rookie (not true rookie but sweet card). I like the Giambi UD Vintage a lot and the Metal Andy Pettitte is cool too. 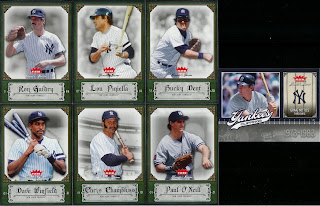 Some 2006 Greats of the Game. I love this set, and this is my 1st glimpse of it really. The Nettles is nice but my favorite is the Winfield. 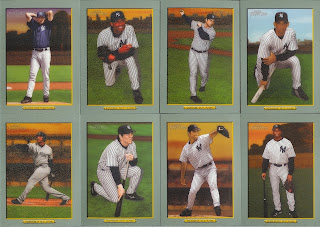 Some 2006 Turkey Reds. I had a few of these already but did need the Moose, Bernie, Giambi, Wang, Matsui and Sheffield I think. I really like Turkey Red and maybe I'll complete the Yankees sets and get them all. 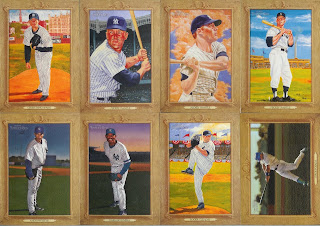 Hey look! 2007 Turkey Red! I have a lot of these now but I really like the Mantle with the clouds in the background and the Posada. I may have completed this Yanks set but I'm not sure. 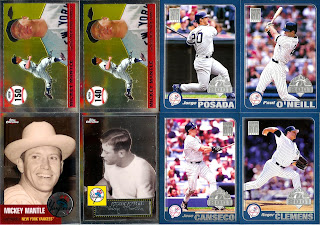 Here's a few 2001 Opening Day cards including Mr. Cheater Jose Canseco, Mr. Cheater Roger Clemens, and 2 of my faves. I'm so so on this set, the look is kinda boring. The Mantles on the left are very nice. I like the one with the hat in the bottom left, but the one next to it is boring. Topps has overloaded us with Mantles in the past few years, and it's kinda unfortunate, but I still love pulling Mantles. 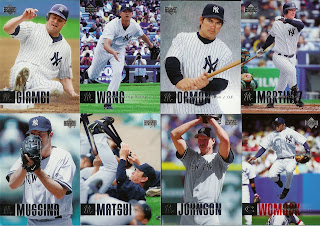 Some 06 UD. He sent me a TON of these cards and I needed most of them. Great photography as usual Upper Deck, I really like the Matsui, Mussina, Womack, and Giambi. I remember going to a game seeing Womack steal like 5 or 6 bases. It was awesome. The design isn't great on these cards but photography saved it. 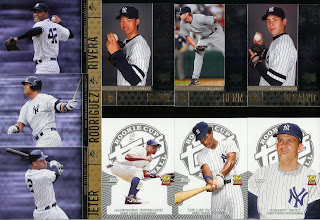 Some 2005 Rookie Cup and 2007 SP Rookie Edition here. I didn't know until recently that Bobby Cox was a Yankee, and I find it pretty cool. I really like the rookie card design in 07 Rookie Edition, although Henn, DeSalvo, and Igawa are going nowhere with their careers. 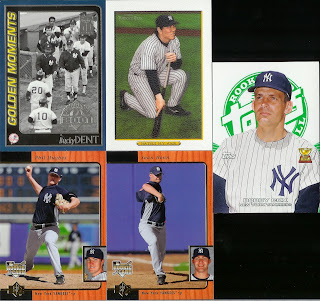 Here are a few more random cards, I suck at grouping cards for scans. I can only do 8 cards per scan so I try to make it work, but it never does. Anyway, the top left is from that Opening Day set and highlights Bucky Dent's famous home run, next to it is the Turkey Red white parallel of Hideki Matsui, and under that are 2 other Hughes and Henn rookies. I needed both of those and I am starting to have a lot of Hughes rookies. All the way to the right is a Bobby Cox green parallel from 05 Rookie Cup numbered to 199. I really like that card! 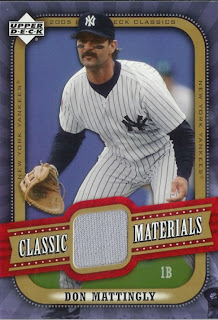 Lastly, we have none other than a sweet relic of a Yankee favorite of mine, Don Mattingly. I have him on the Drew is Collecting list at the top of the sidebar, and now I have a rookie card, 4 game used, and 2 autos of him. Not bad for a should be Hall of Famer.

Thanks SO much Joe, this helped me out when I was hurting from the tryouts and I really appreciate. Everyone be sure to check out his new blog!!!! See Ya!

THE SANDLOT
Posted by Drew at 9:06 AM