Friday's Trip to the Card Shop

Hey guys, Drew back here, with a nice card shop recap. Blogging has been one of the last things on my mind lately as I've had projects flying at me from every corner of the room with the most corners in it in the world! I had to do 2 school projects tonight and just finished them now, and I had to do one ALL of yesterday with my friend. Tomorrow I have school, right after I have track, then confirmation class, and then baseball practice, yes, all of that in one day. Crazy. So, since I have some spare time right now here are some cards my dad got for me at the shop! 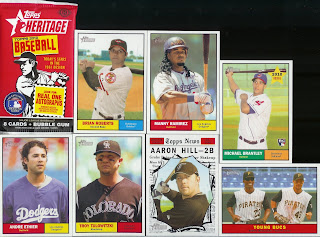 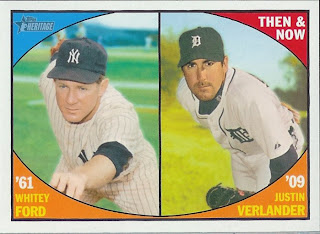 In 1 pack of 2010 Heritage, I got an Aaron Hill SP and a Whitey Ford/Justin Verlander Then and Now insert. I like the players a lot on that card, not so much the pairing though. It's pretty nice though. I really like the Newspaper SP's, they look sweet. Also got a Young Bucs card of McCutchen and Garrett Jones. 4 of the cards in this pack have players that are on at least one of my 2 fantasy teams. Not a bad pack! 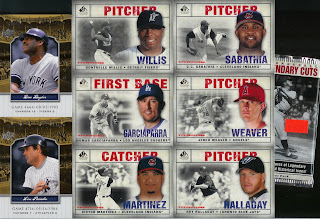 I got shut out in 2 packs of 08 Legendary Cuts. I like the design of these cards a lot but never have good luck with them. There was a guy in the card shop at the time buying box after box of 07 Legendary Cuts. Unfortunately, he HAD to open them in the car. By the way, I already have that Don Baylor Yankee Stadium Legacy, which is ridiculous considering I have like only 50 of them. 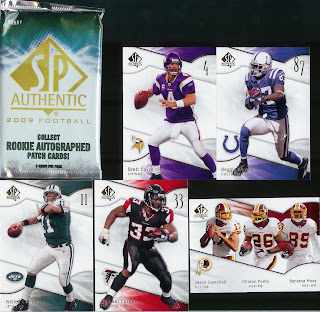 I also tried some of the new 2009 SP Authentic football. A very clean and sharp design as usual, and not too expensive either at $5 a pack. I like the Kellen Clemens even though he kinda sucks and the Redskins insert is neat... I guess. 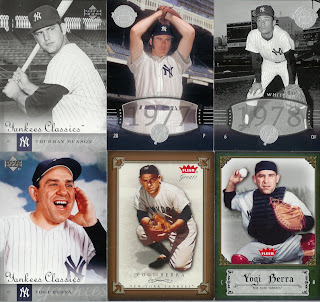 My shop has made some nice improvements. Now they have a nice little area full of Yanks. They aren't overly expensive, yet, aren't dirt cheap either. Oh well, figured I'd pick up a few. Nothing like Sparky Lyle for 60 cents and Roy White for 40 cents actually! Also got a nice Thurman and 3 cool Yogi Berras. I like all 3 but the middle one has some bad corner damage. 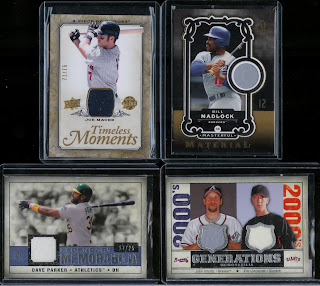 I almost fainted when I saw a huge box of relics and autos though! I went through each card and picked out these 4 relics. I got a 2008 UD Piece of History Joe Mauer jersey to 75, a 2007 SP Legendary Cuts Bill Madlock jersey, a 2008 SP Legendary Cuts Dave Parker jersey to 25, and a 2008 Legendary Cuts Smoltz/Lincecum dual jersey. None are for trade right now, Parker and Madlock will head into their respective PC's. I really like Mauer and Lincecum, and these are my first of anything of either of them.

I really enjoyed the last trip to the shop. I like going there, it makes me feel even better then when you order something online. Thanks dad for buying and See Ya! (on Wednesday or Thursday, maybe Friday!)
Posted by Drew at 8:45 PM