Hey guys, Drew back here. I am starting to fall a little behind but I'm in decent shape right now. By the way, I got an RTS from Phil Coke yesterday, wrong address, my bad. I'll try him again during the season. Anyway, got 3 packages to share with you, the first is courtesy of William from foul bunt. This guy is one of the best guys I've met on this blog journey, he and I have made several trades and have talked quite a bit through email. He invited me into his fantasy team and sent me an extremely long email about not making the team. He sent me some cards out of kindness and I got them yesterday. Here they are: 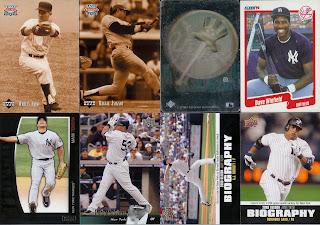 Here we have some nice oddballs from 1995 of Whitey Ford and Reggie Jackson. Never seen them before and they look cool. Next is a cool looking hologram followed by a 1990 Fleer Dave Winfield. I love the shot on that card and is a favorite in my Winfield catalog. On the bottom row, we have a 2009 Unique Teixeira, I have the red parallel and now the base as well. Lastly, 3 2010 Upper Decks, a Melky base, a Burnett Biography, and a Cano biography that I needed for the PC. 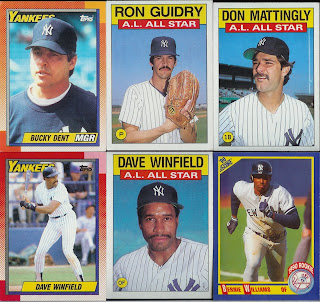 In this group we have 2 1990 Topps, Winfield and Bucky Dent, and 3 1986 All Stars, Winfield, Mattingly, and Guidry. I needed the Mattingly so that's awesome. The last one in this group was a 1990 Score Bernie rookie card. This is a nice shot though I would've preferred a braces shot, it cracks me up to see him in braces when he was a rookie. That is a nice card no doubt! 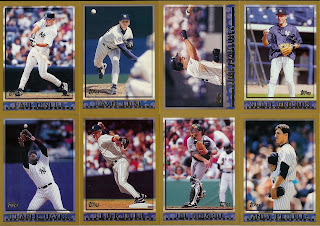 And finally, here are a bunch of 1998 Topps from a recent break. I don't think I had one single card from this set beforehand, so a chunk of Yanks is nice. The Pettitte is my favorite with the Tino and Jeter at a close second.

Thanks so much William! On to the next one... 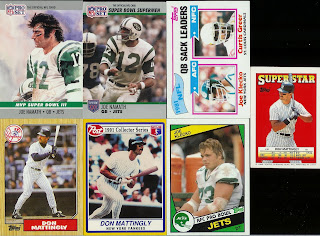 Another Sports Card Forum trade! This one landing me a few Kleckos and Namaths, as well as a few Mattinglys. The upper left Namath is my favorite of the bunch, the picture is amazing! I also like the Post Mattingly. Thanks SCF dude!

And since I should be going to bed and in a rush, here's the last package I'll show ya, a very special one from today. 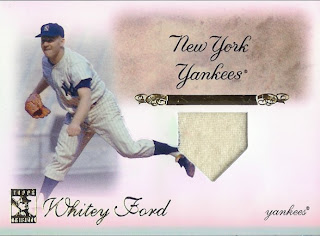 Yep, that is a 2009 Topps Tribute jersey card of Whitey Ford. I know you're oooowing and aaahing at it right now so I'll let you look at it for a sec.