Hey guys, Drew back here. Yesterday I had my friend stay over so I was kinda busy, so I have a little catching up to do. I have stacks of cards waiting to be posted, and one awesome TTM success. We'll start with the biggest stack, from Justin of Is This a Wasteland- No It's Tampa Bay Sports. Justin contacted me a while back letting me know of some 2010 Topps I needed. He sent me a small little stack that I never got to post, and since we are going in order here, here is what was in that group: 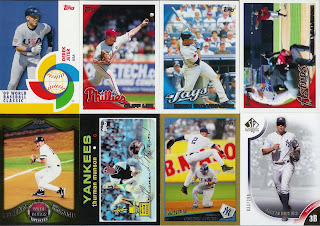 Here we have a Jeter WBC card I needed from 09 Topps, the 3 cards I needed from 2010 Topps (Cliff Lee, Vernon Wells, Valverde), a Wade Boggs Legends of the Game with a great pic, a Munson CYMTO I needed, and 2 numbered cards. A Jeter gold parallel from 09 Topps numbered to 2009, and a A-Rod numbered to 399 out of 2009 SP Authentic. 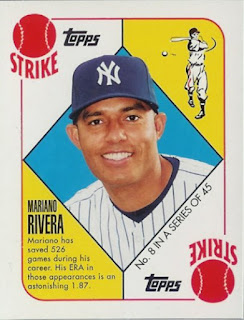 My favorite card in the package however was the one right above, of the Sandman. This is part of the 2010 Target only retro variations things, and it's my 1st so far. I'm hoping to get a few more soon of the Yanks. These are about the size of the 08/09 Goudey minis or the 07 Goudey base cards, and they are very cool retro designs.

So, after he shipped out the 1st bunch, I noticed he was giving away all his football cards basically for each team. I took the Jets away from him, and next thing you know I find a blaster box of 2010 Upper Deck wrapped up in my mailbox, full of Jets and a few Yankees. Take a look at the stacks! 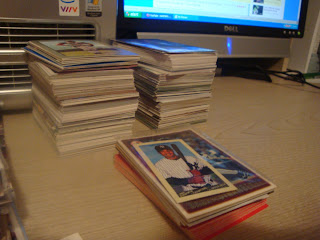 Jeez. I didn't know what was coming! It's payback time no doubt, but before I seek greatful revenge here are a few of my favorites from the never ending stacks of football and some baseball cards! 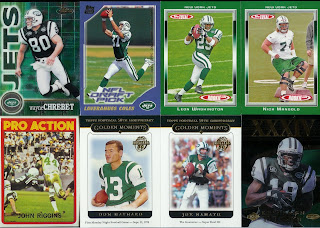 Since I'm lazy I only picked my most favorite cards for this, and here is the first scan. There's a sweet Finest Chrebet, a Coles rookie, multiple Leon Washington and Nick Mangold rookies, a very nice old school John Riggins in great condition, nice Maynard and Namath inserts from 05 Topps, and a cool Keyshawn. On to group 2... 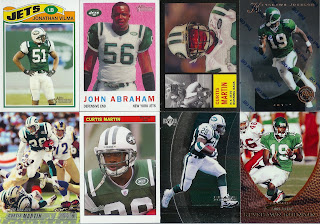 Justin sent me a bunch of Topps Heritage football including the big highlight of the package coming up soon. This set is nice and I never really saw it. Along with many others, I scanned a Vilma, a John Abraham, and a Curtis Martin here. A couple nice Keyshawn's are in this one and some Curtis Martins. 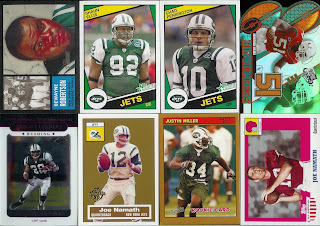 Next are a few more nice ones from that Heritage set, DeWayne Robertson, a Jet favorite of mine, along with Shaun Ellis and Chad Pennington, another big favorite of mine. The Vilma Press Pass rookie in the Top right is a sweet looking card, and is probably my favorite card of his that I own. On the bottom there is a nice Curtis Martin chrome, a Justin Miller gold Bazooka rookie and 2 beautiful Joe Namaths. The one of Joe Willy in his Alabama uniform is so cool, and I really like it. 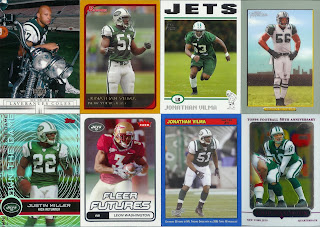 Ever wonder what football and motorcycles have in common? If so, ask Laveranues Coles, maybe he knows. The Justin Miller insert is nice, it sucks that we don't have him on the team anymore, he was a beast. 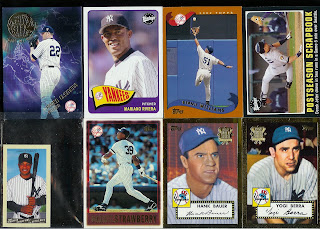 In the small baseball group he included almost an entire team set of 1990 Donruss baseball and I'm not gonna post those but I do really like them. Instead I scanned a few others, including a nice Clemens insert, one of my favorite Riveras, a nice shot with Bernie, Jeter getting hit unfortunately, and on the bottom row, the Cano mini from Goodwin, a Strawberry, and 2 reprints of Hank Bauer and Yogi Berra. With the D-Straw, I would say that is my very first card from 1997 Topps, it's shocking yet I think it's true. 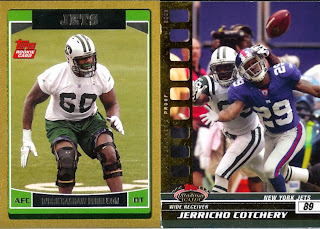 The highlights of this huge pile of cards are these numbered cards and the card below. The left card above is a DaBrickashaw Ferguson rookie card numbered to 2006. Da Brick has finally started to develop and that is a very nice card. The right card above is of Jerricho Cotchery from 2008 Stadium Club football. It's only numbered to 50 and it's the gold photographers proof insert. The picture on this card is really nice, what you expect from this product, and Cotchery is a beast. I've enjoyed watching him the past few years, he's not Larry Fitz or Randy Moss but he is pretty darn good, as a second receiver especially. 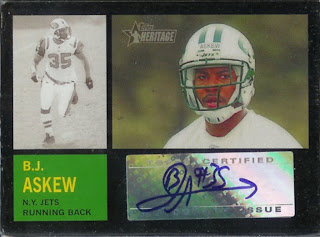 The highlight of this package is from that Topps Heritage football set and is an autograph of former Jets fullback B.J. Askew. B.J. has a great signature and it is my first auto of his. The sticker is crooked and drives me crazy but I like this card a lot and it fits well in my collection. This especially helps because I've seriously considered trying to get an autograph of as many Jets and former Jets as possible, since only a few will cost a lot (Revis, Sanchez, and of course Namath), and now I won't have to hunt down B.J. Askew.

Thanks SO much Justin and everyone please make sure to check out his blog, and you should try to see if your team is available for an amazing PC upgrade at his blog like mine! See Ya!
Posted by Drew at 6:58 PM