Hey everyone, Drew back here. It's been a long, grueling battle to get myself back to this blog lately, with all of the baseball and school work going on. I've had this long term science project to do on Extinction Level Events for the past few weeks, and it has been by far the most boring stuff I've ever had to write a paper on. Also, I had a scrimmage for my town league yesterday, and I ended up going 4-4 with 3 singles, a walk, 2 RBI, and a huge triple over the left fielders head. I also got my opportunity to pitch, and I went 2.1 innings of scoreless baseball in relief of my starter. I struck out 3 and allowed 2 hits and 2 walks. Late last night, I was playing manhunt at my friend's house, and I ended up hurting my back by turning it funny, so I'm pretty sure I pulled a muscle in it. Nonetheless, here I am now, finally ready and able to finish off the final post on the White Plains Card Show. Without further adieu, let us continue!

After Dad, Mike, and I got some quick lunch at Nathans, the indoor mini fast food restaurant the Westchester County Center contains, Mike and I jumped in line. We began to start talking to a fellow collector in line, who was familiar with our school, and actually looked pretty familiar. He ended up being the father of a girl in our freshmen class, and we didn't even know that until he notified us of that just a minute or so before we began to meet some players. It was pretty cool to see a local collector at a card show, especially one with as many cool collecting stories as he did.

So, the first player I met was former pitcher Luis Tiant! Tiant was a 3 time All Star throughout the mid 1960's to the early 1980's, and he was best known for his stint with the Red Sox. A famous moment etched into Yankees lure is when Bucky Dent hit his memorable home run, which was actually given up by "El Tiante". He also pitched for the Yankees in 1979 and 1980, and is subjected in the 2009 ESPN film "The Lost Son of Havana", displayed in Cuba, where Tiant was born. 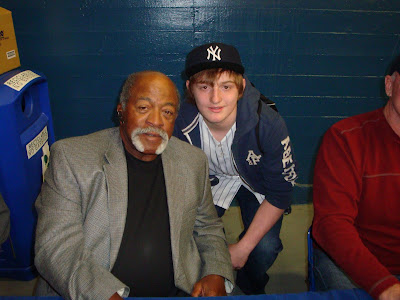 I went up to Mr. Tiant, who must have been battling a cold, because outside of the few seconds he took to shake my hand and sign my card, he couldn't go without holding his tissues and sneezing right in front of me! 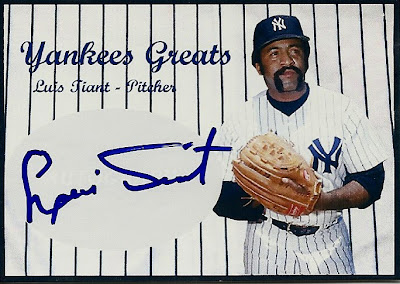 I didn't get to say a whole lot to Mr. Tiant, but I did walk away with this very nice looking signed Yankees custom I made of him. Tiant has a pretty cool looking signature, and it is now my second autograph of his in my collection, after I bought a triple autograph of Ron Guidry/Goose Gossae/Tiant a while back. 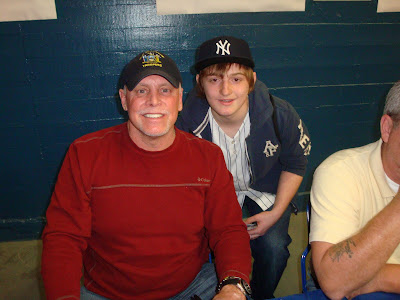 As I walked down the line of former players, the next I met was former Yankee Ron Blomberg. Blomberg began his career in the late 60's, but played until the end of the 70's. He was a solid player all around, but he was most known for being the first player to play the Designated Hitter position in MLB history! Blomberg was a really cool guy and he really liked the looks of my custom I made for him to sign. While he wasn't the biggest name I met, I'm pretty sure he was my favorite one of the day! 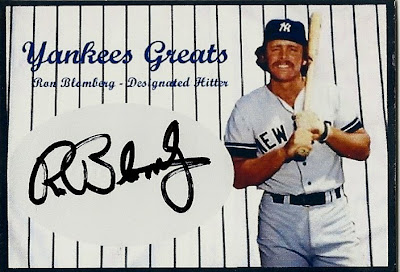 Here's a scan of my card signed by Blomberg. I really struggled to find a good picture of him, but I don't think this one looked too bad. 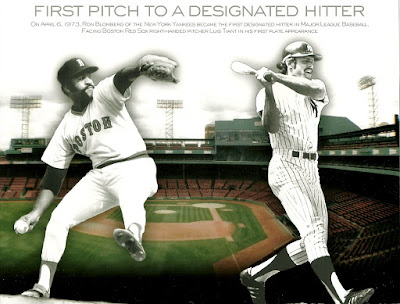 As a special bonus to buying tickets for both Tiant and Blomberg, you could receive this 8x10 photo of the 2 of them together for free! It would've looked nice signed but I had other intentions with the autographs anyway, so I'm good with just the picture. Tiant had actually been the first pitcher to face a designated hitter (Blomberg) in history, so it was a cool little piece of information. 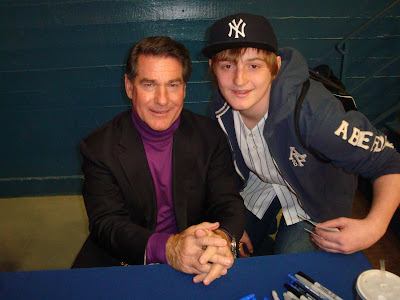 Next was Steve Garvey, the player I spent the most $ to meet that day. Garvey had been a 10 time All Star, 4 time Gold Glover, and the 1974 NL MVP back in his day for the Dodgers. He had been a part of one of the best infields of all time, the infield consisting of Dodgers: Garvey, Bill Russell, Ron Cey, and Davey Lopes. With 2,599 hits, 272 home runs, and a lifetime batting average of .294, in my opinion I think he should have a plaque in Cooperstown. Anyway, he was a very nice man, and he seemed like he was a fan of my custom. It was hard to tell how much he really wanted to be there, but I think he was fairly content with signing for the fans. 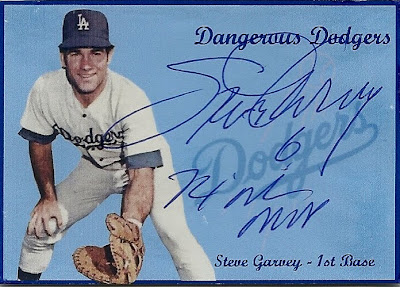 I took advantage of the "1 Free Inscription" deal, and got Garvey to write "74 NL MVP" under his autograph and number. It looks fairly good, maybe it would have been better if he used sharpie instead of just a plain blue pen. 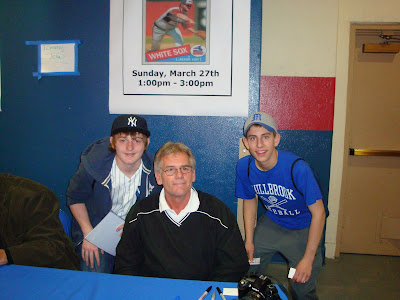 Following Garvey, we took a little break, but then headed in line to meet 2 more guys, the first being the freebie of the day, former Cy Young winner LaMarr Hoyt. Hoyt used to rock a huge beard during his hey day in the 1980's, but since then it has all disappeared. He didn't really say much, but he wasn't a jerk, so I'm fine with that. Dad found me an extra autograph ticket laying around on the ground earlier, so I was able to also get an 8x10 signed along with the custom. 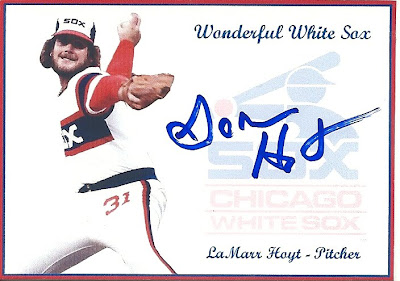 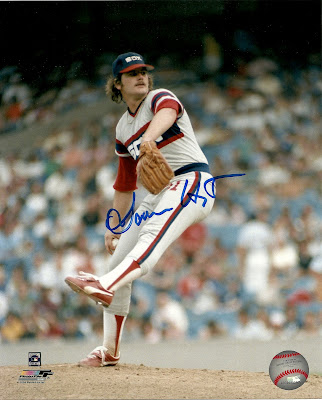 Outside of the awesome looking White Sox uniforms, there is nothing overly exciting with this guy. He had actually been arrested 4 times due to drug problems throughout his career, but since he's been drug free. I must say though, I don't get that autograph at all, because it looks like it says "Don/Son Hoyt" rather than LaMarr. Still nice adds to my collection though. 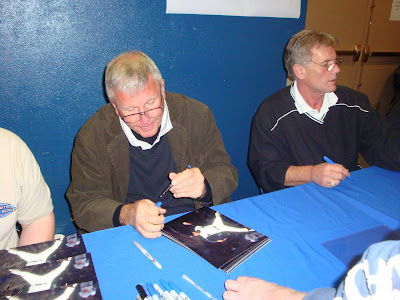 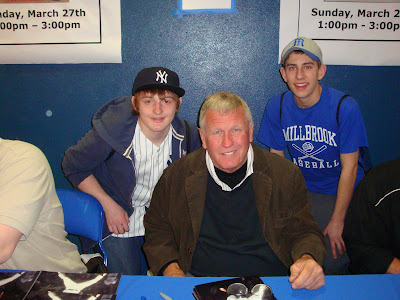 Finally, the last player we met was former All Star pitcher Tommy John! While of course he is well known for the surgery named after him, frequently now given to pitchers that had similar arm problems to him, he was a heck of a pitcher from the 1960's to the late 1980's. He won 288 games, the 26th most of any pitcher in baseball history. He made 4 All Star teams, and pitched for the Yankees in 2 stints in the 1980's. He is often found in the same boat with former pitchers Jim Kaat, Bert Blyleven, and now Mike Mussina and Andy Pettitte, in the group of pitchers that have good stats but perhaps not good enough for the Hall of Fame. The borderline guys. Blyleven of course made it into the Hall this past year, so maybe it'll soon be John's turn. 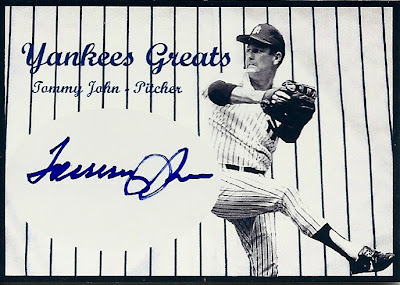 John was a fairly nice guy, but he seemed very caught up with signing 8x10 photos for something, maybe the mail order or something. He looked up quick to talk to me about my card and shake my hand, and took a picture with Mike and I, but other than that, he was signing his hand off. It seemed like a lot of the guys from the show had their hands full that day. However, the custom looks great and I was really happy to be able to meet him.

But that's not all! Outside of the 5 guys I had the opportunity to meet that day, I also sent in a mail order request to get a card signed by someone signing the previous day. I would have preferred to go on the Saturday rather than the Sunday, but dad had to work Saturday so I was in desperation to get one of the guy's autographs. When I was getting ready to send it out, I checked the website one last time and realized that the card needed to be at the place by the next day or else it wouldn't get signed. So, I had to pay 20 bucks extra on shipping just so the card could get there in time. Unfortunately, I had to pay a ton just for a single card to get signed, but now that I have it, I don't have to worry about getting his autograph again! 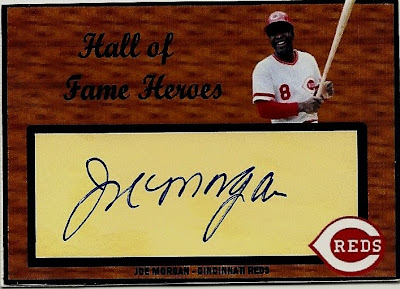 The card was signed by Reds Hall of Famer Joe Morgan! Morgan may be one of the most awful announcers of all time, but when he was a player, he was terrific. A ten time All Star, 2 time World Series champion, 2 time NL MVP, and a 5 time Gold Glover makes him perhaps the best 2nd baseman of all time! He was a tremendous player all around, and could hit for power, a very often hard to find feature in a second baseman. Today, it's very hard to find a second baseman that will hit some home runs, so it goes to show how good of a player he is.

Morgan had never been much of a TTM signer, so I knew that when I had an opportunity to get his card signed, even for the price, I knew it was worth it. He is now the 8th player in my Hall of Fame set, joining: Feller, Doerr, Snider, Bunning, MacPhail, Irvin, and Kiner!

All in all, even though I came home dirt broke, with not a dime in change, I bought a lot of really nice cards and met some former great players. We all had a blast and as always, can't wait for the next one!