Revealing the Mysterious Binder... A Little At A Time... Say Hey Willie Edition!

Hey guys, Drew back here! I'm back to continue the mini-series I recently started, having to do with an incredible binder of cards that my dad got from a lady on Craigslist. She couldn't have found a more responsible and caring collector to pass her deceased father's collection down to than me, and I really appreciate all that she did for my collection! This time, we honor one of the/if not the greatest player to EVER play baseball, Mr. Willie Mays!

Mays played 22 seasons in his MLB career, spanning from 1951 to 1973, with a brief break in 1952 and all of 1953 when the Army drafted him for the Korean War. He spent over 20 seasons of his career with the New York/San Francisco Giants, and played the remainder of his games for the Mets. Of course, his 660 career home runs ranks him 4th of all time, behind Barry Bonds(*), Hank Aaron, and Babe Ruth, and his 3,283 hits ranks him 11th all time. He made 24 All Star teams, won 12 Gold Glove awards, 2 MVP Awards, a World Series Championship in 1954, and made some of the greatest plays of all time! To say that the "Say Hey Kid" is the greatest all around player baseball has ever seen can easily be backed up and agreed with! 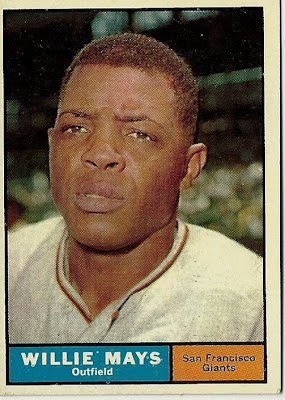 We begin with Willie's 1961 Topps card! First off, this is a very good card for me to have, as it fills one of the biggest holes in my huge 1961 Topps set wantlist, but second, its a great card. Maybe had Mays been wearing a hat or looked a little more awake this card could have been nicer, but its still a card of Willie Mays! The card isn't in mint condition but it looks presentable, so that's fine with me. As long as it's not absolutely destroyed, I'm more than happy to add any vintage card. 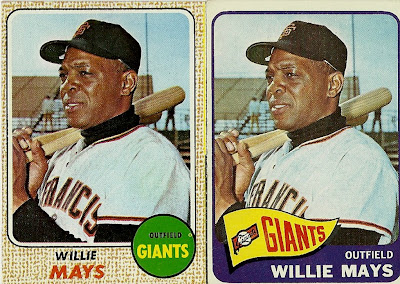 Next are 2 cards that feature the exact same photo, Mays' 1968 and 1965 Topps cards. What a dumb move by Topps to use the same photo, especially one that he's not even looking in. It does make it easier to compare designs, and in this case, 1965 Topps obviously is my favorite of the 2. The scan cut off part of the right hand side of the 65 card, and both of the cards are in nice shape. 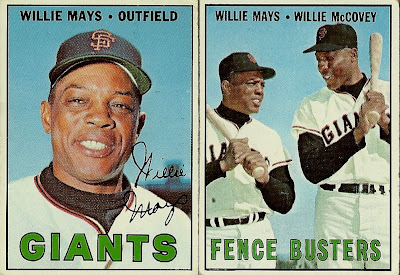 Lastly, here are 2 amazing cards from the 1967 Topps set. On the left is a beautiful base card of Mays, by far my favorite of the Mays cards I own. Everything is done perfectly on the card and its in great condition. On the right is a "Fence Busters" card featuring Mays and his slugging partner Willie McCovey! McCovey may not have been as legendary as Mays, but he also hit 521 homers in his career, and to say the two players are "Fence Busters" when they combined for 1,181 home runs in their careers makes 100% perfect sense!

I actually recently watched an interview with Mays on the MLB Network. The "bitter and mean" person that many collectors make him out to be disappeared for a nice interview with Bob Costas, and it was really great to watch. God bless Willie Mays, now at 79 years young, The "Say Hey Kid" will always be remembered!